We Shall Not Sleep 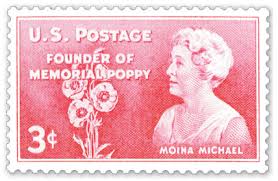 “There’s rosemary, that’s for remembrance.” While Ophelia associated rosemary with memory, a 20th century woman used another flower to evoke the echo of yesteryear.

Memorial Day weekend is a holiday that signifies sales at malls, barbecues, and fireworks. Too often overlooked is the somber shadow that led to its creation.

Moina Belle Michael, born in the appropriately named Good Hope, Georgia, was one of seven children of a former Confederate soldier. In 1918, in The Ladies Home Journal, she read Canadian John McCrae’s article “In Flanders Field” that alluded to the bloodiest battlefield of World War I. Despite the carnage, poppies proliferated, a blanket of scarlet between endless rows of white crosses. Moina viewed his words as a metaphor that beauty exists even in the darkest of times. Inspired, she composed a poem of tribute, “We Shall Keep the Faith,” and she, from that time on, wore a poppy.

Moina, a professor at the University of Georgia, taught a class of disabled veterans. To generate money for her students, she launched the idea of selling silk poppies. Her campaign spread to other countries; today, it generates thousands of dollars for charitable causes and serves as a symbol to the world to reflect upon the cost of war.

In her honor, the navy launched the SS Moina Michael; the U.S. Postal Office released a commemorative 3-cent stamp; the government named a highway after her; the Georgia Women of Achievement Hall of Fame inducted her as a member. The Poppy Lady took to heart the words, “If ye break the faith with us who die/We shall not sleep.”