In the olden, perhaps more golden days, the colors associated with October were the yellow and red of autumnal leaves, gourds of orange. The month is also related to pink, the favorite shade of a woman who succumbed to a dreaded killer.

Eleanor Goodman, a Jewish homemaker in Peoria, Illinois, raised her daughters with the message, “Fix what is wrong with the world.” Understanding her words, the sisters arranged for a backyard fundraiser for a friend stricken with polio. Susan was in charge of selling tickets while Nancy’s role was to sing Rosemary Clooney songs. Nancy had believed she was fabulous until Susan told her that next time she would be the singer, and Nancy would be the organizer. Although the younger sibling, Nancy was the problem solver; when big sis broke a curfew, Nancy convinced their father that their clock did not keep accurate time. 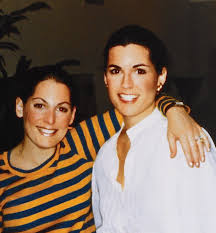 Susan was her high school’s homecoming queen and married her college sweetheart, Stan Komen, with whom she had two children. Nancy took the career path and moved to Dallas where she became an assistant couture buyer at Neiman Marcus.  She married Robert Leitstein, the store’s executive and had Eric, her only child. In 1977, Susan phoned: the Goodman’s family doctor had detected a lump in her breast. Embroiled in a divorce and custodial issues, Nancy flew home to Peoria. Three years later, the thirty-six-year old Susan’s dying request of her sister was to “fix what is wrong with the world,” to do something to save other women from her fate.

On Valentine’s Day, in 1981, Nancy married Norman Brinker, founder of Bennigan’s and Chili’s Restaurant chains. The newly minted Mrs. Brinker could have settled in a niche as the wife of a multi-millionaire-but she had a promise to keep. Her husband told her not to pester his wealthy friends; Nancy invited them to her home to raise money for the Susan G. Komen Foundation. Oil rich Texans donated a $1,000,000. The momentum of the cause suffered a setback when Nancy came down with breast cancer. Aware that her femininity was not tied into her bra size, and that failure to do so had led to Susan’s death, she commanded her doctor, “I want them both off today! Get them off me!”

After she had regained her health, Nancy was jogging when a vision came to her, of hundreds of women running for the cure, wherein sponsors would contribute money for each mile run. On the first Komen Race for the Cure, on a drizzly Dallas day, eight hundred participants took part. Within years, millions of women have participated, and the races have garnered over a billion dollars. The logo of the foundation is a pink ribbon fashioned to look like a runner in motion. For one event, the organization distributed t-shirts with the caption, “If you’re going to stare at my breasts, you could at least donate a dollar to save them.” Under the auspices of Laura Bush, the White House went pink, police used pink handcuffs, the Dallas Cowboys assumed the hue.

Refusing to be derailed by the end of her second marriage, Nancy served as the Ambassador to Hungary. During her tenure, she organized a cancer fundraiser in which hundreds of women marched along Cahin Bridge, illuminated with pink lights. The Goodman sisters had truly learned their mother’s lesson, the Jewish concept of kindness to repair the world, Tikkun Olam.