In the television series Seinfeld Jerry stacked his kitchen shelves with cereal, ordered Cheerios at Monk’s Coffee Shop, said it was what he would miss most in prison. He stated of its appeal, “I like the idea of just eating and drinking with one hand without looking.” If Jerry had contemplated the genesis of his breakfast of champions, he would have discovered that W. K. Kellogg’s life had more than its share of snap, crackle, and pop.

Will Keith was the seventh of sixteen children, raised in Battle Creek, southern Michigan, in 1860, to Seventh Day Adventist parents, Ann and John Kellogg. In his early teens, Will dropped out of school and worked as a broom salesman for his father. In 1880, he married Ella Davis, with whom he had five children. He later found employment with his older brother, John, a doctor, the founder of the Battle Creek Sanitorium, (The San, derived from the word “sanitary,”) the first institution dedicated to the pursuit of health. John worked seven days a week, without a vacation-his brother did not believe in them; although the sanatorium made $4,000,000 annually, his salary was $87.00 a month. 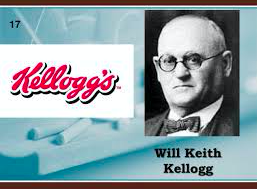 Famous folk seeking wellness at the San were Henry Ford, Thomas Edison, George Bernard Shaw, Amelia Earhart, John D. Rockefeller and Presidents Taft and Teddy Roosevelt. Dr. Kellogg, advocated a health plan that included peanut butter, (he was its inventor,) and five daily enemas. What he eschewed was meat, “a tide of gore,” and sex, “the sewer drain of a healthy body.” The doctor was a life-long vegetarian and, never consummated his marriage; (he adopted his forty-two children.”) Even more sinful was masturbation, “if illicit commerce of the sexes is a heinous sin, elf-pollution is a crime doubly abominable.” Fruit-loops, indeed.

In 1894, the brothers were experimenting with boiled wheat dough which they left to attend to other matters. Upon their return, the product was stale; hating waste, they ran the wheat through metal rollers that produced golden flakes rather than a solid sheet. The patients enjoyed the innovative food so much that John arranged for them to take some along for home consumption. The product became Battle Creek’s second greatest flake.

Will wanted to market their invention; however, John refused to put profit over principle. Another bone of contention: Will wanted to dust the flakes with sugar to stop it from tasting like “horse-food,” a notion that flew in the face of the doctor’s dietary restrictions. Branching out on his own, Will founded the Kellogg Company-each box carried his signature in red, cursive script-as well as the philanthropic W. K. Kellogg Foundation. A flurry of lawsuits and counter-lawsuits erupted between the battling brothers. What further infuriated the doctor was when a former San patient, C. W. Post, became a successful rival. The siblings, who both lived into their nineties, never reconciled. Battle Creek remains the cereal capital of the world where 200,000 tourists a year visit. The Kellogg plant has an oversized Tony the Tiger who serves as sentry.

The wheel of fortune turned for the Kellogg brothers: the Great Depression closed the doors of the San while Will became a multi-millionaire. His indulges was an Arabian horse farm in Pomona, California that he donated to found Cal Poly State University. He also had a harsh side: he excised his son John from the family business when he divorced his wife to marry a Kellogg secretary. For the last decade of his life, despite advanced age and blindness, John continued as overseer of his empire, accompanied by his German Shepherd, a descendent of Rin Tin Tin. The drama-worthy tale of the cereal wars, in Tony the Tiger parlance, can be summed up with his trademark utterance, “They’re Grrrrrreat!”