Tesla, the electric car, is a household name. In the nineteenth century, so was Nikola Tesla.  The genius’s star disappeared into the night sky until a modern-day visionary resurrected his life.

A contemporary of scientific greats Edison, Westinghouse, and Marconi, Tesla was an electrical engineer whose eccentric and enigmatic ideas transformed the world. He was born in Croatia, then part of the Austro-Hungarian Empire, in 1856 to father, Milutin, a priest in the Serbian Orthodox Church. While Milutin was an adherent of religion, Nikola was a devotee of science. As with Sheldon from The Big Bang Theory, Nikola was convinced of his brilliance: he memorized entire books, mastered eight languages, even greater accomplishments considering he was able to do while only sleeping a few hours at a time. The star student at the Polytechnic Institute at Graz, Austria, Tesla’s education ended after his gambling addiction resulted in the loss of his tuition. The situation brought on the first of his many nervous breakdowns. Tesla moved to Budapest where, while walking in a park, reciting poetry, a vision took hold of him. With a stick he drew in the dirt a diagram of a motor that would run without fossil fuel.

In 1884, in order to meet Edison, a penniless Tesla arrived on the docks of New York City. After an acrimonious dispute over $50,000, the two parted ways, and Tesla commented of his former employer, “He had no hobby, cared for no sort of amusement of any kind and lived in utter disregard of the most elementary rules of hygiene.” In contrast, Nicholas dressed in formalwear, and once fired a secretary for being overweight. The six-foot two, pencil thin inventor with the exotic accent drew women, but he never married as he felt celebrity sparked creativity and intimacy invited germs. 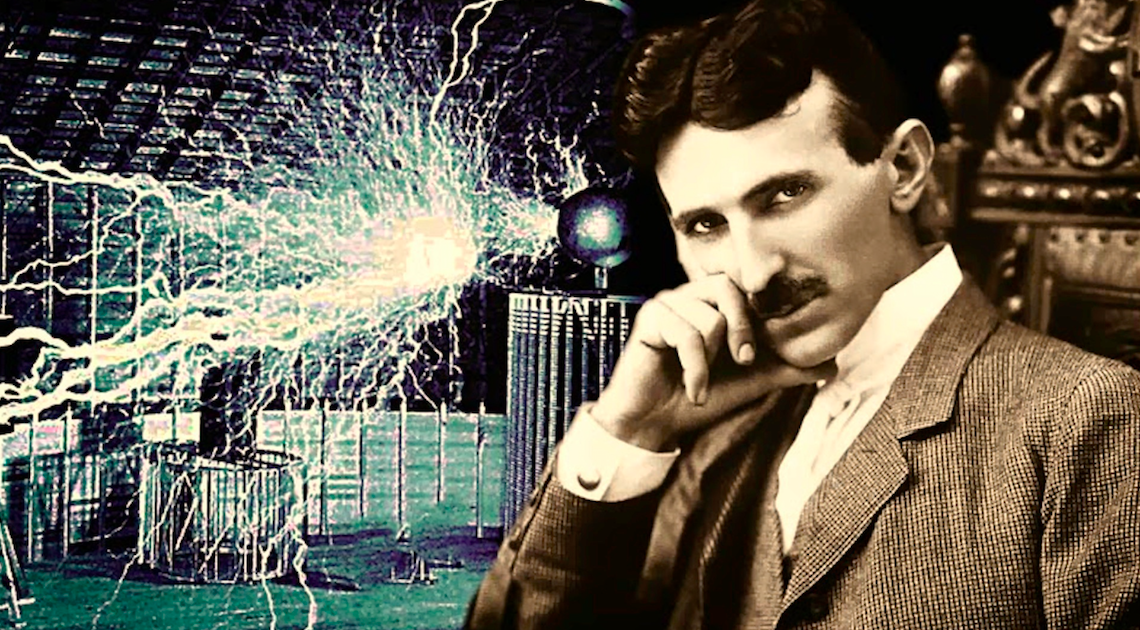 Undaunted, Tesla invented the radio, took out the first patent for a speedometer, and fashioned what would be known years later as a robot. He also proposed the developed of torpedoes before the advent of World War I, weapons later launched from submarines. At the World’s Columbian Exposition of 1893, Tesla illuminated more light bulbs than exited in the fair’ host city of Chicago. An offbeat celebrity, Mark Twain visited Tesla’s laboratory, Albert Einstein sent him a birthday card, and he graced the cover of Time Magazine in 1931.

Oddness increased with age; while dining at the Palm Room at the Waldorf-Astoria Hotel, he polished the already gleaming silverware, always using eighteen napkins. Other idiosyncrasies were a love of numbers divisible by three, and he explored time travel. His bizarreness prompted his financial backers to pull the plug on investments. Nikolas spent his final years in the New Yorker Hotel, (Westinghouse picked up the rent,) and he made daily visits to a park to visit the pigeons he considered his closest companions. The scientist would have become a forgotten scientific footnote, except for an invention that occurred almost a century later.

Martin Eberhard was in Disneyland, having dinner at the Blue Bayou, a restaurant nestled near the Pirates of the Caribbean attraction with Carolyn, his future wife. Their conversation revolved around his idea to launch an electric car company. He had the idea and just needed to come up with a name. He broached his idea of christening his corporation after the genius who had created the AC induction motor- the wind beneath his new vehicle.

However, the man who truly got Tesla off and running was Nicolas’ spiritual descendent, the South African-born Elon Musk who made his first millions by co-founding Pay Pal. He shared the Serbian’s genius as well as his quirkiness: he has plans to colonize Mars and named his sixth son X AE A-12 Musk.

In 1997, Steve Jobs saluted those who thought outside the box, “Here’s to the crazy ones. The misfits. The rebels…Because the people who are crazy enough to think they can change the world, are the ones who do.” Jobs’ words part of Apple’s famous 1997 ad: “Think Different.”