“Curioser and curiouser,” Alice cried as she tumbled down the rabbit-hole. Her words summarize the relationship between an Oxford mathematics professor and his child muse.

Alice met the man who impacted her life when her father, Henry George Liddell, the dean of Christ’s Church Oxford, invited Charles Dodgson to his home. The lonely bachelor, who only lost his stutter around children, became a beloved surrogate uncle to Henry’s three daughters, Lorina, Edith, and Alice. An avid photographer, Charles captured the image of the eight-year-old Alice in numerous portraits; his most well-known work showcased her as the scantily clad beggar maid from an Alfred, Lord Tennyson poem. 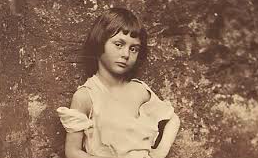 Literary immortality occurred on July 4, 1862, when Dodgson, along with the Reverend Robinson Duckworth, took the Liddell sisters for a rowboat ride along the Thames River. To keep the youngsters entertained, the professor made up a story of the adventures and misadventures of a little girl named Alice. Thrilled she was the namesake, Alice begged Charles to write it down as a proper book. That year, for Christmas, Dodgson presented her with his handwritten manuscript, along with illustrations, entitled Alice’s Adventures Under Ground. All the members of the boating party made an appearance: Alice, the protagonist, Dodgson, the dodo, the Reverend Duckworth, the duck, Lorina, the lorry, Edith, the eaglet.

Encouraged by the children’s enthusiasm, Dodgson submitted his work to a publisher under the pen name, Lewis Carroll. The book, renamed Alice’s Adventures in Wonderland, proved so popular Queen Victoria requested he use her name in his next book’s dedication page. A century later, The Beatles placed Dodgson on the cover of their Sgt. Pepperalbum between Marlene Dietrich and T. E. Lawrence. Alice and her crew of the Mad Hatter, the White Rabbit, the caterpillar, became the centerpiece of the world’s most famous tea party.

The demise of wonderland arrived when Mrs. Liddell became an enraged Red Queen who gave her variation of, “Off with his head!” She forbade Dodgson to have any contact with her family, and threw his letters to Alice in the fire. The abrupt end of their relationship was enough to wipe the grin off the Cheshire Cat’s face. What the mama saw has never been made public as the Liddells never offered an explanation; after Dodgson’s death, his family ripped out the pages from his diary concerning the banishment. The enigma surrounding Dodgson remains if he were a Nabokov who lusted after young girls, and did more with Alice than talk about cabbages and kings, or if he were a shy man trying to regain his own lost youth by immersing himself in the world of childhood innocence.

As a young woman, Alice had an affair with Leopold, the Prince of Wales, and later married Reginald Hargreaves in Westminster Abbey. However, her later life was far afield from wonderland. She had three sons, two of whom died in World War I; the third, Caryl (an interesting choice of name) became a prodigal son who frittered away the fading family fortune. Her husband, who had a habit of visiting brothels, passed away in the midst of financial woes.

In need of money, at age eighty, Alice travelled to America where she sold the manuscript Charles had presented her as a child. During her visit, Columbia University presented her with an honorary degree. In regard to the truth of Charles’ obsession with Alice lay in what he saw in his own looking-glass.