“When Johnny comes marching home again/Hurrah! Hurrah!” The lyrics originated from a Civil War song that welcomed the soldiers returning from the Civil War. During World War II, when the men left for Europe, it led to another “Hurrah!” This time it was for the women who traded aprons for overalls, exchanged frying pans for drills.

When Japanese planes attacked Pearl Harbor, thousands of men rushed to recruitment offices that left a dearth of workers in factories. In response, Uncle Sam initiated a concerted campaign to convince women to enter the work force.

One of those who heeded the call was Naomi Fran Parker, from Tulsa, Oklahoma, one of eight children of Esther and Joseph. Her father’s job as a mining engineer led them to move around the country, and they finally settled in Alameda, near San Francisco. The 18-year-old Ada, and the 20-year-old Naomi, obtained jobs at the nearby Naval Air Station, where they used their newly acquired skills of drilling and riveting.  An Acme photographer took a picture of Naomi leaning over a machine that became a popular 1942 image. The caption read, “Pretty Naomi Parker looks like she might catch her nose on the turret lathe she is operating.” Ada, tickled pink to see her sister in the local newspaper, hair secured by a red polka dot bandana she had purchased at a five and dime store, kept a clipping as a souvenir. 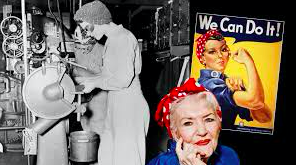 The genesis of an image that became an integral part of Americana began with a 1942 song, “Rosie the Riveter;” Rosie was the generic name that represented the women who “manned” the factories. Artist Norman Rockwell, inspired by the lyrics, painted his rendition of Rosie that appeared on the cover of the Saturday Evening Post. His heroine cradled a riveting machine, her penny loafers rested atop a copy of Hitler’s Mein Kamph (My Struggle). Her lunch box bears the name Rosie. Sotheby’s auctioned the painting in 2002 for almost five million dollars.

Westinghouse Electric Corporation commissioned Pittsburg-based artist, J. Howard Miller, to turn the photograph into a morale boosting poster. He illustrated her wearing a red, polka dot bandana, rolled up sleeve that showed a flexed bicep. The blue-shirted bombshell was a combination of sex appeal and sass. Miller’s poster circulated in Westinghouse factories and then disappeared.  However, in the 1980s, the National Archives in Washington featured its poster in one of its exhibits. The image struck a national chord and Naomi/Rosie’s image proliferated on coffee mugs, T-shirts, calendars, emblematic of the burgeoning women’s movement.

In 1943, Naomi left her job to marry Joe Blankenship with whom she had son, Joseph. The couple settled in Palm Springs where Naomi worked as a waitress in The Doll House. After their marriage dissolved, Naomi wed John Muhlig, and, with his passing, took a final trip down the aisle was with Charles Fraley. Naomi found her career path when she became an ordained minister. Once again a widow, Mrs. Fraley moved in with her sister Ada, who she had always considered her best friend.

Seventy-five years before her passing at age ninety-six from cancer, a riveting photograph had made Naomi’s likeness a slice of Americana. Marge Simpson donned Rosie attire in an episode of The Simpsons ;  The New Yorker Magazine featured Rosie on its cover, red bandana replaced by a pink pussy-ear knit cap, and her likeness graced a U.S. postage stamp. Miller’s caption on his poster became a feminist manifesto, “We Can Do It!”