In Shakespeare’s play Antony and Cleopatra, Antony said of Cleopatra, “Age cannot wither her, nor custom stale/her infinite variety.” While the Roman general was waxing poetic on the Egyptian queen, his words aptly apply to an Italian woman whose allure has proved timeless. Who was the lady who ended her days in a convent, hung in Napoleon’s bedroom, and was the subject of an international manhunt?

Perched high in Room 711 at the Louvre in Paris behind bullet proof class, the Mona Lisa is the world’s most valuable painting, her secretive smile beguiling the millions who make pilgrimage to pay homage.  Lisa Gherardini was born in Florence in 1479, and at age fifteen, her father, having fallen on hard times, arranged for her marriage to the thirty-year-old wealthy widower, Francesco del Giocondo. He was a silk merchant who derived additional income through selling Moorish slave girls from North Africa that afforded the couple a life of affluence. Lisa became pregnant shortly after her marriage, and eventually gave birth to three sons and three daughters. One son did not survive infancy; Piera, died at age two.

Lisa’s rendezvous with immortality occurred with her acquaintanceship with Leonardo da Vinci who she knew as her grandparents lived near the artist’s home. The painting he made of the local matron became known as Mona, a term of respect for Madame, and the sitter’s first name, or, alternatively, as La Giacondo. 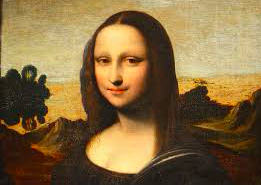 The couple’s third child took vows at the age of twelve and went by the name Sister Beatrice in the same nunnery as Lisa’s two sisters, Sister Camilla and Sister Alessandra. Authorities falsely claimed that Sister Camilla had engaged in “obscene acts” with men, but a church court dismissed the charges. Lisa avoided a similar scandal by spurning the advances from two men from the Medici family. Her husband worried that her action would lose his standing with the powerful dynasty. After falling ill in her 60s, the widow spent her later years with her daughter in The Convent of Saint Ursula in Florence, and she passed away in obscurity in 1542 at age sixty-three. Her name was confirmed in 2005 when Armin Schlechter, art historian at the Heidelberg University Library, chanced upon a 1503 marginal note in a book where the Florentine civil servant, Agostino Vespucci, wrote that Leonardo is working on a portrait of Lisa del Giocondo.

Da Vinci left for France where a train of mules carried his possessions, including the canvass he knew was his masterpiece. When he passed away, he willed the painting to his assistant who sold it to the French King Francis I for the equivalent of $10,000,000 in contemporary currency. The royal hung the da Vinci in his six room bathing suite in Fontainebleau, and it later landed in the possession of King Louis XVI and Queen Marie Antoinette. After they met their fate at the guillotine, Napoleon Bonaparte had, who he called, “Madame Lisa,” displayed in his bedroom. In 1815, the Louvre added her to its treasures. The Italian Vincenzo absconded with the canvass to Italy because he felt the country was her rightful home and, as he admitted, “I fell victim to her smile.” During World War II, the museum hid the icon from the Nazis. The British used her name as a coded message to the French Resistance, La Joconde garde un sourire. (The Giacondo keeps her smile.) Lisa left her sanctuary when First Lady Jacqueline Kennedy brought her to the White House. The insurance policy amounted to $100,000,000 ($608,000,000 today).

What remains unknown is the secret behind her smile that has led to the painting’s epithet, “The Enigma.”