In the 2003 episode of The Simple Life Paris Hilton claimed not to know about Walmart and asked if it were a place where “they sold wall stuff.” Although Paris does not frequent Walmart, millions do, oblivious to the fact that Samuel Walton, (the last three letters of his surname and the word ‘mart-’abbreviation for market) serves as the namesake of the megastore.

The embodiment of the American Dream was born in Kingfisher, Oklahoma, in 1918, the first of two sons of Thomas and Nancy Walton. Rags did not precede Sam’s riches as Thomas earned a decent income as a loan officer who repossessed hundreds of farms during the Great Depression. Thomas raised his boys on the mantra, “The secret is work, work, work.” Indefatigable, Sam was an Eagle Scout, state champion quarterback, and student council president that led the graduating class to vote him, “The Most Versatile Boy.”

At the University of Missouri, Sam was the president of the honor society and earned a bachelor’s degree in business as well as the nickname “Hustler.” After his 1940 graduation, he worked at J. C. Penny Company for $85.00 a month. On Valentine’s Day, 1943, Samuel married Helen, with whom he had four children, and served as a World War II naval officer.

Armed with a $25,00 loan from his father-in-law, Leland Stanford Robson, a wealthy Oklahoma banker, Sam and his brother, James, opened the first Walmart-across from a Confederate memorial, in Rogers, Arkansas, a small city in the Ozarks. The secret of the world’s wealthiest chain is apparent from the slogan emblazoned on Walmart trucks: WE SELL FOR LESS, ALWAYS.  The company’s logo, referred to as a spark, is symbolic of Sam’s inspirational moment that led him from a modest store proprietor to one of the world’s wealthiest men.

Despite being the modern Midas, Sam never lost his aw-shuck small town persona. He worked out of a cramped office with plastic décor, stayed in budget motels, and had home décor reminiscent of early Holiday Inn. Even as the possessor of $24 billion, he remained frugal and went for $5.00 haircuts, (no tip.) A passion hunter, during quail season, he waited in a Walmart line to buy shotgun shells- like any other customer- wearing his trademark Walmart cap, (now an exhibit in the Smithsonian Museum.)

As direct and no frills as his business, Sam began his days at 4:30 A.M. when he stopped at the Daylight Donut Shop for his favorite pastry, a raspberry rose. He obtained his pilot’s license so that he could fly to his far-flung stores. In his let-your-hair-down-moments he led executive pep rallies by standing on a chair while calling out the company cheer, “Give me a ‘W’! Give me an ‘A’! Give me an ‘L!’” “LOUDER!!!” In 1983, after losing a bet concerning a Walmart profit, Sam donned a grass skirt and performed a hula dance on Wall Street. 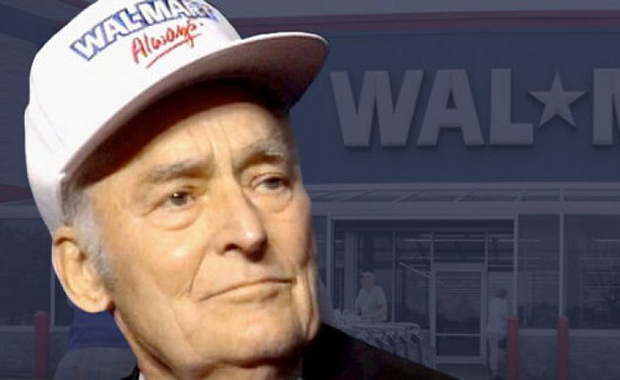 One afternoon, Sam was so distracted by counting cars in his store’s parking lot that he rammed into a Walmart tractor trailer. When Bentonville threw a Sam Walton Appreciation Day it included the 190-piece university marching band, twenty-two floats, one that included the wrecked car attached to the rear bumper of the injured Walmart truck. Another honor: in 1992 President Bush travelled to Arkansas to present the retail king with the Presidential Medal of Freedom.

The merchant of the masses held on to the reins of Walmart until he passed away from cancer in 1992 at age seventy-four. The state received almost nothing in taxes-Sam had divided his staggering wealth between Helen and his children. The man from small town America packed a powerful punch: currently there are 10,500 stores, 2.2 million associates, and his children have a combined fortune of $238 billion. The juggernaut can be attributed to Sam Walton’s Dustbowl work ethic that led to the mindset: TGIM: Thank Goodness It’s Monday.