Fans of Dennis the Menace would readily agree with the nursery rhyme’s contention that little boys are made of “Snips and snails/And puppy dogs’ tails.” For inspiration, the cartoon’s creator turned to the real-world mischief-maker, Dennis Ketcham.

The artist behind an American classic was Seattle born Henry King “Hank” Ketcham. In 1938, Hank dropped out of the University of Washington and hitchhiked to Hollywood. The Disney Studio hired him for $25.00 a week where he worked on Pinocchio, Bambi, Fantasia, and Donald Duck. In 1942, while in the navy, Hank married Alice Louise Mahar; Dennis came along in 1946. After his discharge, Hank bought a $12,000 Carmel, California, home.

On an October afternoon in 1950, while at his drawing-board, Alice stormed into his room, furious their four-year-old son had wrecked his bedroom. She yelled, “Your son is a menace!” The resultant rhyme-Dennis the Menace-led to the birth of the iconic comic strip that featured father Henry, mother, Alice, and neighbor, Mr. Wilson. Hank stated, “If I had named my child Charlie, I’d still be working for Disney.” 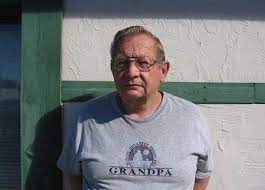 His column that featured the perennial “five-ana-half” year-old Dennis spread to a 50 million readership with syndication in 1,000 newspapers, in nineteen languages, in forty-eight countries, book deals, and a hit television series. Dennis’ freckled face appeared on Dennis dolls, greeting cards, and sundry Menaceabilia. In one strip, Dennis held up a fur-coat to his mother’s guest and proclaimed, “I showed Mrs. Taylor your new fur coat, Mom, but she didn’t turn green like you said she would.”

The juggernaut made Hank a multi-millionaire, but life came with heavy baggage for his son and muse. In 1959, while Dennis was at boarding-school, during his parents’ divorce, Alice died from an overdose of alcohol and barbiturates. Hank did not inform his son of his mother’s passing until after the funeral. A few months later, Hank married flight attendant Jo Anne Stevens, and moved the family to Geneva, Switzerland; their penthouse overlooked Harry Winston’s diamonds, and Patek Philippe’s fine watches.  Hampered by a foreign language, a learning disability, and animosity with his stepmother, Hank sent Dennis to a boarding-school in Connecticut. After Hank’s divorce, he married Rolande Praepost, with whom he raised two children in affluent Pebble Beach, California. Although Dennis attended their wedding, father and son became increasingly estranged.

In 1966, Dennis joined the marines and spent ten months in Vietnam and returned with severe post-traumatic stress syndrome. He drifted through a series of jobs such as tire re-treader, poultry-farm worker, and prison guard. A nine-year marriage to Roxanna Imes ended in divorce and a judge barred him from any contact with his daughter, Jennifer. He met his second wife, Janet, when they both worked at a J.C. Penney in Columbus. Their home was a trailer park in Grove City, Ohio.

For the last three decades of Hank’s life, he hardly saw his first-born, and Dennis never met his half-siblings. He only heard from his son once a year, when Dennis called to ask for money. Hank added, “I don’t want a closer relationship-nor do I want a confrontation.” Dennis’ rejoinder, “Dad can be like a stranger. Sometimes I think that if he died tomorrow, I wouldn’t feel anything.” Yet, a connection remained. The animator turned author sent Dennis a copy of his 1990 memoir, The Merchant of Dennis the Menace, in which he had inscribed, “To the REAL Dennis with love. Dad.”

A classic cartoon showed Dennis lying in bed as Alice read a story that ended, “and they lived happily ever after.” Dennis replied, “Except when they had to sit in the corner.”