“I figure when my husband comes home at night, if those kids are still alive, hey, I’ve done my job.” Roseanne Barr

Baby boomers whiled away untold hours watching television that beamed airbrushed portrayals of mothers such as ever so sweet Marion Cunningham. These Stepfordian housewives vacuumed while wearing heels, wore dresses replete with accessories, every hair in place. When their children arrived home, they indulged in home baked cookies, while their model moms listened to the recital of their days as if it were the Sermon on the Mount. Enter Roseanne.

The television trope of the ideal homemaker transformed to a more real one with the advent of a woman who cheerfully admitted she could not do it all, hell, not even come close. She was the self-proclaimed domestic goddess-turned comedian-turned sit com star. Clad in oversize sweatshirt and jeans-she unapologetically scarfed her variety of trail mix-Cheetos, M&M’s, and Caramels. In an era where thin-was-in, Roseanne was never embarrassed by her girth, never asked hubby if her jeans made her look fat. In contrast to past television mothers whose offspring could have arrived through immaculate conception, Roseanne waxed her blue-collar eloquence about her satisfying sex life. While in the 1950’s show, Father Knows Best, the patriarch was in the driver’s seat, in Roseanne the prevailing axiom was, “If Mama ain’t happy no one’s happy.” Adept at reading his wife’s emotional barometer, her husband, Dan, an oft unemployed construction worker, well understood the maxim. When Dan complains that he can’t find something-be it undershirt, car keys, or beer-lifting her eyes heavenward, Roseanne sighs over hapless husbands, “They think the uterus is a tracking device.” Unlike Ricky Ricardo, Dan would never dare tell Roseanne, (though in a midwestern voice rather than a Cuban accent,) “Rosie you have some splainin to do.” Rather than the traditional helicopter mothers whose Holy Grail is to serve as handmaiden to her family, when her son, D. J., complains that he has a knot in his shoelace, the maternal response, “wear loafers.” 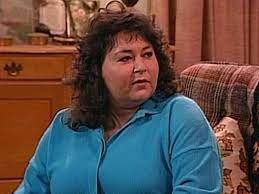 The Connors lived in a tract home on 714 Delaware Street, in Lanford, Illinois. Head honcho mama left spouse and three children for her job at Welman Plastics factory. When her foreman refused her request to leave an hour early although he agreed to half an hour with the comment, “But it’s coming out of your paycheck.” Roseanne’s rejoinder, “There goes the Porsche.” A Mother Jones figure to her female, assembly-line compatriots, she used a food metaphor to explain men, “A guy is a lump, like this doughnut. First you gotta get rid of all this stuff his mom did to him.” (She flicks off the pastry’s nuts). “And then there’s my personal favorite-the male ego.” So saying, she takes a big bite. The starcasm was often directed at Dan. When he asked if she ever regretted marrying him, her answer: “Every second of my life.” In her precious little free time, Roseanne fantasizes about a tidy house, children sans attitudes, a husband who does not think that washing dishes is the provenance of the female. On men doing the dishes, “What’s the matter, is Lemon Joy Kryptonite to your species?”

The series did not hesitate to deal with issues that other sit-coms refused to address such as teenage sex, adultery, the failure of Reagan trickle-down-economics. As Roseanne’s brother and sister are gay, the sitcom star gave airtime to the sympathetic portrayal of homosexual characters. The comic became an improbable feminist icon; as she put it, “a sort of post-feminist mud pie in the eye to the Super Mom Syndrome.”

The prickly personality, born in 1952, grew up in Salt Lake City, Utah where her father, Jerome, was a door-to-door salesman who sold crucifixes to Mexican neighbors.  At age three, Roseanne suffered from Bell’s palsy, and her mother, Helen, hired a rabbi to pray for her recovery. As there was no change in her condition, Helen turned to a Mormon bishop. After a miraculous recovery, her mother took it as a sign from God to raise her daughter as a Mormon. For Friday nights and Saturday Roseanne was Jewish; for the rest of the week, she was Mormon. At age sixteen, a car hit her and Roseanne’s head ended up impaled on the automobile’s hood ornament. She remained in a coma for several days. The doctors’ administered Thorazine and Roseanne spent a year in a Utah state psychiatric hospital. Of her hospital stay she reminisced, “It’s an incredible thing to have a group of insane people be your family for a year and someone’s always coming up to you saying, ‘How can you dance when the universe is exploding?’” Pregnancy took place on her first sexual encounter with the result her parents made her give up the baby for adoption.  Mother and daughter, Brandi Ann Brown, eventually reunited. To escape, Roseanne hitchhiked solo across the country despite suffering from hepatitis. Without funds, she stayed in a cabin, and a cave. She landed in Denver where she married Bill Pentland because his trailer had a bathtub. She had three more children who she raised as “Jewish anarchists.” Roseanne recalled that 100 pounds ago she underwent an epiphany while scouring her bathtub. Her realization was she needed a life. When she confronted Bill regarding her unhappiness, he asked if she were ovulating.

Roseanne Barr became Roseanne Arnold after her marriage to second husband Tom, the Sid to her Nancy. She had promised she would take his name if he converted to Judaism. During a television interview, Tom remarked, “We’re America’s worst nightmare-white trash with money.” (Roseanne earned a million dollars per episode). Seemingly soulmates, the Arnolds mooned fans at a baseball game, had each other’s names tattooed on their posteriors, and wrestled in mud for Vanity Fair. Four years later, they were embroiled in an acrimonious divorce. Arnold Schwarzenegger told Tom, “I played the role of the Terminator. I didn’t marry one.” In the vein of Patty Hearst, Roseanne married her bodyguard, Ben Thomas, with whom she had her fifth child, Buck. Thrice divorced, Roseanne lives on a macadamia nut farm on the Big Island of Hawaii. She used the name for her 2011 reality show, Roseanne’s Nuts.

In 1990, Roseanne struck out in the San Diego Padre game when she screeched her way into infamy when she performed her rendition of the National Anthem, followed by grabbing her crotch. Whitney Houston she was not. The 30,000 strong crowd booed their disapproval; President George Bush declared her act “disgraceful.” Late night show host, Johnny Carson, observed that the anthem’s author, Francis Scott Key, “must be spinning like a lathe. The closest thing I had heard to Barr’s singing was when I got my cat neutered.” To the brouhaha, Roseanne gave the name of her youngest son-with the letter “F” replacing the letter “B.”

Roseanne lowered the “barre” with her reboot of her sitcom-nineteen years after a two-decade absence. However, ABC made her a denizen of cancel culture hours after Roseanne posted a racist tweet about Valerie Jarrett, an African American who had been an adviser to President Obama. The tweet: “If the muslim brotherhood & planet of the apes had a baby=vj.” The debacle had started with high promise: for its premiere 18 million viewers tuned in. Faced with the repercussion, Roseanne backtracked, and claimed her comment was a joke, admittedly in bad taste. She further explained that she had been Ambien tweeting and blamed the sleep aide for her remark. The backlash proved the equivalent of falling on her own sword.

The wild ride that is Roseanne Barr’s life is summed up in the title of her 2012 autobiography: Roseannearchy.