John Milton wrote in Paradise Lost, “They also serve who only stand and wait.” Ever since Penelope steadfastly wove on her loom waiting for Odysseus to return, the warrior’s wife has served in the typical role of the women who worry at home in shadow, waiting for their men to come back. But that has not always been the case. In contrast, a 20th century warrior wife accompanied her General, Douglas MacArthur, humanizing the man behind the five stars.

If ever there was a man born for the military it was MacArthur, son of a prominent Civil War General. He distinguished himself at West Point via eight engagements to different women his senior year. His offer of alimony was the bait to bedding a bevy of beauties; his method of ridding himself of romantic entanglements was his mother, nicknamed Pinky, who explained her son would never marry as he was wed to the Army. 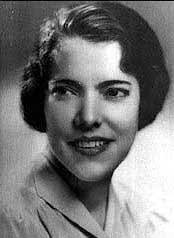 On February 14th, 1922, he finally tied the knot with fabulously wealthy socialite Henrietta Louise Cromwell Brooks, sister-in-law of tobacco heiress Doris Duke. William Manchester, in American Caesar, described her as on the prowl for Gatsby’s “gold-hatted, high-bouncing lover.” She thought she had found him in the gold-embroidered hatted MacArthur. Cracks soon appeared: she told her brother that while Douglas may have held a high rank in the Army, “he’s a buck private in the boudoir.” A further fissure was MacArthur’s transfer to the Philippines; she hated its steaming heat and lifestyle. Post divorce she married British actor Lionel Atwill, which led her to quip, “It looks like I traded four stars for one.”

Generals and their mistresses are a tale as old as time-Mark Anthony had Cleopatra and Douglas Macarthur had Isabel Rosario Cooper, a teenaged Eurasian actress nicknamed ‘Dimples-’ (though none were visible). When he returned to Washington, Isabel was ensconced in a love nest near Douglas’s office adjoining the White House. He bought her many lacy tea gowns, but no raincoat; his gifts made it manifestly clear her role was an indoor accessory only. After a Washington Post gossip columnist uncovered the clandestine affair, rather than falling on his sword-a la Anthony- Isabel was given a $15,000 pay-off via aide Dwight D. Eisenhower. The cast-off mistress used the money to open a hair-dressing salon in the Mid-West; she ended her days through suicide.

Douglas, twice having met his romantic Waterloo, felt consigned to a life where his only significant other was the Army.  In later years, a news correspondent asked about the General’s nonpareil military success; after puffing on his corncob pipe, the great man responded, “I believe it was destiny.” But romantic destiny wasn’t going to take that for an answer.

Jean Marie Faircloth was born in Nashville, Tennessee, on December 28th, 1898, in a white pillared home that could have served as a stage design for Gone With the Wind. At age eight, her wealthy parents divorced and her mother took daughter and sons to her native Murfreesboro. The head of the new household was her Grandfather, Captain Richard Beard, who raised the children to view the Confederate uniform as a badge of honor. Little Jean became known as “the flag-wavingest girl” in town and her Piped Piper was the sound of a bugle. A member of the conservative group, Daughters of the American Revolution recalled, “Every time Jean Faircloth heard a 4th of July firecracker go off, she jumped to attention and saluted.” Young men were advised if they wanted to win the heart of the diminutive, raven-haired beauty they had better don a uniform. When her father died he left her a substantial fortune and she took trips around the world.

Jean was aboard the S. S. President Hoover on the way to Shanghai when she met Douglas who was en route to Manila to become military advisor to the Philippines. They were introduced by Pinky who felt a kinship to the genteel Southern woman and considered the fact she was eighteen years younger than her son no impediment. Jean and Douglas had dinner together and the next day the smitten suitor sent flowers. Later Jean recalled of their shipboard romance, “And that was that.” She disembarked in Manila and remained for the next year and half, whenever possible, by the side of her man in uniform.

They were married in a quiet ceremony in the chapel of the Municipal Building in New York on April 30th, 1937. Reporters who gathered at the news of their nuptials were told by the fifty-six-year old MacArthur, in reference to his marriage, “This job is going to last a long time.”

The bride was not to return to the United States for fourteen years; however, this did not bother her as Jean felt home was her husband. The MacArthur’s lived in a penthouse in the luxurious Manila Hotel with a distant view of the island fortress of Corregidor. In the presence of others Jean addressed her spouse as “General;” in private she called him “Sir Boss.” In turn he referred to her as Ma’am or as “my finest soldier.”  Their family was completed with the birth of their only child, Arthur MacArthur IV. Jean and Douglas didn’t care about the  redundancy; they’d christened him after his grandfather  whose legacy  came above any future embarrassment such a repetitive name might bring their child. His adoring parents saw each of his waves as a salute and never doubted he would become a third generation general. When the baby was four days old, Jean hired a Cantonese nanny, Ah Cheu, who could look after her son which enabled Jean to look after his father. MacArthur later wrote in his memoir, “With my little family, I would be lonely no more.”

The catalyst which altered the trajectory of the couple’s fate was the bombing of Pearl Harbor. When the Japanese posed for an attack on the Philippines, American families fled to the States, but Jean was adamant to stand-or fall-with her man. They evacuated to an underground command center on Corregidor and as bombs shook its walls Jean still refused to leave or send three-year-old Arthur from harm’s way. For comfort the child clutched his stuffed rabbit he had named ‘Old Friend.’ She said, “We have drunk from the same cup. We three shall stay together.” It was only when three months later, upon President Roosevelt’s orders that MacArthur leave for Australia, (he could not let his most famous general fall to the enemy,) to take over the American forces there, the family fled on a torpedo boat. Before he stepped off the dock, the General made a promise to the Filipino people: “I shall return.”

For nights the commander in chief of the United States Armed Forces and his family sailed on the Pacific, prize targets of Imperial Japan. But they escaped down under to freedom. After settling in a Melbourne Hotel, to commemorate his wife’s devotion, Douglas presented Jean with a platinum-and-diamond wrist-watch inscribed, “To my bravest. Bataan-Corregidor March 1942 MacArthur.” When military matters kept them apart, he still found time for letters which he always began with the salutation “Dearest Jeannie” and signed, “Sir Boss.”

Just as the bombing of Pearl Harbor led to the MacArthur’s departure from the Philippines a second bomb occasioned another move toward the end of World War II. After the devastation of Hiroshima and Nagasaki from the atom bombs, President Truman appointed MacArthur as the Supreme Commander of the Allied Powers, with the approval of Britain’s Attlee, Russia’s Stalin and China’s Chiang Kai-shek, to provide stability to the occupied country. The family arrived in Tokyo and moved into their new home, in disrepair after the atom bomb, which had been the American Embassy prior to the War. The General accepted the formal surrender of Emperor Hirohito in Tokyo Bay aboard the U.S.S. Missouri.

The end of the ‘Emperor’ General’s reign came when Truman relieved him of his fifty-one years of service due to insubordination in the Korean War. The General’s encroachment on the Chinese border triggered the entry of Mao’s Communist Chinese, a major miscalculation. Upon reading of his dismissal, a grim-faced Douglas turned to his wife, “Jeannie, we’re going home at last.”  For thirteen-year old Arthur, home was a place where he had never set foot. The family was deeply moved when a quarter of a million Japanese lined the route to the airport where the army played Auld Lang Syne. In the same vein only the Second Coming would have upstaged the MacArthur arrival in America: they were greeted with a tickertape parade with an estimated ten million citizens lining the family’s motorcade.

The mythical military hero was invited to deliver a radio-covered speech to Congress which was anticipated as eagerly as the Sermon on the Mountain. While a teary-eyed Jean listened from her reserved seat in the front row of the visitor’s gallery, he gave an emotional farewell address which concluded, “Old soldiers never die-they just fade away. I’m an old soldier who tried to do his duty as God gave him the light to see that duty. Good-bye.”

Douglas, Jean and Arthur MacArthur moved into their final residence, the 32nd floor of Manhattan’s elite Waldorf Astoria. There the great man devoted his time to writing about his great life. He wrote of his marriage to Jean, “It was perhaps the smartest thing I have ever done. She has been my constant friend, sweetheart, and devoted supporter ever since. How she has managed to put up with my eccentricities all these years is quite beyond my comprehension.”

With MacArthur’s passing in 1964, millions mourned, but none so deeply as his widow. Ironically, it was his father’s death which allowed Arthur to escape the MacArthur shadow under which, unlike his mother, he was not content to remain. Unlike his illustrious forbears, he by-passed West Point for Columbia, and devoted himself to music rather than the military. He changed his name and virtually disappeared from public view. Posterity would have no Arthur MacArthur the Fifth.

Jean remained a public figure, believing this was in keeping with the role of the General’s wife.  At age ninety-one, with her friend Barbara Bush at her side, President Ronald Reagan presented her with the Medal of Freedom and the government of the Philippines honored her with its Legion of Merit. She was one of the few private citizens to receive a visit from the Emperor and Empress of Japan during their American visit.

The diminutive Jean was feted by high society, (one of her admirers was Prince Albert of Monaco,) and publisher Malcolm Forbes threw her a ninetieth birthday party attended by Frank Sinatra, Barbara Walters and other luminaries. In response to their praises she responded with her self-effacing response, “People are so good to me.”

Jean remained a symbol of white-gloved propriety though she never lost her adventurous spirit.  Columnist Liz Smith recounted when she attended Malcolm Forbes hot-air balloon expedition in France Mrs. MacArthur was a member of the party which included guests Walter Cronkite and the King of Romania. The ninety-one year old Jean gamely let Forbes help her into the balloon, which led the journalist to remark, “There won’t be any more grand old ladies like her.”  After a life as the helpmeet of MacArthur, it would take a lot more to intimidate the General’s lady.

MacArthur ultimately kept his promise to the Filipino people to return; he did and he freed them from Japanese control toward the end of WWII. However, his famous farewell quotation proved false in one aspect. For the American public- and for his widow-the memory of the old general would never fade away.