“It’s a Man’s Man’s Man’s World” is a song James Brown recorded in a New York studio in 1966, and, given the era in which he wrote, his words rang true. A map of Manhattan illustrates that men shaped the city and left behind their names as their calling cards.

Juliet, on her Verona balcony, asked, “What’s in a name?” and answered her own question by saying it made no difference, “A rose by any other name would smell as sweet.” However, in a historical context, lexicon does matter as it serves as a litmus test of those who wielded the power, those who posterity deemed as the movers and the shakers. The early settlers christened New York after King Charles II’s brother, the Duke of York, when the British commandeered the region from the Dutch. Major city landmarks are the Woolworth Building, after the business magnate, Columbia University, after the explorer, Rockefeller Center, after the industrialist.

Legend has it that the Welsh poet Dylan Thomas’ ghost yet lingers over the White Horse Tavern in Greenwich Village where he died after consuming eighteen whiskeys. Other ghosts permeate the Big Apple. The testosterone infused wraiths hover over buildings, parks, and monuments. No lady is memorialized on a bridge or a bank, thereby making the cosmopolitan capital a man-scape.

To help rectify the historical wrong, in 2016, Rebecca Solnit and Joshua Schapiro created a reimagined map, “City of Women,” that pays homage to some of the leading ladies of “Man-hattan,” where their names appear next to subway stops in the neighborhoods where they left their indelible fingerprints. Some of their landmarks on the atlas are three Supreme Court Justices, Shirley Chisholm, the Guerilla Girls. 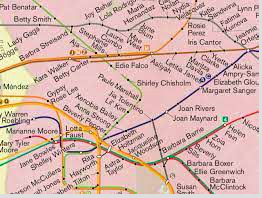 New York City, although it bears the stamp of the males who were its architects under the surface, has always been a tapestry embroidered by female fingers. Thus, the subway is an apt metaphor for the reimagined map as many women continue to labor underground, yet they still manage to get around.

However, in the modern clime where the gender playing field is more and more levelled-in sports, in politics, in business, the ghosts may one day emerge from the nether regions. And, when that scenario materializes, the James Brown song will no longer serve as America’s anthem. His lyrics will be replaced by those of John Lennon: “Imagine.”

– To discover the lives of other women who history has regulated to footnotes-Mrs. Karl Marx, Mrs. Mohandas Gandhi, Mrs. Oscar Wilde, among others-check out my book Behind Every Great Man: The Forgotten Women Behind the World’s Famous and Infamous.