The other day I pulled into the drive-through at Starbucks to order my venti latte non-fat milk extra foam, extra hot latte. I was taken aback when, rather than ask for payment, the barista informed me that the person in front of me had paid for my drink. I beamed behind my mask; in the time of the pandemic, kindness still visited. I proceeded to “pay it forward.”  The vignette turned my thoughts to the woman who, more than anyone, had dedicated her life adhering to the biblical injunction, “It is more blessed to give than to receive.”

Gonxha (Rosebud) Agnes Bojaxhiu was born in 1910 in Albania, present day Yugoslavia, to devout Roman Catholic parents. While most preteens dream of clothes, parties, and boys, Gonxha knew there could only be one man in her life: Jesus. At age eighteen, she joined a religious order and adopted the name Sister Mary Teresa of the Child Jesus. Later that year, she journeyed to her promised land of Calcutta. While riding on a train in 1946, she received her “call within a call,” a message from God telling her that her destiny lay in serving the poorest of the poor. To blend in with the downtrodden, she adopted the garment of the women who swept the streets: a white cotton sari with three blue stripes, her only adornment a small cross. She and fellow Sisters, armed with little more than faith, rescued newborn babies abandoned in garbage cans and provided succor to the lepers who lay dying in the streets. 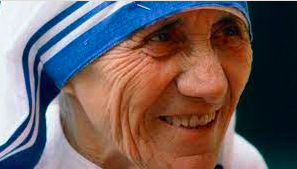 In order to solicit funds, Mother Teresa took whatever measures were necessary. On one occasion, after having bought $500 worth of groceries, she refused to move from the checkout line until someone footed the bill. Another time, after a visit, Pope Paul VI gifted Mother Teresa the white Lincoln Continental whose air conditioning had saved him from the sweltering heat of Calcutta. Rather than keep the car, she raffled it off with the words, “Just think of how many orphans I can feed.” People took to referring to her as The Saint of the Gutter.

News of the diminutive woman who did great acts resulted in her nomination for the Nobel Peace Prize in 1979 when she was sixty-nine years old. When informed of the great honor, the international press descended on her mission. Self-effacing when it came to personal glory, Mother Teresa told her Sisters, “I am going to hide somewhere.” In Stockholm, the nun with her austere habit stood in marked contrast to the world’s most elite women adorned with costly jewels. In her typical fashion, she used the $190,000 Award for the needy. She explained, “Just think of how many orphans I can feed.”

A half century of tireless devotion gnarled her hands, creased her face, bent her back, (she was only four feet ten inches tall,) and her late in life appearance became the photographic icon that held a mirror to the conscience of the world. Death held no terror for the nun who had lived alongside it for most of her life. The woman who had undergone the name changes from Gonxha Agnes Bolaxhiu to Sister Mary Teresa, to Mother Teresa became Saint Teresa with her 2016 canonization. No doubt she would have remarked upon the news of her beautification with the same words she had uttered when the Nobel Committee had informed her of her nomination, “I am unworthy.”

– Adapted from a chapter on Mother Teresa in my book Great Second Acts: In Praise of Older Women