Jim Morrison of The Doors remarked, “Whoever controls the media controls the mind.” The Greek baroness of the media became a household name when her website made her a contemporary Colossus of Rhodes.

Athens born Arianna’s father was Constantine Stassinopoulos who had been incarcerated in a Nazi concentration camp for publishing an underground newspaper. Despite Constantine’s name, with its association of constancy, his eyes wandered to women other than Elli, his wife. In 1969, at age nineteen, Arianna traded the shores of the Aegean for the halls of British academia when she enrolled in Cambridge; she lived in one room, alienated from her classmates who were uncomfortable with the six foot girl-not from their country or class.

Love lessened Arianna’s loneliness when she fell for Bernard Levin, the lionized columnist for the London Times. He was twice her age and half her size and not of her faith-he was Jewish-but Arianna was gaga for him. The fly in the romantic ointment was Levin was committed to bachelorhood, and Arianna longed for commitment.  After a decade, Arianna broke off their relationship and headed for America to put distance between herself and her lost love.

Arianna ingratiated herself into a moneyed rarified circle and became the toast of the Big Apple where she socialized with Barbara Walters, Henry Kissinger, and Dan Rather. Trophy escorts at black tie events were on the arm of California govenor Jerry Brown where she left behind the scent of her signature perfume, Cartier’s La Baiser Du Dragon-The Kiss of the Dragon. A detractor of the newly minted woman of the hour described her as “the most upwardly mobile Greek since Icarus;” another referred to as “the Sir Edmund Hillary of social climbers.” In 1984, Arianna left for Los Angeles to promote her book on Picasso who she portrayed as a mountain of misogyny. 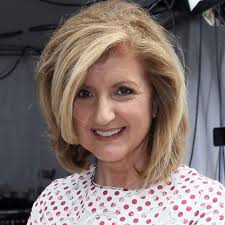 At age thirty-five, desperate to clasp the brass ring of marriage, heiress Ann Getty introduced Arianna to Michael Huffington, the Texas oil tycoon. They married six months later where the bride wore mammoth diamond earrings borrowed from Princess Michael of Kent; her bridesmaid was Barbara Walters. The power couple moved to Washington where Michael pursued a political career masterminded by his wife who a journalist referred to as a “right-wing lady Macbeth.” The girl from the country who gave birth to drama had more than her fair share: after the birth of their two daughters, Michael dropped the tidbit that he had engaged in adulterous affairs-with men. After their divorce, Arianna claimed she had been unaware of hubby’s homosexual inclinations, but many believed she had been blinded by bling. A friend of hers remarked, “Honey, when they fixed me up with Michael in Houston I knew he was gay at shrimp cocktails, and Arianna’s smarter than I am.”

After transitioning to the political left, Arianna lost out on a bid for California govenor to Arnold Schwarzenegger. Ever versatile, Arianna launched the Huffington Post where bloggers were celebrity pals such as Norman Mailer, Larry David, and Nora Ephron. Initially, the online news site attracted barbs aimed at its founder such as one that described Arianna as “an intellectual lap dancer.” Nevertheless, it found favor with AOL who purchased the Huffington Post in 2011 for $315 million.

Regardless of one’s perspective on LaHuff, opponents take heed: as with the big bad wolf if angered, Arianna can “Huff and puff…..”