A rite of passage for new parents is to take a photograph of their newborn thereby forever freezing that magic moment. The framed picture elicits nostalgia as the sands of the hourglass slip away. However, in a nod to irony, a baby picture, if the truth behind it had been discovered, would have proved a death sentence.

In 1928, newlyweds Jacob and Pauline Levinsons left their native Latvia for Berlin to pursue careers in classical music. Jacob was a talented baritone; Pauline had studied at the renowned Riga Conservatory. An opera house offered Jacob a position, and as a precaution against the city’s virulent anti-Semitism, he adopted the name Yasha Lenssen. After the truth came to light, his contract ended, and he found work as a door-to-door salesman.

In 1935, the Levinsons were living in a cramped, one-bedroom apartment where the household grew to include their daughter, Hessy. When the baby was six months old, Pauline took her to Hans Ballin, a well-known photographer. Her parents were thrilled with his work and placed it in on the piano Jacob had given his wife as a present to celebrate their daughter’s birth. 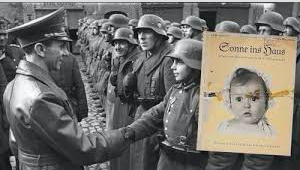 Shortly afterwards, Frau Klauke, their cleaning lady, told the couple that Hessy’s photograph was on the cover of the magazine Sonne ins Hause (Sunshine in the House). Pauline assured her that she was mistaken, that all babies looked similar. Insistent, the woman purchased the magazine; Jacob and Pauline were gobsmacked. The cover displayed the same photograph that resided on their piano. To add to their shock, the periodical, which originated in Leipzig in central Germany, glorified The Third Reich. In horror, they turned the pages and images of men wearing swastikas stared back. Another held the image of Adolph Hitler reviewing his troops. The front page explained that the editor was an associate of top ranking official Hermann Goering. Husband and wife stared at one another aghast: how did a Jewish baby end up in an Aryan propaganda publication?

Desperate to get to the bottom of the mystery, Pauline contacted the photographer. He explained that he, along with ten other studios, had been approached by the Nazi party to each submit their ten best pictures for a contest to find the best example of an Aryan baby. In normal circumstances, Pauline would have been thrilled to learn her daughter had merited the winning entry, but the times were anything but normal. When Pauline asked why he had submitted a Jewish baby as an Aryan ideal, he replied that he enjoyed the irony that the Nazis had idealized a member of the race they felt to be inferior and would later try to annihilate. Ballin added that the Reich Ministry of Public Enlightenment and Propaganda, headed by Joseph Goebbels, had made the final choice.

The joke held no humor for the Levinsons. They understood that if the Nazis learned the truth, one that had pulled the wool over their eyes and made a mockery of their ideology, would equate to a death sentence. As a result, they could no longer take Hessy outdoors. An aunt in Memel, Lithuania, went to buy her niece a birthday card for her first birthday and was amazed when Hessy’s image stared back. She purchased the magazine and sent it to her family as a warning.

In 1938, the Gestapo arrested Joseph on a trumped up tax charge but released him when his accountant, a Nazi party member, came to his defense. Desperate to escape the country, they had once believed held great promise, they returned to Lithuania before settling in Paris. On one occasion, Hessy developed an earache and a Jewish doctor payed a house- call. Pauline confided the story of the photograph, and the physician said he had connections at the Paris Soir,and that the newspaper would welcome the occasion to make the Nazis appear ridiculous. Joseph vetoed the idea; his daughter on one publication had proved more than enough.

When the swastika flew from the Eiffel Tower, they were on the move once more, and they embarked on a desperate odyssey that took them through Spain, Portugal, before they boarded a ship to Cuba. The life-saving visa had been obtained after Jacob had bribed a member of the French Consulate. Under the dictatorship of Fidel Castro, Jacob’s business floundered and fearful life would be as horrendous under the sickle and hammer as it had been under the swastika, the Levinsons immigrated to the United States in 1950.

Possessed of a scientific bent, Hessy studied chemistry at Barnard College and Columbia University that led to her becoming a chemistry professor at St. John’s University in New York City, a post she held until age 81. In 1959, she married Earl Taft, a math professor at Rutgers University, with whom she shares two children and four grandchildren.

In 2014, Professor Taft finally went public with her stranger than fiction story. She and Earl visited the Yad Vashem Holocaust Museum in Israel in conjunction with the organization’s “Gathering the Fragments” campaign where she donated the Nazi magazine cover and shared its origin. When confronted with their question as to what she would say to Hans Billin if she had met with him, she replied that she would applaud him for his courage. She concluded her interview, “I feel a sense of revenge. Good revenge.”