Visitors to the Smithsonian Institution Building, known as “The Castle,” might notice a crypt that holds the remains of its founder. James was born in 1765, to Elizabeth Hungerford Keate Macie, allegedly a descendant of King Henry VII. A widow, after discovering an affair had left her pregnant, departed for Paris to diffuse the scandal. The baby’s father was Hugh Smithson, the first Earl of Northumberland, who held the ancient name of Percy. Due to his illegitimacy, James was not entitled to his father’s surname, vast estates, and social prestige. He groused, “The best blood of England flows in my veins but this avails me not.”

With his mother’s financial backing, James studied at Oxford and travelled extensively throughout Europe. He visited Paris at the start of the French Revolution and ended up a prisoner during the Napoleonic Wars. Upon Elizabeth’s passing, James inherited a sizable fortune; he also changed his surname from Macie to Smithson.

Science was the constant of James’ life, and the Royal Society of London inducted him as a member. Since James never married or had children, he left his fortune, in today’s currency, $15,000,000, to his nephew, Henry James Hungerford. An addendum to his will stated that if Henry died without heirs that the inheritance should be earmarked to “the United States of America, to found at Washington, under the name of the Smithsonian Institution, an Establishment for the increase and diffusion of knowledge.” The motive behind the behest remains an enigma: perhaps James admired America’s freedom from England’s rigid class hierarchy; perhaps he admired its Enlightenment ideal of democracy. James died in 1829 while living in Genoa, Italy; Henry, in his twenties, died of unknown causes in Pisa, Italy. 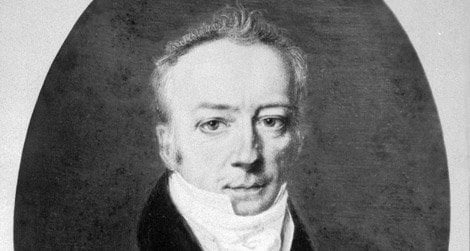 The executors of the estate notified the United States government of the windfall, and the government had to determine how to carry out the spirit of James’ vision. After eight years of debate on the best way to diffuse knowledge, President James K. Polk signed an Act of Congress that established the Smithsonian Institution.

In 1904, the English cemetery in Italy that held the grave of James Smithson planned to demolish the site. Acting without the permission of his fellow Smithsonian regents, the inventor of the telephone, Alexander Graham Bell, arranged for James’ remains to be transferred to the Castle for reinternment. In 1973, workers opened James’ coffin and discovered a sealed metal container. They used torches to open the box and accidentally set its silk lining on fire. The bones were unharmed, and an anthropologist determined they had belonged to a short man who smoked a pipe.

The Smithsonian is testimony to James’ vow, “MY name shall live in the memory of man when the titles of Northumberland and the Percys are extinct and forgotten.”