The name Little Orphan Annie conjures an image of a spunky, curly haired child with a voice that can melt even a wintery heart. In a twist on a traditional fairy tale, her knight is a billionaire aptly named Warbucks-a nod to how he made his billions?-who whisks her away to his Fifth Avenue mansion for a life of happily ever after. In contrast, the real Annie’s life did not follow the script of the Disney movie.

Mary Alice, nicknamed Allie, Smith was born on a farm in Liberty, Indiana, in 1850, the youngest of ten children. After the passing of her parents, her grandmother, who lived in a log cabin in nearby Reedville, took her in. Too infirm and poor to look after a youngster, her uncle, John Rittenhouse, assumed guardianship. However, as John had his own large family to support, he “bound her out to earn her board and keep.” A hard-knock life indeed.

Reuben Riley brought the eleven-year-old Allie to his home in Greenfield to help his wife, Elizabeth, with their four children while he left his law practice to join the Union in the Civil War. Although she was always busy with chores, that led to her nickname “Our Lady of the Broom,” and she had a small room in the attic. She remarked, “I’m mighty glad I’m come to live in this here house.” Allie was especially entranced with the burnished wooden stairs, and imaginatively christened each one with names such as Clarabelle, Annabelle, Florabell. She explained that she played on them “like I was climbin’ up to the Good World where my mother is.”  In the evenings, in front of the fireplace, Allie entertained the Riley children with tales of goblins who spirited away naughty children. One of the sons, James (Bud) Whitcomb, developed a bond with Allie who told him that one day he would be a great poet. Her words proved prescient, never imagining she would serve as his muse.

After a year, Allie left the Riley home and worked in a tavern for the next six years. At age eighteen, Allie married John Wesley Gray, a farmer from Philadelphia, and the couple raised their seven children in their log cabin.

John never forgot Allie with her “bright and infectious humor,” and in Hoosier dialect, wrote: “Little Orphant Allie.” However, the publisher released the verse with a typographical error as “Little Orphan Annie.” At age sixty-five, Allie discovered she was the inspiration for the famous poem when a relative of the Grays chanced upon a Riley prose piece called, “Where is Mary Alice Smith?” In vain, John had advertised in newspapers all over the Midwest and passed away in Florida without a reunion with his lost friend. 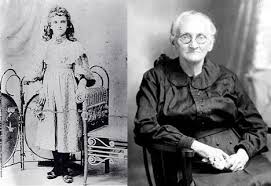 At age seventy-four, the Gray family interred Allie in the Philadelphia Church Cemetery. Little did Allie imagine in her wildest tales that she would become the namesake of a doll, Raggedy Ann, a Sunday comic strip, Broadway and Hollywood productions. While the celluloid Annie’s ode to optimism was the song, “The Sun Will Come Out Tomorrow,” the Indiana Allie’s supernatural stories, immortalized in the last stance of a Riley verse, remains her elegy, “An’ the Gobble-uns’ at gits you Ef you Don’t Watch Out!”