Arguably, the world’s most famous footage is the Zapruder film that captured President John F. Kennedy’s final moments. Although millions are familiar with Abraham Zapruder’s movie, lost in the annals of the assassination is the man behind the camera.

Abraham was born in Kovel, in Tsarist Russia, present-day Ukraine in 1905. His early years were marked with misery due to virulent anti-Semitism. During the Bolshevik Revolution, his father, Israel, emigrated to the United States, and his family joined him in 1920. With only four years of education, unable to speak English, Abraham found work in New York City’s garment district.  In 1933, he married Brooklyn-born Lillian, with whom he had children Henry and Myrna. The couple moved to Dallas where Abraham owned a clothing company, Jennifer Juniors, located in Dal-Tex Building, near Dealey Plaza. Zapruder was living the American Dream until he became caught up in an American nightmare.

On November 22, 1963, Abraham decided to use his lunchbreak to watch the presidential motorcade. The Dallas air hung heavy with anti-Democrat feeling; President Kennedy had told his wife, “we’re heading into nut country.” Believing that the crowd would be too dense to obtain footage, Zapruder had left his 8mm Bell & Howell at home. His secretary, Lillian Rogers, told him, “Mr. Z, how many times will you have a crack at color movies of the president?” He made the ten-minute trip home, and along with his camera and his receptionist, Marilyn Sitzman, left for Dealey Plaza where they stood on a 4-foot concrete abutment on Elm Street that afforded an unobstructed view. The Dallas dressmaker was about to become the accidental chronicler of one of an earth-shattering twentieth century event. 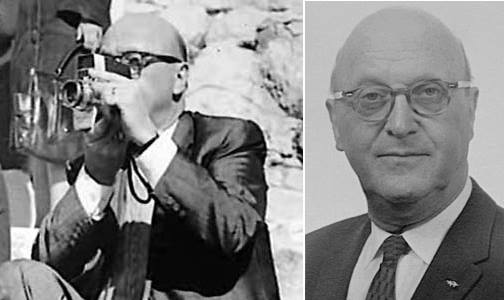 Zapruder, wearing a black fedora and bow tie, lifted his camera-that held footage of his grandchildren playing on a patio-and began filming his 26 second movie. In the fateful Frame 313, an assassin’s bullet resulted in the president clutching his throat. Pandemonium ensued that included a hysterical Zapruder. A difference was while the news spread that Kennedy was on his way to Parkland Memorial Hospital, the 58-year-old Abraham knew the president was dead. In his office he wept, something he did again when testifying at the Warren Commission.

Zapruder developed the film that afternoon, and the press inundated him with offers for the footage. Abraham sold it to Life magazine because its editors promised to treat the footage with discretion, and he liked Richard B. Stolley, its Los Angeles bureau chief who later founded People magazine.  Life paid Zapruder $150,000; worried that a Jewish man profiting from the assassination could set off a wave of anti-Semitism, Zapruder donated $25,000 to the widow of Dallas police officer, J.D. Tippit, who Oswald had murdered 45 minutes after the assassination. Zapruder died of cancer in 1970; however, the film lives on.

In 1975, Time Inc., tired of the hot potato artifact, sold it back to the Zapruder family for $1.00. Three years later, it secured a niche in the National Archives where it currently resides alongside Jacqueline’s pink Chanel suit that she wore in the fatal Dallas day, and Eva Braun’s home movies. In 1999, the federal government, that had appropriated the film, paid Zapruder’s heirs $16 million. The family donated the copyright to the Sixth Floor Museum of the Texas Book Store Depository.

Two weeks after the assassination, the former First Lady described her husband’s 1,000 days in office with a lyric JFK’s favorite musical, “Don’t let it be forgot, that for one brief, shiny moment there was Camelot.”