While the Italian Mona Lisa’s enigmatic smile has beguiled the ages, the American Mona Lisa’s formidable expression hints of a woman who held little patience for humor. The Victorian painting is entitled, Arrangement in Grey and Black, No. 1, though its colloquial name is Whistler’s Mother. The elderly lady’s prim clothes and staid pose hints at one who did not spend her years whistling Dixie. 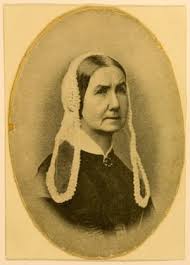 Tallulah Bankhead alluded to Mrs. Whistler’s modest appearance, “The less I behave like Whistler’s mother the night before, the more I look like her the morning after.” Anna Matilda McNeil, from Wilmington, North Carolina, was born in 1804, a daughter of the antebellum South, the niece of a slave-owner. She became the second wife of George Washington Whistler, a West Point graduate, and together they endured the loss of four children in the span of six years. Only James, who she called Jemie, and William survived to adulthood.  Her sister-in-law summed up Anna’s no-nonsense personality as “so unshakeable that sometimes I could shake her.” George was a brilliant engineer and Tsar Nicholas I hired him to design a rail line from St. Petersburg to Moscow. Recognizing James’ artistic talent, Anna enrolled him in the Imperial Academy of Fine Arts. In 1849, George died of cholera, and the family returned to America. Mourning the loss of her husband, Mrs. Whistler dressed in black for the rest of her life.

In 1864, as James worked as a Confederate surgeon, Anna joined James in London, a trip that involved evading a Union blockade off the Atlantic Coast. Equal measure rake and Mama’s boy, to ready his house for his mother, James performed a variation of spring cleaning that involved evicting his Irish mistress, Jo Hiffernan. Jo, rather than poke out his eye with his paintbrush, raised James’ son who he had fathered with a maid. James’ two daughters from another girlfriend, ended up in foster care. The devoutly Episcopalian Anna sighed at her son’s sins while remaining his most steadfast supporter. In filial love, Whistler used her maiden name as his middle one.

In 1871, after a fifteen-year-old girl failed to show up for her sitting, Whistler painted Anna instead. The mother-as-model described “standing as still as a statue,” but at age 67, soon had to pose in a seated position. After he had finished, James exclaimed, “Oh Mother it is mastered, it is beautiful!” Whistler, rather than thanking his mother praised his own artistry. Oscar Wilde had remarked of Whistler’s narcissism that he spelled art “with a capital ‘I.’”

The unassuming Anna would have been astounded had she known of her posthumous fame. When the Louvre acquired her painting, Mrs. Whistler shared residence with fellow painting, Mona Lisa. President Roosevelt, along with his mother, viewed her when she was on loan to the Museum of Modern Art. The experience led FDR to authorize her likeness for a Mother’s Day stamp. A civic group in Pennsylvania erected a monumental statue of Anna; on its base are words from Coleridge, “A mother is the holiest thing alive.”  President Valéry Giscard d’Estaing borrowed her portrait in order to hang it from his office so visiting American President Jimmy Carter could have a private viewing of his favorite work of art.

Whistler’s stylized monogram that he fashioned after an insect-one included on the drapery of his famous painting can serve as a metaphor for Anna: from the larva of the loss of four children and her husband, caught up in the Civil War, she endures as a black and white garbed butterfly.