If these walls could talk what a tale they would tell, and if a Viennese painting could do likewise, it would serve up a bouillabaisse of genocide, moguls, and love. The iridescent canvass, Lady in Gold, is a world-renowned icon, but through artifice, the identity of the raven-haired woman in the portrait vanished.

Every stolen painting holds a story, and the one behind Woman in Gold is one for the ages. Adele Bauer was born in Vienna in 1888 to banker, Moritz, and mother, Jeanette. At age nineteen, Adele married Ferdinand Bloch, a Czech-born sugar baron of staggering wealth, nineteen years her senior. When Adele’s sister married Ferdinand’s brother, in deference the Bloch brothers blended their surname to Bloch-Bauer.

After three still-births, Adele turned her attention to the arts; her mansion became a salon that attracted the intelligentsia, and musicians such as Richard Strauss. As a present for his in-laws’ anniversary, Ferdinand commissioned Gustav Klimt-Austria’s variation of Russia’s Rasputin- to paint his wife’s portrait. The cost was equivalent to a quarter of the price of a villa; the commission took three years. The eroticism of the painting led to the speculation that the artist, whose voracious talent equaled his sexual appetite, and the society hostess were lovers.

At age forty-three, Adele passed away from meningitis, a fact that spared her the calamity that overtook her country and family. In 1938, after the Anschluss, Ferdinand fled the country and passed away, alone and penniless, in Zurich in 1946. The Nazis plundered his possessions; Adele’s wedding present of a diamond necklace became the possession of Emma Goering; Vienna’s Belvedere Gallery lay siege to Klimt’s masterpiece. To hide its Jewish provenance, Adele became Aryanized to The Woman In Gold. 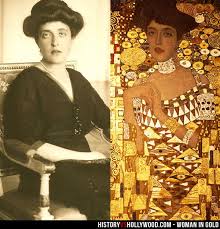 The injustice would have ended with the theft except for the tenacious efforts of the octogenarian Maria Altman, the Bloch-Bauer niece. Maria’s 1937 wedding to Fritz Altman, a Polish opera singer, was the last great Jewish social event before Kristallnacht. The Nazis imprisoned Fritz in Dachau, raped her sister, and executed her brother-in-law. The refugee couple survived the Holocaust and fled to London before they settled in Los Angeles. In the year 2000, Maria waged a six-year battle for restitution against Austria that refused to relinquish their Mona Lisa. However, Altman refused to take nein for an answer till a Supreme Court decision in 2006 wrested ownership to Maria Altman, who had first viewed the portrait in her aunt’s home. Wonderful as it was to reclaim a part of her doomed family, the insurance was so prohibitive she sold her birthright to Estee Lauder heir, Ronald Lauder, for $135 million, at the time making it the most expensive art sale in history. A stipulation was the painting had to be available to the public, and it became the crown jewel in Lauder’s Neue Galerie, (once the home of Gloria Vanderbilt,) in Manhattan. Oprah Winfrey purchased the Portrait of Adele Bloch-Bauer II (Adele was the only woman Klimt painted twice) and resold it in 2017 for $150 million to a Chinese buyer.

In a Robert Browning poem, an Italian Duke gazed upon the portrait of his late wife, who he had murdered as he believed he was not the only one she had looked upon with favor. In contrast, Ferdinand’s love had given his adored Adele immortality, and in the words of My Last Duchess, “There she stands/As if alive.”