Cats, The Lion King, Hamilton share a commonality other than being immortal musicals: they all won Broadway’s highest accolade: The Tony. But who was the namesake behind theater’s most coveted prize?

Antoinette was born in Denver in 1888, the only child of lawyer William Russell Perry and housewife, Minnie. From early childhood, Antoinette, like the Man of La Mancha, dreamed an impossible dream-to become an actress. Despite opposition from her father, in her early teens, the stage-struck Antoinette made her Manhattan debut. Antoinette gave up her career when she met her life’s leading man, Frank Wheatcroft Frueauff, the president of the Denver Gas and Electric Company. Her marriage put Antoinette in the upper range of the upper crust, and she owned homes in New York City, Newport, Rhode Island, and a castle in England. She had three daughters, one of whom died at birth.  Frank succumbed to a heart attack and left his wife with a broken heart-and a $13 million dollar estate, many millions more in contemporary currency. Antoinette continued with her lavish lifestyle; in the summer of 1923, she took her two daughters, their governess, the producer Brock Pemberton and his wife, Margaret, along with ten others, on a seven week grand tour of Europe.

While it would have been easy to have spent her days as a merry widow, Antoinette “tired of the life of social whirling dervish,” and she returned to her first love-the theater. Pemberton produced several plays in which Antoinette starred; her career ended after a 1947 stroke paralyzed one side of her face. Unwilling to exit from the world she loved, Antoinette and Brock became co-directors of a number of plays that shattered the glass ceiling of Broadway. Their relationship also became romantic, a fact Mrs. Pemberton did not appreciate, though her anger may have been mitigated by the European tour. Her greatest hit was Mary Chase’s 1944 Pulitzer-Prize comedy, Harvey, that won over Tennessee Williams’ The Glass Menagerie.

Despite her acting and directorial achievements, it was her efforts during the war that made her a star in the Broadway firmament. Perry co-founded the American Theater Wing that was dedicated to helping the war effort and operated the famous Stage Door Canteen in New York City. Hume Cronyn checked coats, Dorothy Lamour took drink orders, (non-alcoholic,) and Tallulah Bankhead cleaned tables, while Al Johnson and Marlene Dietrich performed.

Antoinette passed away from a heart attack at her Park Avenue home in 1946, a day after her fifty-eighth birthday. The American Theater Wing honored her memory by creating an annual award in her name: The Antoinette Perry Award for Excellence in Broadway Theater. In 1947, 1,200 guests attended a dinner at New York City’s Waldorf-Astoria Hotel Grand Ballroom, the venue for the first ceremony. One of the first honorees was Ingrid Bergman for Joan of Arc, and, along with other female winners, she received a Tiffany compact with an automatic windshield wiper on the mirror while male winners received gold money clips. 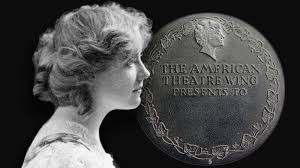 When he presented the Award, an emotional Pemberton referred to it as Toni, the nickname he used for the love of his life. However, as Toni Hair Permanent was a popular hair product, it became known as the Tony.

In 2020, for the first time in its history, because of the pandemic, the great white lights of Broadway are dimmed. However, the ceremony will be broadcast on television, for, in theater parlance, one Antoinette abided by, “The show must go on.”