The Stanford University seal is the image of a tall tree, the el palo alto, the famous redwood (literally, “tall stick”), the year 1891, and the name Leland Stanford Junior University. Along the inner circle is the German motto, Die Luft der Freiheit Weht, The Wind of Freedom Blows. However, the wind also held a tale of a robber baron, unspeakable grief, and murder.

The genesis of the prestigious university began with Jane Elizabeth Lathrop, born in Albany, New York, the third of six children. Jane travelled far afield from her middle-class background with her 1850 marriage to lawyer Leland Stanford. Leland joined his brothers in Sacramento, where they enriched their coffers by selling supplies to California Gold Rush miners. With his newfound wealth, Leland became the co-founder of the Central Pacific Railroad. He served as the governor of California during the Civil War and later became a senator. 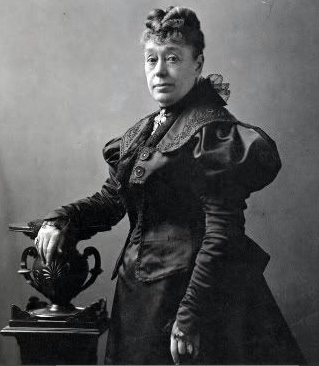 The highlight of the Stanford’s marriage occurred in 1868 when, after eighteen years of a childless marriage, the forty-four-year-old senator and his nearly forty-year-old wife, who he called Jenny, became the parents of their son, Leland. To celebrate, the couple arranged a dinner party; when the guests were seated, the waiter brought in a large silver platter with a cover that he placed at the center of the table. The governor announced there was someone he wished to introduce; he lifted the lid to display his baby lying on blossoms. The proud papa said, “My boy.”

Like other children of the scions of the Gilded Age, Leland’s life was spent in a glittering world of pampered privilege on the family horse farm, Palo Alto. At age fifteen, Leland accompanied his parents on a grand European tour. In Athens, Leland became ill with typhoid, and the Stanfords departed for treatment in Italy. In 1884, Leland passed away. His parents were prostrate with grief at their loss. The senator told his devasted wife, “The children of California shall be our children.”

The couple founded Leland Stanford, Jr. University to keep their son’s memory alive. They deeded their farm, Palo Alto, to house the university, and donated $40 million, ($1,138,000,000 in contemporary currency.) The school admitted its first students in 1891. On their university’s grounds, they erected a white mausoleum guarded by four stone sphinxes, the death masks of all three family members, and the objects that were important to their son.

In 1905, Jane had survived an attempt on her life at her Nob Hill mansion when someone put poison in her Poland mineral water. Terrified, Mrs. Stanford left for Hawaii to leave the attempted murder behind her. In Honolulu, where she was a guest at the Moana Hotel, Jane awoke in agonizing pain. Her last words were, “What a horrible death to die!” Police discovered a fatal dose of Strychnine in her glass of water. Although no formal charges were made, suspicion fell on Jane’s long-time maid, Bertha Berner, who had been present on both poisonings.

Stanford, perhaps in a bid to stave off a scandal, reported that their founder’s death had been caused by a heart attack. At Stanford, all activities were suspended for a week of mourning. Jane’s final resting place was in the mausoleum where she was laid to rest beside her husband and their beloved boy.