Ancient Greece gave us mythological creatures such as the centaur - man and horse, the satyr - man and goat, the Minotaur - man and bull. And twentieth century America gave birth to a new hybrid: Amazonian and Angel.

The genesis of a pink empire began when Roy Raymond, a thirty-year-old Stanford business graduate, went to a department store to buy his wife, Gaye, something to spice up their sex life. The lingerie looked like something a grandmother would wear, and the garish garments appeared even uglier under the harsh florescent lights. Even more disheartening, as he handled a pair of panties, the saleswomen looked at him as if his name were on a list of sex offenders.

Raymond left the mall empty-handed, but he walked away with a concept that would make unmentionables mentionable. His foray into the ladies’ section led to his realization that most men would rather be in a war zone than shop for female intimates. What, he pondered, would happen if there was a relaxed environment where men could browse for enticing underclothing without having to flash their wedding rings?

Roy had been an entrepreneur since age thirteen; in Fairfield, Connecticut, he had started a business that printed wedding invitations and leaflets, hiring and firing the neighborhood kids. Gaye was on board with his business venture, and with a start-up of $80,000 borrowed from relatives and the bank, Roy was ready to transform his hunch into a reality.

The first store opened in Palo Alto; currently famous for breeding 27-year-old billionaires, but then it was just a sleepy California suburb.  The décor resembled a nineteenth century British boudoir furnished with red velvet covered chairs, brass fixtures, and silk drapes. The merchandise embodied what Dorothy Parker had once described as, “Brevity is the soul of lingerie.”

After Raymond had the concept, the store, and the merchandise, he was left with the christening. He decided to name his brain child after 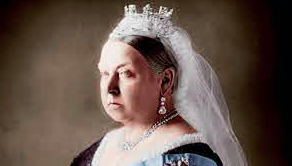 Queen Victoria. The royal’s advice to her daughters, “Lie back and think of England,” advice she apparently practiced as she had nine children. Although Victoria appeared the ultimate killjoy in official portraits, her diary revealed she was far from a prude. In one entry she wrote, “How handsome Albert looks in his white cashmere breeches with nothing on underneath.”

Victoria’s Secret grew to five stores with sales of $500,000 its first year. Nevertheless, a few years later it was teetering on bankruptcy. In 1982, Leslie Wexner, the owner of The Limited chain of clothing stores, purchased the company for a $1,000,000. Under Wexler’s leadership, the chain grew to 545 stores and generated billions of dollars. In a brilliant marketing move, Wexner instituted the Victoria’s Secret Fashion show where millions of television viewers watched leggy lovelies strutting down the catwalk wearing angel wings and million dollar bras. Ironically, as Victoria’s Secret’s success grew, Roy did not fare as well.

In 1993, Roy Raymond stood on the Golden Gate Bridge in view of the city where he had gained success through miniscule lingerie with a hefty price tag and plunged to his death. In his car was a letter that included an apology to his fifteen-year-old son, Scott, and his eleven-year-old daughter, Laura. What was missing from his suicide note was the reason behind his desperate act, one that remains Raymond’s secret.