In the 1939 classic, The Wizard of Oz, an orphaned girl wistfully sings of a magical world, one far afield from her sepia-colored Kansas farm. Metro-Goldwyn-Mayer based the film on the novel by L. Frank Baum, the wizard behind America’s first fairy-tale. Tragically, the non-literary Dorothy never experienced the land over the rainbow.

In the book, The Wonderful Wizard of Oz, Dorothy tells the Scarecrow, “There’s no place like home.” What made home so wonderful for Frank, (he went by his middle name as he disliked his first, Lyman,) was his wife, Maud Gage Baum. Frank met Maud in 1882 when she was a student at Cornell; his aunt introduced them with the words, “I’m sure you will love her.” Baum replied, “Consider yourself loved, Miss Gage.” His future wife responded, “Thank you, Mr. Baum. That’s a promise. Please see that you live up to it.” Maud’s mother, Matilda Joslyn Gage, a suffragette, Native American activist, and abolitionist was far from enthusiastic that her daughter was abandoning university in favor of marriage.

The Baums had four sons to whom Frank told the tale of a boy carried away by a cyclone to a country over the rainbow. When one of his boys asked the name of this magical land, Frank, glancing at his filing cabinet that bore the label O-Z, announced it was called Oz. Maud encouraged him to turn his ideas into a book to delight other children.

In 1898, Maud’s brother, Thomas Clark Gage and his wife, Sophie Jewel, had a baby, Dorothy Louise. Maud often travelled from Chicago to Bloomington, Illinois, to visit her adored niece who she looked upon as her surrogate daughter. Tragedy struck when Dorothy passed away at age five months from what her doctors diagnosed as “congestion of the brain,” in today’s parlance, meningitis. The family’s grief may have been the impetus behind the Wizard’s words to the Tinman, “I think you are wrong to want a heart. It makes most people unhappy. If you only knew it, you are in luck not to have a heart.” The funeral was held at Bloomington’s Evergreen Memorial Cemetery; after the internment, Maud was so devastated she required medical attention. At the time, Frank was completing his manuscript, and in tribute to the lost child, he changed the gender of his protagonist and named her Dorothy. Frank’s novel bore the dedication: This book is dedicated to my good friend & comrade. My Wife. L.F.B. Baum also called other characters after his family: his mother-in-law Matilda became Aunt Em; his father- in- law Henry became Uncle Henry.

In 1997, historian Sally Roesch Wagner, while researching the biography of Matilda Joslyn Gage, learned about the location of Dorothy’s gravesite. Mickey Carroll, an actor who had played the role of a munchkin, and whose family owned a tombstone business, donated a black, granite headstone as the epitaph had been obscured, and placed it at the foot of the grave, leaving the original in place. The cemetery named 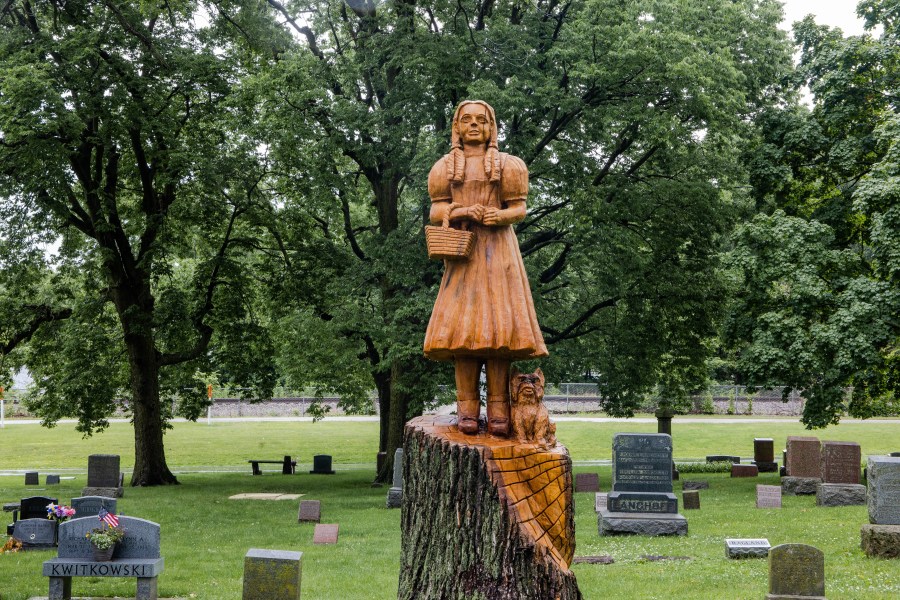 the children’s section The Dorothy L. Gage Memorial garden in her honor. An organization, Beyond the Rainbow, made arrangements with a local florist to deliver fresh flowers to Dorothy’s gravesite on the anniversary of her birth, death, and Christmas. In 2008, near the gravesite, sculptor Bill Baker used a 200-year-old oak tree to carve a statue of the cinematic Dorothy with Toto at her feet, standing on a brick road.

Because of Frank L. Baum, Dorothy has been immortalized as a girl in a blue gingham dress and red ruby slippers guarded by a tree, a wooden incarnation of the Good Witch, Glinda.