When people think of the state of Virginia, they might associate it with the legendary Pocahontas, its slogan, “Virginia is for lovers,” or its state motto, “Sic semper tyrannis.” But why did a British explorer name Virginia after a British queen who never set foot in the New World?

A story-probably apocryphal-relates how Sir Walter Raleigh placed his cloak over a muddy path so Queen Elizabeth I would not muddy her shoes. However, what is factual is Elizabeth gave her own “dear minion” a charter to take possession of unknown lands in America. In tribute, Raleigh christened the territory after Her Majesty’s moniker, “The Virgin Queen.”

Elizabeth Tudor’s family was dysfunctional: at age three, her father, King Henry VIII-a red-haired, rotund, rotter-ordered her mother, Anne Boleyn, beheaded on a trumped-up charge of adultery. Proclaiming his marriage had not been legally binding conferred upon his daughter the stigma of illegitimacy. Eleven days after deposing of his inconvenient wife, Henry married Jane Seymour.

After ordering wife number five, Katherine Howard, to the chopping block, Katherine Parr became Henry’s sixth spouse; she brought Elizabeth into the royal residence and proved a loving stepmother. The lecherous king died in 1547, a fact that must have brought sighs of relief from single ladies desirous of keeping their heads. Mourning for her husband was short-lived as six weeks after becoming a widow Katherine married Thomas Seymour. Her stepfather became interested in the fourteen-year-old Elizabeth, and not in a paternal fashion. When Katherine died giving birth, Thomas approached Elizabeth with an offer of marriage which she deftly waved aside. His unwelcome attentions ended with his execution for treason.

At age twenty, Elizabeth was again in a precarious situation when her stepsister, Queen Mary, announced her engagement to Prince Philip of Spain. Protestants, alarmed that her future children would supplant Elizabeth in the royal succession, forever cementing Catholicism, organized a rebellion spearheaded by Sir Thomas Wyatt. In retaliation, Mary ordered Elizabeth’s imprisonment in the Tower of London where the hapless princess languished for two months. 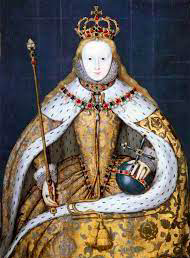 Upon Mary’s death from cancer, the twenty-five-year-old Queen Elizabeth I ascended the throne. Under her direction, the Church of England became the established religion, yet she allowed Catholics freedom of worship, thereby avoiding the religious strife of Bloody Mary’s reign. Another issue confronting Elizabeth was when parliament put intense pressure on her to marry; popular opinion held a queen should not reign without a king. Every inch Henry’s daughter, Elizabeth responded, A strange thing that the foot should direct the head in so weighty a cause.” Her single status led to her designation as the Virgin Queen that led not only to the name of an American colony and the Virgin Islands, but also introduced the given name Virginia.

The relative stability of the Elizabethan era ushered in a golden age of the arts. She was a patron of William Shakespeare and so great was her appreciation of Falstaff in Henry IV that she ordered a play devoted to the portly knight. In compliance, Shakespeare penned The Merry Wives of Windsor.

As Elizabeth never wed, the Tudor dynasty ended with her 1603 death. Although there were drawbacks to her single status, she remained steadfast in her decision, “Beggar woman and single far rather than Queen and married. “