In 1970, the quintessential hippie, Janis Joplin, crooned, “Oh Lord won’t you buy me a Mercedes Benz…” In all probability, Joplin did not know the strange story that lay behind the iconic car, that the christening involved an insidious irony.

The girl lost in automotive lore was born in Vienna as Adrienne Manuela Ramona who went by her parents’ nickname, Mercedes, the Spanish word for mercy. Emil’s father was Rabbi Adolf Jellinek; however, his son had no desire to follow in his religious father’s footsteps.  Emil’s passion was the newly invented motorcar, one he was able to indulge in as a result of his wife’s fortune, and his business of exporting Algerian tobacco to Europe. 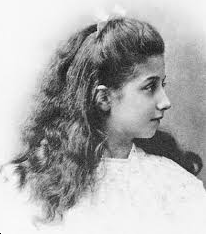 In 1896, Jellinek chanced upon an advertisement in a magazine for an automobile manufactured by Daimler-Motoren-Gesellschaft. He left for Germany and marched into the factory wearing a pith helmet and pince-nez, twirling his trademark dark moustache, and he purchased what became his prize possession. Winters were spent  in Nice, on the French Riviera, where he was a racecar driver, and competed under the name Herr Mercedes. He also sold Daimler automobiles to the well-heeled who had vacation homes in Nice. In 1890, Jellinek told the Daimler Corporation that if they designed a model that would increase speed from 25 miles an hour to thirty-five he would order thirty-six cars. They complied and Baron Henri de Rothschild had one delivered to his door. Another condition: the car would be christened Mercedes.  Paul Meyan, the director of the French Automobile Club, declared, “We have entered the Mercedes Era.” The proud papa legally changed his surname to Jellinek-Mercedes.

After a falling out with Daimler, Jellinek worked as a diplomat. During World War I, the French government accused him of espionage and confiscated his home, yachts, and cars. Bankrupt, he fled the country and died in exile in Switzerland.

Life held little mercy for Mercedes. She married an Austrian baron, with whom she had two children. The baron lost his wealth in the war, and the baroness resorted to begging in the streets. Leaving her family, Mercedes married Baron Rudolf von Weigl, who had a noble name, but no money. The marriage crumbled, and Mercedes died from bone cancer, age thirty-nine, alone in a small Vienna apartment in 1929.

Mercedes realized the irony that the car that bore her name was a luxury item, and yet she had been reduced to penury. Had she lived another decade, she would have been privy to yet another twist of fate. The Mercedes became the favorite vehicle of Adolf Hitler and his high ranking Nazis, and soon the three pointed Mercedes emblem, (symbol of dominion of air, land, and sea,) became, along with the swastika, emblematic of The Third Reich. The company, that later became Mercedes Benz after a merger,) aided the henchmen by taking out ads in the anti-Semitic newspaper, the Volkischer Beobachter. Daimler forced Jewish women from Ravensbruck to labor as worker-slaves. In addition to producing high end cars, it also became the leading armaments maker of tanks, trucks and rockets. Hitler might have put the brakes on his Mercedes had he known its namesake was a Jewish girl, buried beside her grandfather, the revered Viennese rabbi. The second line of the Joplin song applies to the architects of genocide, “I must make amends.”