A cherished childhood companion, the teddy bear is ubiquitous in cribs, birthday parties, and Valentine gifts. But who was Teddy and why a bear? The classic’s birth was due to a convergence of events far afield from those of youthful innocence.

When a border dispute broke out between Louisiana and Mississippi, President Theodore Roosevelt travelled to the South in the role of mediator. During a break in the negotiations, Governor Andrew H. Longino invited the President to join a hunting expedition led by Holt Collier, a former slave who had served under the Confederate General Nathan Bedford Forest. Collier tracked a 235-pound black bear; after it killed his dog, he beat it with his rifle butt and tethered it to a tree for the president to finish him off. Roosevelt refused to kill a defenseless animal. He rode away with the request the beast be put out of his misery. The pelt is kept in The Smithsonian.

The bear with the shoe-button eyes became a national craze and in 1904 it served as the unofficial mascot for Roosevelt’s re-election campaign. Women carried their bears with them when they went bicycling and out for tea. In England, A. A. Milne used his son, Christopher Robin, stuffed bear as the model for Winnie-the-Pooh. Michael Bond was inspired by a bear he bought from Selfridges to write Paddington Bear, so named after the London tube station. 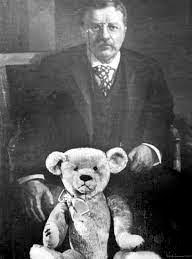 In 1963, Benjamin Michtom, the president of his family’s business, decided to commemorate Teddy’s 60th year anniversary. He contacted Mrs. Alice Roosevelt Longworth, Teddy’s daughter, with the offer he would give her an original bear if she agreed to pose with it. She responded, “What does a 79-year-old doll want with a 60-year-old bear?” Undeterred, MItchom approached Kermit Roosevelt, a grandson of the president, with the proposition if Kermit’s children took a photograph with the bear he would gift it to the family, with the understanding they would eventually donate it to the Smithsonian. The 1902 teddy bear entered the famous museum in 1964.

The 26th president’s life held many chapters: he fought with the Rough Riders in Cuba, was the youngest chief executive, received the Nobel Peace Prize, and was immortalized on Mount Rushmore. However, his light-hearted legacy is his namesake bear, although he preferred to be associated with another animal, the one that was the nickname of his political party. He referenced it after an assassin, John Flammand Schrank, fired on him while he was delivering a speech. Roosevelt continued with his address, “It takes more than that to kill a bull moose.”