Now and again, as ladies bowl over the remaining barricades, there emerges the specter that one day there may be a triumphant outcome for a female aspiring to the Oval Office. Victoria Woodhull made a prescient statement when she became the first female candidate to run for president and proclaimed, “What may appear absurd today will assume a serious aspect tomorrow.”

One hundred and forty years later, when Hillary Rodham Clinton dropped out of the 2008 presidential race, she made the stirring remark, “Although we weren’t able to shatter that highest, hardest glass ceiling this time, thanks to you, it’s got about 18 million cracks in it.” Few know, however, the name of the woman who put the first crack in that elusive glass ceiling.

The lady whose life would not have been out of place in a 19th-century novel, Victoria California Claflin, was born in 1838, the seventh of ten children who lived in Dickensian squalor in a wooden shack in Homer, Ohio, a whistle-stop town in Licking County. Her mother Roxanna, “Roxie,” was an illiterate German immigrant, a follower of the Austrian mystic Franz Mesmer (from which the word mesmerize derives.) The alcoholic patriarch, Ruben, “Buck,” peddled moonshine and opium as a cure for cancer.  In one instance, it resulted in murder charges. At age fourteen, Buck marketed his daughter as a medium in his travelling medical show; she was to state her father “made her a woman before her time.”  Her sister Tennessee, “Tennie,” Celeste, was obliged to hustle potions- and her body. In all likelihood, their shack went up in flames so Buck could collect insurance money. Victoria married at age fifteen, pushed by her pyromaniac parent into the arms of the far older “Dr.” Canning Woodhull who loved wine, women, and morphine. Despite the stigma of divorce, Victoria took her departure, along with her married name, daughter, Zula Maud, and son, Byron, who suffered from brain damage.  Victoria claimed Byron came by his disability when his father dropped him on his head. 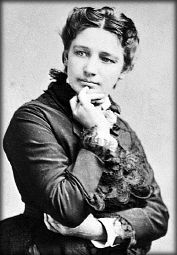 A second marriage was to Colonel James Blood, a Union Civil War hero and spiritualist. He did not just believe in freedom for slaves; as an adherent of “free love,” he insisted on an open relationship, a proposition that struck a respondent note in his wife. She later espoused, “I have an inalienable, constitutional right to change that love every day if I please.” Blood brought the beautiful and brilliant sisters to New York where they became the most notorious ladies in Manhattan. They treated the social norms of the 1870s as no more substantial than the spirits with which they professed they communicated.

The siblings made their first big splash in 1868 when they astounded a male-dominated metropolis by becoming the first women to open a brokerage firm on Wall Street. The press went berserk, and Harper’s Weekly dubbed them “the bewitching brokers.” The enterprise was all the more remarkable given the era’s mores where females were not even welcome to pass through Wall Street in covered carriages. Their office bore a sign: All gentlemen will state their business and retire at once. The official opening on February 14th was besieged by so many throngs of the curious that one hundred police officers had to maintain order. A great proportion of their clientele were ladies who preferred to work with members of their own sex: widows, high-class prostitutes, actresses. Suffragette superstar Susan B. Anthony heralded the arrival of the sisters on Wall Street as “a new phase in the women’s rights question.” The irony-one not lost on the sibling’s legion of detractors- Cornelius Vanderbilt had bankrolled their business. His investment was logical as Tennie was the mistress of the multimillionaire railroad baron whose term of endearment for his paramour was “little sparrow.”

On the flip side, Roxie and Buck had followed their daughters to Manhattan when the money had started to roll in, and Woodhull felt duty-bound to take them in. Victoria’s household included her two children, her sister, past and present husband, Roxie and Buck. To make matters worse, Roxie forged Tennie’s signature on a blackmail letter to Vanderbilt that led him to sever ties with his “little sparrow.”

Wall Street was just the beginning for the scandalous sisters of the Victorian era. With the funds earned from the brokerage, in 1870, Victoria and Tennie founded the radical newspaper, Woodhull & Claflin’s Weekly. Their periodical’s battle cry, “We advocate the rights of the Lower Million against the Upper Ten!” In the mainly feminist press, they printed installments of Karl Marx’s The Communist Manifesto.  Marx considered them a little too radical for his taste and found their interest in his economic doctrine confusing given their Wall Street wealth. Increasingly political, Victoria testified on suffrage for women to a congressional committee-the first female ever to address Congress. She argued that women already had the right to vote as all citizens born in the United States had been granted that right under the 14th Amendment. She also cited the 15th Amendment (that had abolished slavery in 1870,) as pertinent to women, who had long been in servitude. In response, the Ohio Representative, John Bingham, cried out, “Madam, you are no citizen...you are a woman!”

In May 1872, the Equal Rights Party that congregated in Apollo Hall, New York, nominated Woodhull to run against the incumbent Republican president, General Ulysses S. Grant. Woodhull stood before 668 delegates in New York and vowed to fight “despotism, inequality, and injustice.” She also campaigned to raise the hemlines on women’s skirts to alleviate the burden of dragging them through muddy streets. Perhaps even she could not have imagined a presidential candidate campaigning in pastel pants suits. Woodhull chose as her running mate escaped slave-turned abolitionist Frederick Douglass, who may not even have been aware he was on the ticket. Woodhull spoke to packed houses across the country, espousing that women needed to be freed from subservience in marriage just as the slaves had needed to be freed from slavery. The New York Herald endorsed the nonconventional candidate, and their headline declared: “Victory for Victoria in 1872.” Immediately, her checkered personal life was held under the spotlight, and the public had fertile grounds for attack- starting with her sharing her marital home with two husbands. Victoria defended herself by explaining she had taken in her alcoholic, disabled ex as an act of charity, not bigamy. Other poison barbs were directed at her ties to spiritualism and free love. The scandal was so great she had to withdraw eleven-year-old Maud from school. As a result of Victoria’s pioneering protest, cartoonist Thomas Nast drew her caricature dressed in black with bat wings sprouting from her shoulder blades, snarl upon her face, clutching a placard: “Be Saved by Free Love.” In the background, a woman struggled up a steep path, carrying a baby and an alcoholic husband, with the caption, “I’d rather travel the hardest path of matrimony than follow in your footsteps.”  The full-page cartoon was entitled, “Get Thee Behind me, (Mrs.) Satan!”

Hillary supporters, sporting yellow roses, visited Susan B. Anthony’s grave where they placed “I voted,” stickers on her tombstone. A far different scenario played out with the

19th-century female presidential hopeful. On Election Day 1892, the candidate and her sister were in Ludlow Street Jail. Two deputy marshals had appeared at the door of their brokerage house and noticing their carriage speeding down Wall Street, gave chase. They apprehended the sisters and produced a warrant charging them with sending obscene publications through the mail. The vice crusader Anthony Comstock, who referred to himself as a “weeder in God’s garden” had conspired to have them  arrested on a charge of obscenity after they  printed articles exposing the alleged affair of the city’s most eminent preacher, the Reverend Henry Ward Beecher, the brother of the author of Uncle Tom’s Cabin, Harriet Beecher Stowe. She had accused him of an adulterous affair with a female parishioner, Elizabeth Tilton. Victoria had not been incensed by his side-stepping of his marital vow; rather, she was upset by his hypocrisy of threatening brimstone from his pulpit for those who broke the 7th Commandment. In her paper, she had vowed to make it, “hotter on earth for Henry Ward Beecher than Hell is below.” What hurt her further was the United States District Attorney was a member of the Reverend’s Plymouth Church congregation. The arrest for sending the libelous periodical through the US post office led to the passage of the Comstock Act that sought to uphold a strict moral code by barring the circulation of “obscene literature and articles of immoral use.” Victoria and Tennie secured their release after posting $16,000 in bail. Spoiler alert: the female presidential candidate and her black running-mate did not garner a single electoral vote. Her percentage of the popular vote is undocumented (possibly because some of the polling stations discarded any ballots that favored her.) Not only was her liberal platform far beyond her times, there was also the matter of her age; at thirty-four she did not meet the thirty-five-year minimum. The authorities released the sisters a month after their arrest and exonerated them after a judge ruled that existing obscenity legislation did not apply to the press.

On that Election Day morning, Susan B. Anthony went to a polling station in Rochester, New York, and became the first woman in America to successfully insist on exercising her right to vote. She cast her ballot for President Grant whose Republican party had announced its willingness to listen to the ladies in the run-up to the election. Two weeks later, Anthony was also behind bars for attempting to cast a vote. Woodhull closed her campaign with a prophetic letter to the editor of the New York Herald, “To the public I would say in conclusion they may succeed in crushing me out, even to the loss of my life: but let me warn them and you that from the ashes of my body a thousand Victorias will spring to avenge my death by seizing the work laid down by me and carrying it forward to victory.”

Post-prison life took her on a downward spiral and Victoria and Tennie left for London where they “decided to use draconian measures to sanitize their images.” And sanitize them they did. As with their other outlandish schemes, their desire at reinvention worked. Within a few years, Victoria had taken her third husband, John Biddulph Martin, a wealthy banker; Claflin wed Sir Francis Cook and became Lady Cook. The newly minted Mrs. Martin-one of the first women in England to own a car—lived in a manor house on a 1,200-acre estate in the Cotswolds. She was a generous contributor and fundraiser to restore and purchase Sulgrave Manor, the home of George Washington’s ancestors.  As did Mrs. Banks in Mary Poppins, she worked to obtain British suffrage. She died in 1927, age 88, a year before English women had won the right to vote.

Mrs. Woodhull-Blood-Martin was a woman of contradictions: a stockbroker who embraced Marxism; a denouncer of traditional marriage who spent her final years as the wife of a member of the British landed gentry. How a rebel woman-in today’s parlance a nasty woman- had traversed such an extraordinary road remains Victoria’s secret.