Neil Diamond’s 1980 song embodies the hopes of immigrants who congregated at Ellis Island awaiting entry into the promised land, “Everywhere around the world/They’re coming to America/Every time that flag’s unfurled/They’re coming to America.” Between shaking off the shackles of the old world, apprehensive of the new, the strangers in a strange land did not expend thought as to why their port of entry bore the name of Samuel Ellis.

Ellis Island conjures a black and white image of steerage passengers grasping a ship’s rail as they approached the modern land of milk and honey. What brought hope were the words of the Russian-Jewish Emma Lazarus inscribed on the pedestal of the nearby Statue of Liberty, “Give me your tired, your poor/Your huddled masses yearning to breathe free…”

Places, like people, have pasts, and the three acres of Liberty Island had quite a storied one. The Mohegan tribe referred to the small area as Kioshk, Gull Island, because of the proliferation of birds, its earliest inhabitants. The Dutch called it “Little Oyster Island” due to its quantity of shellfish. In contrast, during the 1760s, it became Gibbet Island, the site of gallows where criminals, mutinous sailors, and pirates swung from a rope.

During the American Revolution, Manhattan merchant Samuel Ellis opened a tavern on the island that catered to local fishermen. Upon his 1794 death, his will bequeathed his property to his pregnant daughter, Catherine Westervelt, with two caveats: one, the child would be a boy, two, she would christen him Samuel Ellis. When the baby died in infancy, the property became a matter of contention for his heirs.

In 1808, Samuel’s descendants sold the island for $10,000 and ownership passed to the State of New York. The government used the grounds for the incarceration of British prisoners in the years of the Revolutionary War. During World War II, the facility served as a center for enemy aliens: Germans, Japanese, and Italians. Under the tyranny of the Red Scare, immigrant radical such as Emma Goldman stayed there while awaiting deportation. However, the main function of Ellis Island was as an immigration center, a purpose that it served for sixty years. An estimated 40% of all current American citizens can trace their ancestry to the twelve million who passed through its portals. In 1892, the first person processed was Annie Moore, a teenager girl from Ireland; in 1954, the last person processed was Arne Peterssen from Norway.

Initially, most of the immigrants hailed from Western Europe: Germany, Ireland, Britain. Subsequently, the majority poured in from Eastern Europe to escape the Polish pogroms, the Irish famine, Central Europe’s wars. The Jews who fled from czarist persecution spoke of America as the “goldene medina,” “the golden land.” As immigration often delivered salvation, Emma’s surname is a metaphor for Lazarus, the man who Jesus raised from the dead. While most of the newcomers remain anonymous, some achieved acclaim: Russian composer Irving Berlin, (Israel Isidore Berlin,) comedienne Bob Hope, England, physicist Albert Einstein, Germany. Since 1990, the island in which the gulls and oysters once held dominion is the Ellis Island Immigration Museum where the cobwebs of yesteryear still hover. If Samuel Ellis were to walk through its door, he would feel he had imbibed too much ale from his tavern. 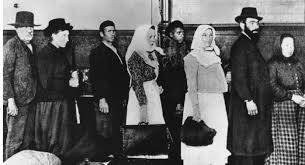 Today, America remains deeply conflicted over the issue of immigration; however, the torch-holding Roman goddess urges us to abide by the Latin words of the Great Seal of the United States, printed on every coin, “E pluribus unum,” “out of the many comes one.” The Statue of Liberty, nicknamed The Mother of Exiles, represents a plea for America’s shores to serve as welcoming ones, “I lift my lamp beside the golden door.”