When Dorothy journeyed along the yellow brick road, she chanted, “Lions, tigers, bears, oh my!” Twenty-six years later, a contemporary queen treads a path of purple whose chant could well be, “Castles, corgis, crowns, oh my!” The modern monarch has a life that rivals the marvels of Oz. 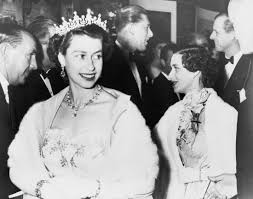 For the irony file, the world’s longest reigning royal was not slated to become Her Most Excellent Majesty Elizabeth the Second, by the Grace of God of the United Kingdom of Great Britain and Northern Ireland and of Her Other Realms and Territories Queen, Head of the Commonwealth, Defender of the Faith. At the time of Elizabeth Alexandra Mary Windsor’s birth, as her father, Prince Albert, was a second son, the mantle of monarchy belonged to her uncle Edward, the Prince of Wales. Because the princess was never supposed to be queen, her, along with younger sister, Margaret, childhood was relatively typical, insofar as typical entailed having King George V as your grandfather. The calm shattered in 1936 when her uncle Edward VIII repudiated his ermine robes after 325 days to wed American Wallis Simpson. A shocked footman relayed the news to the young princesses. Margaret asked her ten-year-old sister, “Does that mean you will have to be the next queen?” “Yes, someday,” Elizabeth replied. “Poor you,” Margaret responded. Only the arrival of a baby brother would have altered her fate.

Margaret’s negative comment regarding the crown originated with her father who had sobbed when he and his mother discussed the abdication, partially as he dreaded his stutter would be on public display. Nevertheless, he accepted the role of King George VI, and, along with his wife, Elizabeth, moved with his family to Buckingham Palace. As any excursion into London resulted in a media frenzy, normalcy would never be their norm. In 1933, the king gifted Elizabeth with Dookie, a corgi which helped her cope with the pressures of her station. (She has owned at least thirty of the breed). Queen Mary, who always wore a tiara to dinner even if she and her husband dined alone, drilled protocol into her granddaughter.

In 1940, with the outbreak of war, the close-knit family were often separated as the king and queen sent their daughters to Windsor Castle, about twenty miles away from the capital, and therefore not a likely target during the Blitz. The girls remained in their sheltered enclave for five years. A perk during the war time austerity was a thatched-cottage playhouse, the Y Bwthyn Bach, a present from the people of Wales, that had perks such as a heated towel rack, an electric fireplace, French dolls, and eight fur coats. In 1945, Elizabeth enlisted in the Women’s Auxiliary Territorial Services as No 230873 second subaltern Elizabeth Windsor. Photographs of her, alongside the military, became staples in Allied propaganda.

Following Germany’s defeat, in Buckingham Palace, Elizabeth became reacquainted with her third cousin, Prince Philip Mountbatten, who she had first met at age thirteen at the Royal Naval College in Dartmouth. At that time, she had been mainly enthralled at Philip’s agility in jumping over tennis nets. Upon their reunion, the seventeen-year-old was still taken with the twenty-two-year-old who had spent the war years as a naval lieutenant on a British destroyer that had been under danger of bombardment by German Stukas. Their match seemed improbable: she was the daughter of King George VI; he was the nephew of the deposed king of Greece; the Windsors were the lords of majestic castles; his family were exiles. Despite their differences, romance blossomed: Philip’s terms of endearment for Elizabeth were Lilibet, Sausage, or Darling. The prince proposed, and the twenty-year-old princess accepted without consulting mum and dad. During their 1947 wedding, the crowned heads of Europe and the world’s most powerful politicians were in attendance. Those not invited to the Westminster Abbey extravaganza were the groom’s sisters due to their Nazi husbands, as well as her disgraced uncle, who, after relinquishing the crown, had become the Duke of Windsor. The couple took their vows in front of an estimated 2,000 in-person guests-20 million around the world- that lent a ray of light into a world reeling from the atrocities of the war. The princess’ gown was truly fit for a princess: it consisted of ivory silk, crystals, and 10,000 seed pearls. Her Russian fringe tiara had once belonged to her grandmother, Queen Mary. The newlyweds received 2,500 presents: President Truman gifted a Steuben bowl, while Gandhi sent a piece of lace he had woven by hand. From her parents, she received a nineteenth century sapphire and diamond necklace and Cartier diamond chandelier earrings. When the crowds cheered their 1947 wedding, neither expected Elizabeth would be crowned anytime soon, but bluebloods are also the playthings of the gods.

In 1952, Elizabeth and Philip were in Kenya in a hotel perched in a tree from where the princess snapped photographs of elephants. They descended to the devastating news that her beloved father had passed away. Her cousin, Lady Pamela Mountbatten, who had accompanied her to Africa, recalled that Elizabeth had “climbed up that ladder as a princess but had climbed down as a queen.” Upon her return to London, although harboring misgivings that Elizabeth was only twenty-five, Prime Minister Winston Churchill stated, “Famous have been the reigns of our queens. Some of the greatest periods in our history have unfolded under their scepter.”  For the coronation-the first to be televised in the Crown’s 1,200-year-old history-Uncle Edward was again left off the guest list-for his abdication as well as hobnobbing with Hitler. He said of the secondary snub, “What a smug, stinking lot my relations are.” A 24-foot-long gold stagecoach carried Elizabeth to the ceremony; her dress bore the symbols of Great Britain and the Commonwealth nations: a rose, a thistle, a shamrock, a maple leaf, and a fern. The most sacred part of the ceremony was not telecast: a priest anointed the queen with holy oil. Scepter in hand, balancing a five-pound solid-gold crown, Elizabeth II accepted her throne and her niche in history. Over the years, one of her sorrows was the sun setting on the British Empire, with events such as the return of Canada, Hong Kong, and Barbados. Philip, the Duke of Edinburgh, became royal sidekick, and initially bristled against his wife’s staggering status. As royal consort-not king-protocol dictated he walk two paces behind her in public. Despite rumors he was a serial philanderer, Elizabeth’s love never faltered. On the night of their 50th wedding anniversary, she stated, “but he has, quite simply, been my strength and stay all these years.” The couple had children Prince Charles, Princess Anne, Prince Andrew, and Prince Edward. The bond remained unbroken until Philip’s passing at age ninety-nine.

Elizabeth’s main passion seems to be to the role to which destiny cast her. She has kept the faith to the promise she made while on tour with her parents in Cape Town on her twenty-first birthday, “I declare before you that my whole life, whether it be long or short, shall be devoted to your service and the service of the great imperial commonwealth to which we all belong.”

From the outside peering in, Elizabeth is the most enviable of women: the possessor of a loving family, mind-boggling wealth, has pressed the flesh of the famous, and travelled the globe. However, even the ancient Windsor armor could not shield her from horror. In 1974, Ian Ball attempted to kidnap Princess Anne at gunpoint; he said he intended to donate the 3,000,000 pounds for the treatment of psychiatric patients. Five years later, the IRA assassinated Philip’s uncle, Lord Mountbatten, along with his grandson. Another terrifying incident occurred when seventeen-year-old Marcus Sarjeant fired six shots, blanks, during the Trooping the Colour while Queen Elizabeth was on horseback. The Queen garnered accolades for her calmness: she did not lose control of Burmese, her startled mount.

Queen Elizabeth stated, “1992 is not a year on which I shall look back with undiluted pleasure.” She pronounced it her “Annus horribilis,” Latin for “horrible year.” Some of the sorrows she weathered: the breakdown of the marriages of Andrew, Anne, and Charles, as well as a fire damaged Windsor Castle. More misery lay in wait: in 1997, her former daughter-in-law, Princess Diana, lost her life in a car accident. The public was angered at Elizabeth’s initial failure to address the tragedy, an omission they viewed as indifference.

However, two decades later, in 2012, her annus mirabilis arrived. The queen’s diamond jubilee, commemorating her 60th year on the throne, drew and estimated one million people to London for a four-day party filled with pageantry. Aboard a royal barge, the monarch led a 1,000-vessel flotilla down the Thames; 2,012 beacons shone in her honor from the Scottish Highlands to the Channel Islands. Elton John and Paul McCartney serenated her at a concert outside Buckingham Palace. In the same year, for the opening of the Olympic ceremony, the queen appeared in a Bond movie spoof where she and secret agent 007 appeared to parachute -shades of Pussy Galore-onto a stadium platform.  The priest’s holy oil certainly proved potent. Given Elizabeth’s tenacity, hopefully it will be many a year before England employs the code name for her passing, “London Bridge is down.”

The Queen’s greatness lies in her devotion to duty, her avoidance of scandal. Elizabeth understands that it is not wise to let the public see the magician behind the curtain as that would detract from the enchantment of her emerald castle.