Hamlet railed, “Frailty, thy name is woman!” and in this vein female Victorians struggled against the slings and arrows of misogyny: they could not vote, serve on jury duty, attend university. Their corseted bodies mirrored the shackles society placed on their minds. Despite this handicap, one lady launched not one, but two, beloved pieces of Americana. Although her contributions differed in nature, they shared the commonality of animals-one a lamb, the other a turkey.

This mother of invention, Sarah Josepha, was born on a farm in Newport, New Hampshire, in 1788 to Revolutionary War hero Captain John Gordon and Martha Buell. Contrary to the mores of her era, her parents believed in education for girls, and her elder brother Horatio, a graduate of Dartmouth, served as her tutor. At age 18 she took the nontraditional role of a teacher at a private school, and in her spare time, penned poetry. Sarah married lawyer and Free Mason, David Hale, in 1813; when she was pregnant with their fifth child, her husband died from pneumonia. The widow, as Queen Victoria did at the passing of Albert, never wore any color but black. 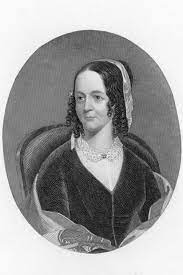 As his will left her only slightly wealthier than Mother Hubbard, Sarah turned to writing, and with the support of David’s lodge, she published a collection of poems followed by an 1827 novel, Northwood: Life North and South. This book made her the country’s first female author as well as the first to write about the evils of slavery. Its premise was slaves should be relocated to Liberia rather than toil as American beasts of burden.

The novel attracted the attention of the Reverend John Blake who made Hale the country’s first female editor when he hired her for his Boston publication, the Lady’s Magazine, and after it became Godey’s Lady’s Book-the Good Housekeeping of its day, she settled in Philadelphia. The periodical, renowned as much for its dress patterns as its uplifting articles, was referred to as the Victorian Bible of the Parlor. Hale became the last word on fashion and manners in 150,000 homes, and she remained at its helm until age ninety, a year before her death. Sarah wielded her pen not just to tell women what to wear but also to shape public sentiment. Its 1830 edition included Sarah’s poem, “Mary’s Lamb,” that later became the beloved nursery rhyme, “Mary Had a Little Lamb.”  Legend has it that it was inspired by Mary Elizabeth Sawyer whose pet lamb followed her to school, a prank suggested by her brother. Devoutly religious, Hale intended it as a religious allegory for children: Mary, the mother of God, the lamb, Jesus, the fleece as white as snow, the purity of Christianity. In 1877 Thomas Edison invented the phonograph and the world’s first recording was the scientist reciting “Mary Had a Little Lamb.”

Sarah was the Martha Stewart of the pre-Civil War era, filling her hugely popular magazine with advice on how to build a dream cottage, cook a seven-course dinner, and decorate the perfect spring hat. Under her leadership, Lady Godey’s popularized white wedding dresses and Christmas trees, trends often credited to Queen Victoria. She also published the works of well-known authors such as Harriet Beecher Stowe, Nathaniel Hawthorne, Washington Irving, Henry Wadsworth Longfellow, and Ralph Waldo Emerson. In 2012 an anonymous bidder purchased a letter from Edgar Allan Poe to Ms. Hale for $164,000; in it the mystery writer declined to write an article for her magazine as, after a recent bout of illness, he was too caught up in other literary obligations.

Sarah was a cheerleader of many causes and a priority for her was women’s education. She deplored the widespread illiteracy among her sex, and in her role as editor was instrumental in supporting Matthew Vassar in the founding of his eponymous university.  Sarah also helped solicit the $30,000 funds (the equivalent of $800,000 in contemporary currency) for the completion of the Bunker Hill Monument in Boston, and she also worked to obtain property ownership rights for wives. Despite her strides for female emancipation, she still subscribed to the cult of ‘true womanhood’ that entailed the highest calling for her sex was to maintain a Christian nursery, one ruled by the Lamb.

Hale had a formidable roll call of accomplishments, but her greatest one was yet to come. After Christmas, the busiest travel day of the year is Thanksgiving. The good china makes an appearance, it’s acceptable to watch football all day and to eat oneself into a turkey coma-the reason many don the unofficial garb of pants with elastic waists. The turkey consolidated its place at the center of the table thanks to the late 19th century marketing efforts of the poultry industry. Had it not been for this campaign, it would have been another animal to receive a presidential pardon. Most assume we have the Pilgrims to thank, but like most things, there is a back-story. More than those who alighted from the Mayflower, Sarah Josepha Hale gave America Thanksgiving. Until she came along the only national holiday was Independence Day, and it involved only men parading down the street, creating large explosions, and consuming massive quantities of liquor. Women were regulated to the role of spectator, waving handkerchiefs or serving as décor on the occasional float. In Northwood Hale included an entire chapter about a traditional New England celebration, and as the North-South conflict deepened, she became ever more committed to its cause. She believed regional observances should be national and as such would help bind the fractured country. In an 1859 editorial, she wrote, “Everything that contributes to bind us in one vast empire together, to quicken the sympathy that makes us feel from the icy North to the sunny South that we are one family, each a member of a great and free Nation, not merely the unit of a remote locality, is worthy of being cherished.”

Although Thanksgiving had been observed since 1621 when William Bradford, the governor of Plymouth Plantation, called for a day of prayer and thanksgiving, it had evolved as a haphazard tradition. Thanksgiving occurred on different days in various states-mostly in autumn-while some parts of the country ignored it in the spirit that it violated the separation of church and state. These ad hoc celebrations were primarily invoked in response to specific events. They were religious in nature, intended to ask God’s help to cope with hardships, or to offer a day of prayer for times of prosperity.  In 1863 Lincoln designated four Thanksgiving days, two to commemorate Gettysburg and Vicksburg, while Jefferson Davis proclaimed different dates to correspond to each battle of Manassas.

In vain Sarah petitioned Presidents Fillmore, Pierce, and Buchanan to set aside a uniform day, but for 36 years her pleas fell on deaf ears. She hit pay dirt when her letter reached Abraham Lincoln.  She wrote “Sir, permit me as editress of “Lady’s Book,” to request a few minutes of your precious time, while laying before you a subject of deep interest to myself and-as I trust-even to the President of the Republic of some importance. This subject is to have the day of our annual Thanksgiving made a national and fixed union festival.” She added that a “national and fixed Union festival” should occur on the last Thursday of November because that was when George Washington had declared the first observance in 1789.

On October 3, 1863, five days after receiving Sarah’s letter, President Lincoln declared, “I do therefore invite my fellow citizens in every part of the United States, and also those who are at sea and those who are sojourning in foreign lands, to set apart and observe the last Thursday of November next, as a day of Thanksgiving and Praise to our beneficent Father who dwelleth in the Heavens.” In that fall Lincoln had precious little of which to be thankful. The Union victory at Gettysburg the previous July had come with a terrible price-a combined 51,000 estimated casualties and nearly 8,000 dead. Enraged by the draft laws, rioters in Northern Cities such as New York went on bloody rampages. Moreover, the President and his wife Mary were in mourning for the loss of their 11-year-old son Willie who died the year before. Lincoln’s fervent hope was that a standardized celebration would help unite a divided United States.

Sarah Josepha Hale remains an unsung heroine. However, there is a memorial to her in Newport that showcases her role as America’s first female novelist and editor, fundraiser of Vassar, the composer of “Mary Had a Little Lamb,” and the mother who birthed a national holiday. It features a bronze bust of the Victorian woman-arms in shackles to highlight her anti-slavery views- that sits atop a black pillar, representative of her long widowhood. Her name also lives on in her hometown where an annual award is presented to distinguished writers. Its first recipient was Robert Frost; John F. Kennedy reluctantly turned down the honor because of a prior-and fateful- commitment in Dallas.

Looking back at the accomplishments of an indefatigable woman, everywhere that Sarah went-like Mary’s lamb- success was sure to go.