“Taxation without representation is a tyranny.”

When Jack let go of Rose’s hand and disappeared into the icy depths of the Atlantic Ocean, Titanic fans let out a collective gasp. Those of a less romantic bent were left wondering why the elderly Rose consigned the Le Coeur de la Mer, The Heart of the Ocean, diamond to a watery grave. The non-celluloid counterpart to the fabulous blue gem reveals another tragic tale.

Princess Sophia Alexandrovna Duleep Singh was the granddaughter of Maharajah Ranjit Singh, the legendary one-eyed “Lion of the Punjab,” who ruled the Sikh Empire that extended from the Khyber Pass in the west to Kashmir in the north to Tibet in the east. He rode through his lands with the storied Koh-I-Noor diamond strapped to his sleeve. A century later, the gem became the prized possession of Ranjit Singh. After his passing, at which time several of his wives burned themselves on his funeral pyre, the next maharaja was his son, Duleep Singh. The British seized control and forced the eleven-year-old to relinquish his kingdom to the crown. Four years later, Duleep left for exile in England where he converted from Sikhism to Christianity. Queen Victoria said of her subject, “I always feel so much for these poor deposed Indian princes.” Her pity did not extend to returning his lands or the Koh-I-Noor. 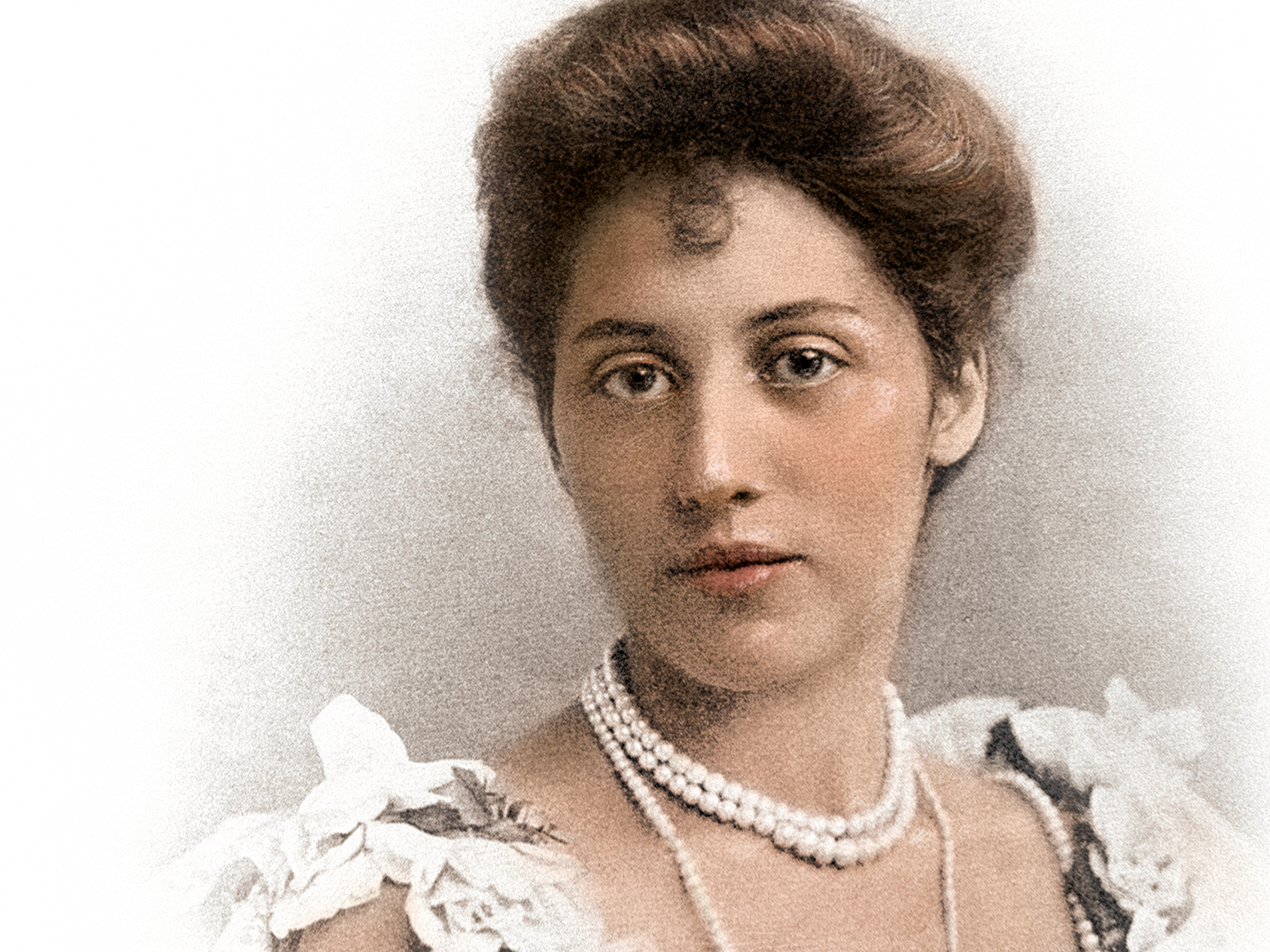 The king without a kingdom married Bamba Müller, a Cairo born illegitimate daughter of a German merchant and an Abyssinian slave who placed their child in a missionary ward. In compensation for the confiscation of his birthright, Queen Victoria provided a 2.5-million-pound annual stipend in contemporary currency. The money led to Elveden Hall, a Suffolk estate transformed into a Mogul palace. Sophia was the fifth of his six surviving children, and the Singhs lived in great luxury; gardens held ostriches, leopards, and Indian hawks. Queen Victoria became Sophia’s godmother and gifted the child a sumptuously dressed doll known as “Little Sophie.” The Prince of Wales was a regular visitor. A presentation for debutantes at Buckingham palace ensured Sophia’s social standing.

The idylls of the Punjab Princess came with an expiration date. Her parents’ marriage ended due to her father’s promiscuity, gambling, and opulent lifestyle. Unable to pay his exorbitant debts, Duleep-who referred to Queen Victoria as Mrs. Fagin after the criminal in Oliver Twist- dedicated himself to wrestling back his stolen kingdom. Foiled in his attempt to return to India by the British government, Duleep ran off with Ada, a hotel chambermaid, leaving his family in dire financial circumstances. When he heard of his wife’s death, he sent a telegram to his oldest son, “Heartbroken-will write next week.” The deposed royal passed away at age fifty-five, destitute, in a Paris hotel, a casualty of the Raj. In nobles oblige, Queen Victoria installed her seventeen-year-old goddaughter in “a grace and favor” residence opposite Hampton Court Palace. The shy Sophia was content to dress in the latest Parisian fashions, breed her prized Pomeranians, and participate in the bicycle craze.

The pauper princess became a rebel with a cause through a series of events, ones that made her no longer willing to be an exotic bird in a gilded cage. Her sister Bamba had received acceptance from Northwestern University, near Chicago, to study medicine, a career denied to women in the United Kingdom. However, although several American colleges were admitting female medical students, the general public abhorred the idea; the belief was that lady doctors were an affront to the natural order. Giving in to public opinion, Northwestern rescinded its offer. A despondent Bamba returned to the United Kingdom. Her bitterness over the discrimination awakened Sophia’s political conscience.

Britain had forbidden the members of the Singh family from returning to their ancestral homeland, a precaution taken against the fear the blue bloods might incite dissent against the Raj. The Indians were not overjoyed with Queen Victoria’s proclamation that India was the jewel in her crown. However, when the English government planned a spectacular celebration near Delhi for the coronation of Edward VII, three of the Singh sisters secretly sailed for the subcontinent. The siblings rode across the lost lands on horseback and made their way north to the family’s old stronghold of Lahore. In their ancestral homeland, they realized the magnitude of what the British had stolen from the Singhs. The trip brought an understanding why their father had been mired in a bitterness that had eroded his soul. When she returned to England, Sophia was a committed anti-colonialist who wrote, “India awake and free yourself!” Sophia likened the English government’s subjugation of her colonies to its oppression of women. The connection was made manifest after Lord George Curzon relinquished his post of Viceroy of India-where he vehemently opposed the country’s independence- and became the president of the National League for Opposing Woman Suffrage.

Her first step on the path of crusader was to sell copies of The Suffragette newspaper outside Hampton Court Palace. Her efforts earned her the name: The Hampton Court Harridan. If this were not infuriating enough for the royals, Sophia joined the Women’s Tax Resistance League, an act that led to two court appearances. She told the authorities, “When the women of England are enfranchised I shall pay my taxes willingly. If I am not a fit person for the purposes of representation, why should I be a fit person for taxation?” In response, bailiffs entered her home and left with valuable jewels as payment.

Princess Singh became affiliated with the Women’s Society for Social and Political Union, the country’s leading suffrage organization. The disenfranchised ladies chained themselves to lampposts, smashed windows, and bombarded parliament with complaints. Their efforts had promised to bear fruit until Prime Minister Herbert Asquith sabotaged legislation that would have given women who owned property the right to vote. Infuriated, the spurned ladies turned to more militant measures.

In 1910, on “Black Friday,” three hundred suffragettes marched to the seat of the British Parliament, The House of Commons. At the head of the group was the organization’s leader, Emmeline Pankhurst; beside her was a diminutive woman, Sophia Singh. She was the focus of curiosity: she was Queen Victoria’s goddaughter, a fixture at society parties, had graced the covers of fashion magazines. On this date, Sophia walked with a group who had been warned that if they persisted, matters could turn ugly. Outside the Commons, police officers turned on the protestors, knocking them to the ground. Home Secretary Winston Churchill had ordered the officers to refrain from making arrests as he did not want jails filled with rabble-rousing suffragettes, hell-bent on garnering publicity. Instead, the strategy was to tire the demonstrators, forcing them to leave of their own accord. For five hours, the scenario played out; at one point, Sophia charged at an officer who was harassing a demonstrator. Infuriated, Sophia demanded his badge number and later lodged a formal complaint. Churchill signed a memo with the order to drop any investigation. Similarly, Churchill also refused to look into the deaths of two women who had died of injuries sustained during the protest.

The following year, on the day of the King’s Speech to Parliament, Sophia joined a march on Downing Street. Dressed as a fashionable matron and holding an expensive fur muff, police officers assumed she was a well-heeled bystander who had come to wave at the prime minister. The officers were shocked when she pushed her way through the crowds and threw herself at Prime Minister Asquith’s car, shouting a feminist slogan. After the collision, she pulled from her muff a banner that she unfurled that bore the words, “Give Women the Vote”  As with her father before her, Sophia proved to be a thorn in the side of the British. King George V, Victoria’s grandson, was so agitated by Sophia’s civil disobedience he asked his staff, “Have we no hold on her?” The police hauled many of the protestors to jail where they went on hunger strikes. Afraid of being responsible for deaths on their watch, the authorities initiated forced feedings.  Since she was Queen Victoria’s goddaughter, Princess Singh did not spend time behind bars. Nevertheless, a dossier held records of the princess turned protestor.

After World War I erupted, Sophia obeyed Pankhurst’s order to suspend the struggle for suffrage in order to concentrate on the war effort. The outbreak of fighting provided an additional horror for Sophia as her sister Catherine had moved to Germany after her marriage. Sophia raised money for Indian troops deployed on the Western Front, poorly equipped to withstand the unfamiliar cold. She traded Parisian couture for the Red Cross nurse’s uniform and tended to wounded Punjab soldiers convalescing in Brighton. Although she hardly spoke a word of Hindu, the soldiers were overcome with emotion that their nurse was none other than the granddaughter of the great Maharaja, the Lion of the Punjab. Faced with financial hardship, and with the welcome mat to Hampton Court withdrawn, Princess Singh retreated to the countryside with one of her sisters. In her new lodging, Sophia harbored evacuees from London and provided an air raid shelter-one she never used. Instead, Sophia stayed in her house blowing cigarette smoke out the window. No longer a clothes horse, she most often sported a scruffy jacket and Wellington boots. The only link from her past were her beloved Pomeranians.

The rebellious royal spent her old age in the company of her dogs; “Little Sophie” was the only memento of her former opulence. Although she had played many roles in her tempest -tossed life, the one Sophia considered most essential was apparent from her entry in “Who’s Who?” that she contributed shortly before her 1948 death. Under interests she wrote, “The Advancement of Women.”

Sophia lived long enough to see both her life’s causes: female suffrage and Indian independence. One event Sophia never witnessed was the return of the mythic Koh-I-Noor that had once graced the Peacock throne of the Mughal emperor in Delhi. The diamond beyond price resides is the Tower of London, and in theory, the next time it will make a public appearance will be at the coronation of the future King Charles III, where the mythical jewel in the crown will be worn by his consort, Camilla. As former possessors of the gem have met dire fates, perhaps the Koh-I-Noor should be returned to India lest it bring misfortune to the House of Windsor as it did to the Singh dynasty.

The interplay of two diverse cultures shaped the destiny of Princess Sophia, who, had fate played a different hand, would have been a majestic maharani. Her life disproves the words of Indian-British poet Rudyard Kipling, “Oh, East is East and West is West, and never the twain shall meet.”