The cry, “There’s gold in them thar hills!” served as the clarion call that drew thousands to California. While some prospector’s gained wealth, Levi Strauss attained immortality by putting his name on the backsides of the world.

Ironically, blue jeans, a staple of Americana, began with Jewish, Bavarian immigrant, Loeb Strauss, who arrived in New York on steerage to join his brothers in their dry-goods business. Determined to strike his own brand of gold, Loeb opened a San Francisco wholesale fabric store he called after his nickname, Levi. Strauss would have remained a forgotten entry on an Ellis Island register had he not created the best-selling garment of all time.

Jacob Davis, an émigré from Latvia, was a Reno, Nevada, tailor, who reinforced his customers pants with copper rivets on the pockets so that they could withstand the weight of tools and nuggets. Wildly popular, Jacob wanted to apply for a patent, but lacked the $68.00 filing fee. He contacted his San Francisco fabric supplier and suggested they become partners with Levi providing the money and with Jacob supplying waist overalls. Levi Strauss & Company received patent number 139,121 for “improvement in fastening pocket-openings.” The original design, ‘XX,’ became known as number 501. Levi and Jacob’s early innovation was to substitute duck cloth for denim dyed with indigo to better camouflage the dirt from panning for gold. In 1886, Levi designed a beige leather label on the back of his product that showcased a pair of jeans pulled in two directions by horses to represent the garment’s durability. Although the gold eventually disappeared, jeans, previously called waist overalls, never went out of fashion.

With his newfound wealth, Levi was one of the founders of Temple Emanu-El, San Francisco’s first synagogue. He passed away in 1902; never having married or had children, he left the bulk of his $6 million estate to his four nephews and charitable organizations. His descendants, who still control the business, have a net worth of $4 billion. 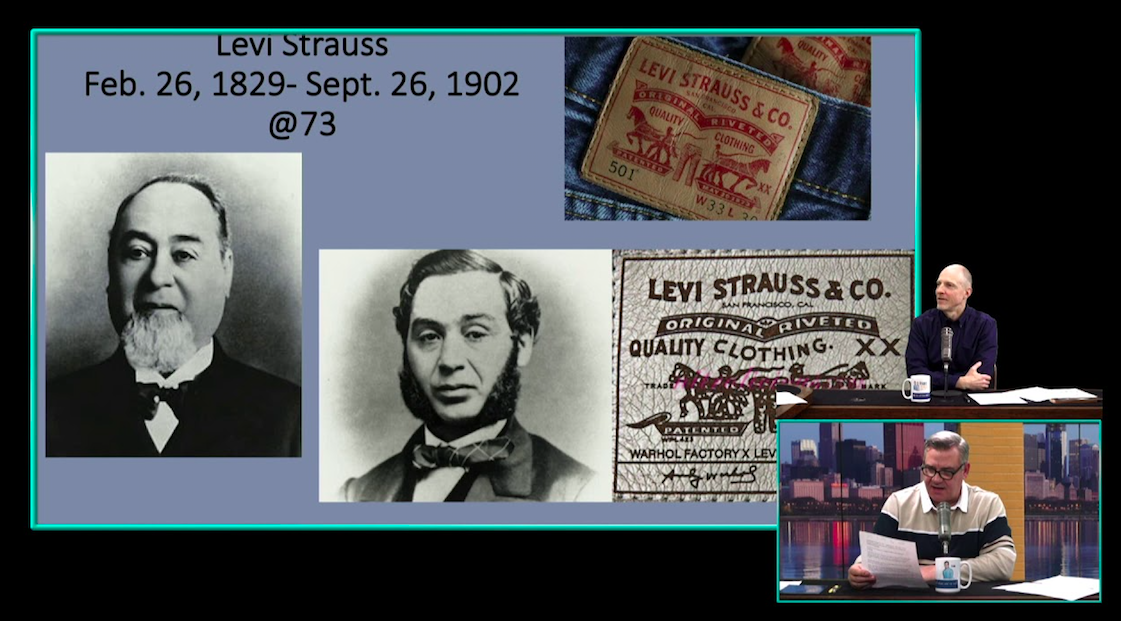 Although the Gold Rush ended, the miners’ garb lived on with various adaptations such as cuffed in the fifties, bell-bottoms in the sixties, designer in disco days, saggy in the hip-hop era. Hollywood romanticized jeans with legendary bad boys John Wayne, Marlon Brando, and James Dean. Denim became the unofficial uniform of the counterculture; the hippies preferred theirs ripped and faded. On Bruce Springsteen, blue jeans were blue collar; on Snoop Dogg, gangsta; on Britney Spears; jailbait. The pants went high end and became associated with the famous fashion houses. “Three O” sold one pair woven with threads of 10-carat gold for approximately $11,500. In 2018, the Levi Strauss Museum obtained an 1886 pair for almost 100,000.

Two Old World merchants would have been astounded that their brainchild had won more than the West. Jeans had travelled from the 49ers panning for gold to cowboys riding to their home on the range to Rosie the Riveter shouting, “We can do it!” Due to their enduring popularity, a pair of Levis entered the permanent collection of the Smithsonian.  One can only imagine their expressions if they could have seen the 1980 Calvin Klein ad with its caption, “What comes between me and my Calvins? Nothing.” And what would they have said of Jessica Simpson when she wore her Daisy Dukes?

French designer Yves Saint Laurent paid tribute, “I have often said that I wish I had invented blue jeans. They have expression, modesty, sex, simplicity-all that I hope for in my clothes.” Although dozens of companies have jumped on the jean bandwagon, Levi remain the origin of the species. The Neil Diamond song holds true, “Forever in Blue Jeans.”