Towering 1,000 feet above Paris, the Eiffel Tower antithetically encompasses the darkest chapter of history, the essence of romance. Despite attracting millions of tourists each year, the monument has dwarfed the man who willed it into existence.

A master engineer, dubbed “the magician of iron,” Alexander-Gustave was born in Dijon, France, in 1832. His father, François Boenickhausen, a soldier in Napoleon’s army, changed his surname in tribute to the Eifel Mountains of his ancestral Germany. His mother, Catherine, owned a coal business that flourished due to the Industrial Revolution. After graduation, Gustave was set to work with his uncle; however, a bitter family feud closed that avenue, and he turned his sights towards engineering.

At age twenty-seven, in Bordeaux to build an iron bridge to span the Garone River, Gustave fell in love with the seventeen-year-old Adrienne Bourgès. Her father, a wealthy wool merchant, forbade the match as he felt Eiffel did possess sufficient wealth or social standing. Afterwards, he wrote his mother to find him a bride, “a good housekeeper who will not pester me too much, who will cheat on me as little as possible, and who will give me fine healthy children that will in fact be mine.” Teenaged Marguerite Gaudelet was also from Dijon from his hometown; they had five children and remained devoted until she passed away fifteen years later.

Among Eiffel’s engineering feats was designing the interior frame for the Statue of Liberty; without the metal ribcage, the lady with the torch would not have been able to withstand the fierce winds of New York harbor. In addition, he designed the two spiral staircases inside the monument. The commission cemented Eiffel’s reputation, and France approached the master engineer to construct a unique entranceway for the 1889 World’s Fair in Paris that would coincide with the 100th anniversary of the French Revolution. By then, Eiffel was in his late fifties and at the height of his career; therefore, putting up a temporary structure was not enticing, especially as fellow Frenchman, Gustave Bartholdi’s Statue of Liberty was to reign forever. He was far more interested in working on the emerging Paris Metro. Ultimately, Gustave had a change of heart. Lore holds it that the widowed Eiffel agreed to the revised design due to its resemblance to a giant letter A that would serve as a tribute to the lost love of his youth.

At the onset, opposition was fierce to the metal pyramid that would rise from the banks of the Seine. Writers such as Guy de Maupassant, Emile Zola, and Alexander Dumas the younger voiced their outrage; many compared it to a contemporary Tower of Babel. 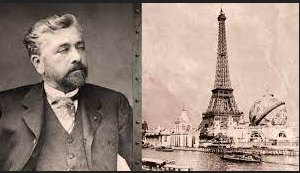 For forty-nine years, the metal colossus was the world’s tallest structure until the erection of the Chrysler Building in New York, and untold millions have paid homage. On the opening day of the Exposition, Thomas Edison wowed with his phonograph, Buffalo Bill entertained with his Wild West show, the polygamous King of Sengal tried to buy sharp-shooter Annie Oakley for 100,000 francs. One could tour the grounds by rickshaw or railroad. Above it all, literally, was Gustave who entertained royals and celebrities from his apartment in the tower of his iron lady. For creating France’s crown jewel, the government bestowed on Gustave the Légion d’Honneur. The Eiffel Tower’s darkest day occurred during the German Occupation when Nazi soldiers affixed a swastika to the top of the tower as an elated Hitler looked on.

Eiffel passed away at age ninety-one while listening to Beethoven’s Fifth symphony. Perhaps the engineer tried to immortalize Adrienne in his tower as the wordsmith did his Dark Lady. As Shakespeare wrote in Sonnet 18, “So long as men can breathe or eyes can see/So long lives this, and this gives life to thee.”