Although one of the world’s best-known books, no one has read it from cover to cover; it is the only place where success comes before work; its ending is predictable. The man whose name graces the American dictionary: Noah Webster.

Noah, the forgotten founding father, was born in 1758 in West Hartford, Connecticut. On his paternal side, Noah’s great-great-grandfather had served as a Connecticut governor; his maternal ancestor included William Bradford of the Plymouth Colony. A veteran of the French and Indian Wars, his father mortgaged his farm to send Noah to Yale. While at university, Noah marched with other Hartford men to join the Revolutionary fight at Saratoga, New York. Although arriving after the battle, the experience ingrained in him patriotic fervor. His graduation gift was an eight-dollar Continental bill. 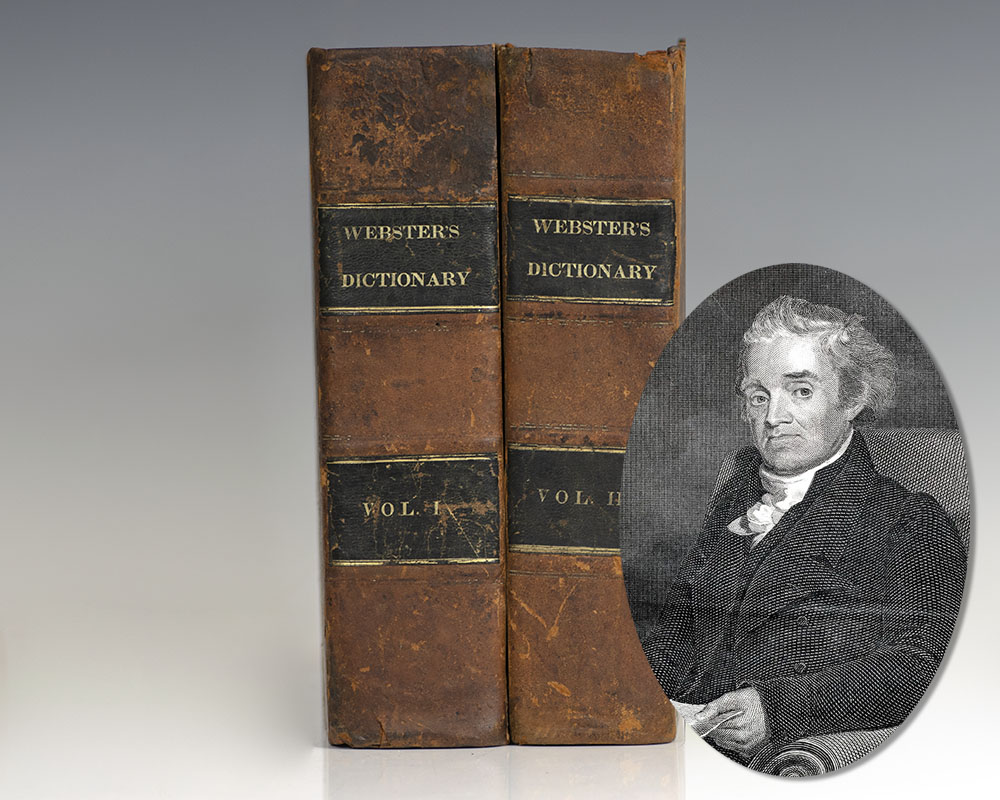 Working as a schoolteacher, Noah’s goal was to “delight and allure” students by providing relevant materials as opposed to the era’s trend of force-feeding facts to regurgitate. Hampering his pedagogy were grammar books that taught American children to speak the King’s English. The books promulgated the correct verb forms for thou such as thou goest and thou wilt. Noah felt the need to reform English to reflect the way his countrymen spoke. He believed linguistic unity would result in political unity. His contention was that a more thorough break with the former Motherland was a must, “For America in her infancy to adopt the present maxims of the old world would be to stamp the wrinkle of decrepit age upon the bloom of youth.” While a brilliant linguist, Noah did not leave a great impression on the ladies. Nineteen-year-old Juliana Smith wrote, “In conversation he is even duller than in writing, if that is possible.” But she added, “But he is a painstaking man. Papa says he will make his mark.” However, Boston-born Rebecca Greenleaf found him appealing; they married in 1789 and had eight children. Nine years later the Websters moved to New Haven where they purchased Benedict Arnold’s former home. Not one to camouflage his principles, at age twenty-seven, Noah criticized George Washington at a dinner party for recruiting a tutor from Scotland for his stepchildren, rather than hiring an American. Another reason behind his domesticating English was because the United States in that era was a contemporary Tower of Babel as different regional dialects made national communication difficult. His 1828 American Dictionary of the English Language eschewed British spelling such as flavour, musick, and honour. The result was Americans tossed the British Samuel Johnson’s Dictionary of the English Language aside in favor of Webster’s. By including quotations from Benjamin Franklin and other homeland authors into his definitions, Noah showed that national icons could hold their own against classic British writers such as John Milton. Supporters such as George Washington and Benjamin Franklin contributed to the dictionary’s popularity. One detractor was the future president John Quincy Adams who was incensed at the inclusion of “local vulgarisms.” Other of the lexicographer’s passions were the adoption of copyright laws, worker’s compensation insurance, universal education, and the gradual abolishment of slavery. At George Washington’s urging, Noah became the editor of American Minerva, New York’s first daily newspaper, and co-founded Amherst College. Four years after Noah’s passing, George and Charles Merriam published Merriam Webster’s Dictionary.

Noah’s adoption of trending words fits into the contemporary mindset. Anyone can submit a new term to Urban Dictionary such as the introduction of on fleek. And to those who believe that English should bear allegiance to the past, Noah no doubt would have tweeted, Bye Felicia.