Where the Angels can Tread: Lucretia Mott: (Part One)

Founding Father Benjamin Franklin wrote, “Clothes advertise the man.” His argument was that garments, like eyes, provide windows into the soul. Hence, apparel sheds light into pivotal moments in history and the architects behind the events. A top hat with a black band-the latter a tribute to the memory of his son- evokes a presidential assassination; a misshapen shoe recalls a life lost at Auschwitz; a purple robe trimmed with white ermine summons Queen Elizabeth’s coronation, a black leather jacket conjures the image of the Fonz. 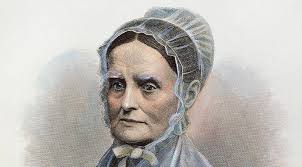 A bonnet is traditionally associated with female modesty; however, Lucretia’s Mott’s head-covering is laden with symbolism. For Ms. Mott, equality was her birthright. Lucretia Coffin was born in 1793 on Nantucket Island to Quakers whose religion advocated egalitarianism. She learned the limits to the tenet when, as a teacher, she received half the salary of her male colleagues, including her future husband, James Mott, who she married at age seventeen. She wrote, “The injustice of this was so apparent, that I early resolved to claim for my sex all that an impartial Creator had bestowed.”

The Motts moved to Philadelphia where Lucretia became a minister and founded her own women-led, interracial, antislavery organization. Her views were considered so radical most churches did not loan her rooms to hold her meetings. She viewed the abolitionist and the suffragette movement as kindred crusades, a tenet she espoused when she was the keynote speaker at the first Women’s Rights Convention in Seneca Falls.

However, while the vote was the pivotal point of the rally, Mott said she would never cast a ballot; she claimed she wanted no part of a government-sanctioned election that espoused slavery. With the advent of the Civil War, Mott decried President Lincoln as a “miserable compromiser” over his reluctance to emancipate the slaves in the Southern states. In contrast, the Mott house was a station on the Underground Railroad.

Mary was never willing to sacrifice racial equality for women’s rights, even though her stance threated her family’s livelihood. James had become a successful cotton merchant, thereby able to support his wife and five children, when Lucretia convinced him to swap cotton for wool, a textile not produced from slave labor. Hence, her ever present Quaker bonnet was a handsewn green silk, not made by the sweat of forced labor.  The head-covering now resides in the National Museum of American History, a symbol of a fiery radical who fought against the disenfranchisement of women, blacks, and Native Americans. The price she paid was angry mobs attended her speeches and marched at her home. The most famous white woman abolitionist stated, “I do not want to show my faith by my words, or by my Quaker bonnet. I want that we may all show our faith by our works.”

If Lucretia’s bonnet could speak, it would tell a tale of a friend to those who had dire need of solidarity, a testimony to the power of one to make the world a place where the angels can tread.