“All children, except one, grow up.” Peter Pan dwells in a magical world inhabited by Tinker Bell, Wendy, and Tiger Lily. Yet Neverland, like the moon, had a dark side, one the nonfictional Peter understood all too well.

For the past century, Peter Pan has appeared on international stages in animated and live action Disney productions. He even entered the ranks of Greek tragedy-along with Oedipus and Electra-via his association with a psychological disorder. Author James M. Barrie also left his imprint when he introduced a new feminine name. A young fan had christened Barrie “my Friendy,” but as she pronounced it “my Wendy,” he chose it for his protagonist.

The Peter Pan phenomena had its origin with a lost boy from the Scottish Highlands. James was the ninth of ten children born to an impoverished family. Tragedy descended when his older brother David, his mother’s favorite, died in a skating accident. Her consolation was David would forever retain his childhood innocence. 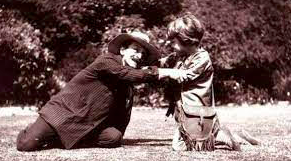 James had a high-pitched voice, five-foot stature, and described himself as “thin as a pencil but not so long.”  In a nod to karmic compensation, he became an in-demand writer who befriended the Victorian literary lights: Robert Louis Stevenson, H. G. Wells, and Henry James. His marriage with actress Mary Ansell dissolved; she claimed it had never been consummated.

In 1892, in Kensington Gardens, James met the sons of Sylvia (aunt of author Daphne du Maurier) and Arthur Llewelyn Davies. The author’s fanciful tales of coral islands and castaways turned the park into a fairyland- one in which baby Peter could fly- and he became the adored Uncle Jim. He lavished on his adopted family luxuries they could not afford such as fabulous holidays abroad. Sylvia was captivated; Arthur, emasculated. The imagined adventures became Peter Pan, dedicated to his muses: “I made Peter Pan by rubbing the five of you violently together, as savages with two sticks produce a flame.” Fame and fortune followed; three-year-old Princess Margaret said of the author, “He is my greatest friend and I am his greatest friend.” The novel delighted millions, but the fairy dust was not shared by its literary namesake.

Arthur succumbed to cancer at age forty-four, and Sylvia passed away from the same disease three years later. She left a hand-written will requesting that Jenny, the sister of the boys’ nanny, assume guardianship for her sons; allegedly, Barrie doctored the name Jenny to Jimmy. While some view the author as a godfather to the orphaned boys, others claim he subjected them to the dark underbelly of Neverland. The precursor to Peter Pan, The Little White Bird contains an erotic passage with a character named David that he delightedly disrobed. Another indication Barrie might have possessed cloven hoofs are suggestive photographs.

There was no happily ever after for the Llewelyn Davies brothers. George perished on the Western Front in World War I. Michael, (the model for the bronze statue of Peter Pan in Kensington Gardens), drowned in an Oxford lake in an apparent suicide pact with his homosexual lover. Jack died from lung disease. Before diving under a Tube train at Sloane Station, Peter burned all the letters from Uncle Jimmy to Michael claiming “They were too much.”  He recalled, “What’s in a name! My God, what isn’t? If that boy so fatally committed to an arrestation of his development, had only been George, or Jack, or Michael, what miseries would have been spared me.” Peter never escaped what he called “that terrible masterpiece.”

Hovering over the man from the Highlands is the shadow of whether he was paternal or predatory. Perhaps a clue lies in the fact that Barrie and his arch-villain, Captain Hook, share the name James. Barrie wrote of the pirate what could serve as his own epitaph, “O man unfathomable.”