The image of a boy and his animal companions serves as a magic carpet that transports us to the lost land of childhood. Christopher Robin and Winnie the Pooh, (“the bear of very little brain”), spend adventure-filled days exploring the 100 Acre Wood where nothing ever happens that a pot of honey could not make right. Yet, lurking in the shadows were specters that dogged the non-fictional hero of the childhood classic.

The British author, Alan Alexander Milne, fought on the Western Front in World War I, where the horror of the trenches left him “shell-shocked.” In search of ever elusive peace, he bought a vacation home, Crotchford Farm, in East Sussex, on the outskirts of Ashwood Forest, that he shared with his wife, Dorothy de Sélincourt, and their only child, Christopher Robin. His son’s nickname was Billie Moon that originated from what his parents initially wanted to call him and his own first attempt to pronounce Milne.  Alan admitted he and his wife had hoped for a daughter, “We did rather want a Rosemary.” For his first birthday, Dorothy gave Christopher Robin an Alpha Farnell teddy bear christened Edward from the upscale department store Harrod’s; Eeyore arrived at Christmas, followed by Piglet. At the London Zoo, Christopher Robin became enraptured by a Canadian bear, Winnipeg; difficult to pronounce, he shorted it to Winnie. In the animal’s honor, he rechristened his stuffed animal and added Pooh after a pet swan that lived on the grounds of his home, (when the swan refused to come for his offering of food, Christopher uttered “Pooh!” to show he did not care). 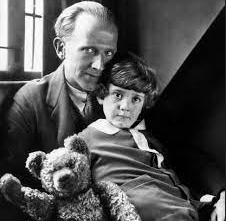 During a rain-filled vacation in Wales, Alan wrote the poem, “Vespers,” “Hush, hush, whisper who dares?/Christopher Robin is saying his prayers.” Dorothy sent it to Vanity Fair and its publication led to “When We Were Very Young,” that included the dedication: “To Billie Moon.” Literary immortality arrived with Winnie the Pooh that brought fame and fortune. Parents magazine named Christopher Robin Milne one of the most famous children in the world, along with Princess Elizabeth of York, Yehudi Menuhin, and Jackie Coogan.

Trouble arrived when Christopher Robin left for Boxgrove boarding school and became the target of intense bullying, partially inspired by his stutter. A student had a gramophone recording of “Vespers,” and it became the equivalent of “kick him downstairs.” Christopher Robin got hold of the offending record, smashed it into a hundred fragments, and scattered it over a field. In his memoir, The Enchanted Places, Christopher wrote, “It seemed to me that my father had got to where he was by climbing upon my infant shoulders, that he had filched from me my good name and had left me with nothing but the empty fame of being his son.”

His studies at Cambridge University were curtailed due to World War II where Christopher ventured far from the Hundred Acre Wood: Iraq, Egypt, and Italy. What helped soothe his soul was his marriage to Lesley de Sélincourt, though it furthered the chasm with his parents. Lesley was his first cousin, and Dorothy, who had not spoken to her brother Aubrey in thirty years, was incensed. Christopher and Lesley moved to Dartmouth where they opened the Harbour Bookshop. A source of frustration was when Winnie-mad children begged for an autograph. Their only child, Claire, suffered from cerebral palsy that left her confined to a wheelchair.

In his father’s final years, Christopher rarely visited; after his father's passing, he only saw his mother once in fifteen years. Nevertheless, Dorothy willed him the rights to the books and the multi-million Disney juggernaut. He took the money, explaining, “I had to accept it, for Claire’s sake.”

The fictional Christopher Robin once beseeched his beloved friend, “Pooh, whatever happens, you will understand, won’t you?” Ultimately, Christopher forgave and was able to relive the magical years exploring the enchanted forest.