“The wrong place at the wrong time,” is a phrase with which many can relate, but likely not to the extent of the woman immortalized in the iconic Kent State photograph. The black-and-white image made a teenager the most famous unknown person of a turbulent time.

In 2020, as Mary Ann Vecchio watched the video of George Floyd’s last moments, she felt herself tumbling down into the rabbit hole of a half century before when she had watched as the life drained out of another man lying on the ground. She said the photograph that captured the moment had “hijacked her life.”

As a hippie kid growing up in Opa-locka, Florida, Mary Ann believed in the magic of rainbows. What dampened her optimism was when her working-class parents, with five children to support, fought, a warning for their kids to disperse. Nearby Miami Beach served as Mary Ann’s refuge where she smoked pot. The local police warned if she ever played hooky again she would end up in jail. The fourteen-year-old Mary Ann took off, desperate to be any place other than Opa-locka. Hitch-hiking across the country, Mary Ann slept in fields, shelters, and worked odd jobs to earn money for food.

The magic ended when she wandered into the campus of Kent State University in Ohio where students were protesting President Richard Nixon’s decision to invade Cambodia. Moments after she had struck up a conversation with Jeffrey Miller, the National Guard fired sixty-three shots into the crowd, killing Jeffrey and three other students. John Filo snapped a picture of Mary Ann kneeling over Jeffery’s body, upraised arms echoing her anguish. The photograph earned John the Pulitzer Prize; it earned Mary Ann a legacy of pain. 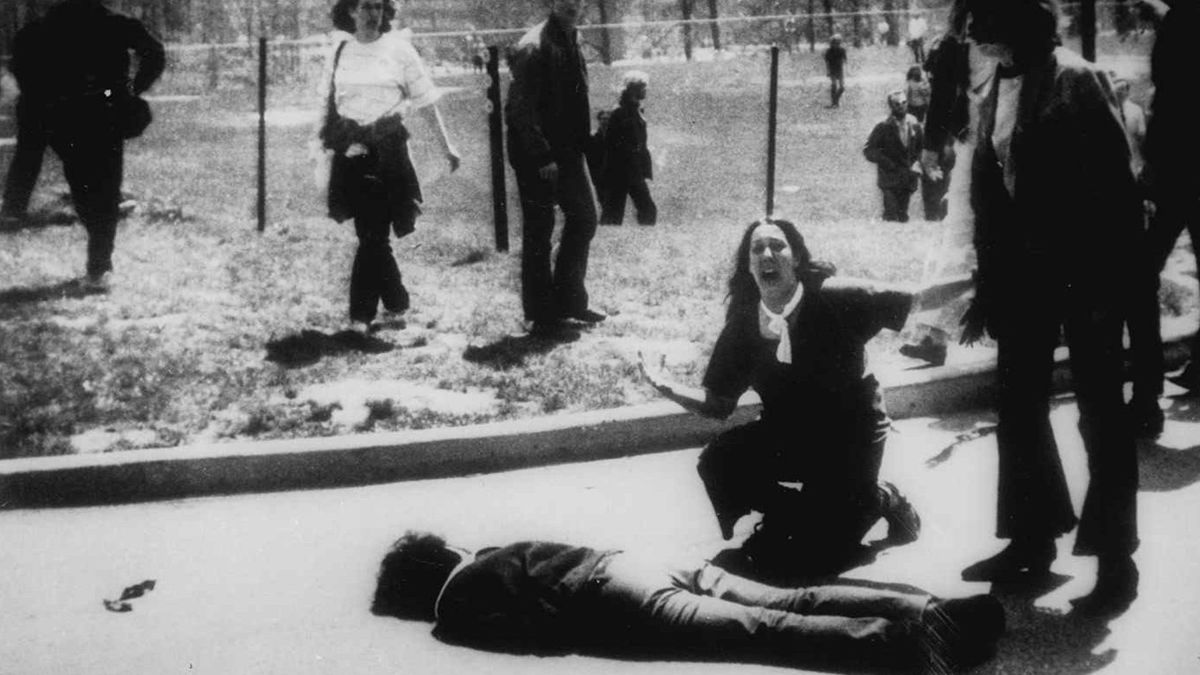 The image of the grieving girl appeared on the front pages of newspapers around the world with a caption that identified her as an anonymous co-ed. The Indianapolis Star, however, outed Mary Ann’s identity and the fact she was a fourteen-year-old runaway living in a hippie colony.  The article alerted Frank Vecchio as to his daughter’s whereabouts in Indianapolis, and he arranged for her return to Florida. Rather than receive counselling for her year on the streets, a witness to murder, and the notoriety from the media, Mary Ann became a target of animosity. Her family received mail calling her a drug addict and a tramp. Claude Kirk, the governor of Florida, claimed she was “part of a nationally organized conspiracy of professional agitators.” Of those days she recalled, “I was a mess, like I was trying to punch my way out of a paper bag.” After her arrest for loitering and marijuana possession, Mary Ann ended up in a juvenile facility. Paranoid after adverse publicity, she felt the police were hounding her.

Mary Ann married Joe Gillum, a plumber from Kentucky, took his surname, and found a job in a Las Vegas casino coffee shop. The marriage produced no children and ended in divorce. Yet, nothing life throws at Mary Ann dampens her spirit. As she stated, “I’m still that hippie kid who always sees a rainbow.” She has also come to peace with the event that impacted her life, stating that “it was my destiny that I go there.” Currently, Mary Ann lives close to Opa-locka where she leaves gifts at the local Walmart parking lot for needy strangers.

In contrast to her detractors, many felt the photograph that garnered Mary Ann more than her fifteen minutes of Warhol fame was a social document whose horror hastened the demise of the Vietnam War. Because it showcased a woman grieving an unspeakable loss, the picture is identified with the title The Kent State Pietà.