In 1972, Sammy Davis Jr. crooned, “The Candy Man makes everything he bakes/ Satisfying and delicious.” Although millions delight in the endorphin-producing chocolate, many are unaware of the story of the real-life Willie Wonka.

If you are a fan of Reese’s Peanut Butter, Jolly Ranchers, or Kit Kat, you can thank the original candy man, Milton S. Hershey, born in 1857 in Lancaster, Pennsylvania. His father, Henry, had grandiose dreams but little money, and his wife, Fanny, milked her neighbor’s cows after their udders had been emptied to obtain any left-over drops. When Milton was five, the Battle of Gettysburg raged a few miles from his home. As a precaution, the child buried his hoarded pennies earmarked to buy candy. The war bypassed the old stone farmhouse, but tragedy did not: Milton’s younger sister, Serena, passed away, and his parents separated due to Henry’s inability to earn a living. School ended at age twelve, and Milton found work at a sweet shop where he learned to make candy. With financial aid from his maternal aunt, Milton opened confectionary stores in Philadelphia and New York, both of which failed.

Success arrived in his hometown where he started the Lancaster Caramel Company that led to 1,400 workers and a burgeoning bank account. Romantic happiness followed when Milton met Catherine “Kitty” Sweeney, a salesgirl in a candy store in Jamestown, New York. Despite their age difference-he was forty and she was twenty-five-and the fact he was Mennonite, and she was Catholic, they married in St. Patrick’s Cathedral in New York City. 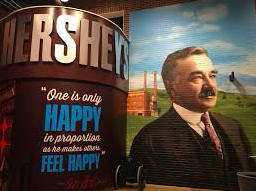 Immortality stepped in at the 1893 World’s Columbian Exposition in Chicago where the German Stollwerck Brothers displayed their chocolate making machine. With the mindset of “in chocolate I trust,” Milton purchased their equipment, and with the sale of his caramel company that netted $1,000,000, he established the Hershey Chocolate Company. The chocolate bar-the first to come in that shape- came with a Hershey stamp on every square. Its inexpensive price helped it weather the Depression, and during World War II, the military shipped millions to soldiers overseas.

Unlike the robber barons of the time-Rockefeller, Morgan, Carnegie-Milton erected a utopian village for his workforce that included white picket houses, and an amusement park that held a carousel with sixty-six hand-carved wooden horses. When customers unwrapped the five cent Hershey bar, they discovered a postcard that mythologized Lancaster replete with swimming-pools, gardens, and tree-lined streets. In 1906, the town name changed to Hershey. The following year Milton introduced Hershey Kisses; currently, the company turns out 20 to 25 million Kisses a day. Milton, a benevolent tyrant, suppressed unions, controlled wages, and fired those who angered him.

The Hersheys were devoted to one another and lived in a twenty-room white mansion, (currently the company’s headquarters.) The couple booked a passage on the Titanic but cancelled when Kitty took ill. Childless, they established the Milton Hershey School for orphan boys whose trust is now valued in the billions. Milton was bereft at his wife’s passing at age forty-four, and forever carried her picture in his pocket.

The town built on chocolate welcomes more visitors than the White House. Tourists are drawn to streetlamps shaped like Hershey kisses, air heady with the scent of cocoa. In the giant rotunda of the Milton Hershey School stands a bronze statue of its founder, arm around a young boy. On its pedestal is the inscription: His deeds are his monument. Perhaps a more apt metaphor for Hershey’s life is his eponymous bars-a mixture of the bitter and the sweet.