Prior to the year Orwell was made infamous with his dystopian novel, bees sweetened our tea, provided the lead singer of the Police with his name, were part of “the talk” that explained how babies originated. A new dimension to the pollen perpetrator arrived with the elderly recluse whose grizzled visage appears on all Burt Bees’ honey-hued packaging.

The saying, “The times make the man,” proved spectacularly true for Ingram Berg Shavitz, the quintessential product of the hippie era, an unlikely beeswax baron. He was born into a Jewish family in Manhattan; on a childhood vacation to Maine, Burt, who changed his name after high school, said of the state, “It was like the Garden of Eden.”

College in Delaware ended when the army drafted Burt and stationed him in a base in Germany. Upon his return, he eschewed corporate America as he felt a necktie the equivalent of a noose. By the mid-1960s, Burt had become a photojournalist in New York City where he snapped pictures of black power rallies, the first Earth Day, John F. Kennedy, Malcolm X, and Allan Ginsberg. In 1970, he left his squalid $30.00 a month apartment and drove his Volkswagen to Maine. He stumbled upon a beehive swarming around a fencepost after a rainstorm, an event that Burt credited to the Almighty. He said of his business of selling honey to the locals, “There was no company. The bees were the company, my truck was the company.”

In 1984, Burt was driving his yellow Datsun when he picked up Roxanne Quimby, a waitress and single mother of two, as she was hitch-hiking from her cabin near Lake Wassookeag to the local post office. They became lovers; Burt later recalled, “She was man-hungry, and she and I, by spells, fed the hunger.” The hippy duo formed a partnership: Burt had the bees while Roxanne had the business brains. She recycled leftover beeswax into candles and, with knowledge gleaned from a 19th century farmer’s almanac, combined the wax with almond oil to create a lip balm and body lotions. In their first year, using only natural products that Burt said had been around since Cleopatra, they incorporated their enterprise. Burt’s Bees’ logo depicted Burt with his trademark signature striped locomotive engineer’s cap. Before long, honey had spun into gold; what had been a $3,000 a year subsistence business had transformed into a multimillion-dollar purveyor of eco-friendly products packaged in yellow containers.  Roxanne, who had transitioned from hippie to bourgeoisie, relocated the company to North Carolina to take advantage of lower taxes and a larger labor pool. Burt was upset at both leaving his Eden and by membership in corporate America. The house of honey became even less sweet when Burt embarked on an affair with a young woman who worked in one of their stores. Mr. Shavitz claimed an enraged Roxanne forced him out of the business. Their bitter estrangement carried a sting that even their salves could not make smooth. Ms. Quimby bought his one-third share for $130,000. Shavitz retreated to Maine and lived in a 400 square foot converted turkey coop without plumbing, television, or water heater. 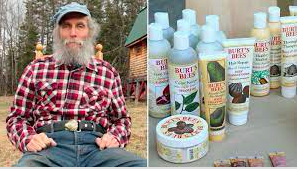 In 2004, Quimby sold most of her company to AA Investors for a reported $173 million; she claimed she gave her former common-law husband $4 million. The Clorox Corporation acquired Burt Bees in 1997 for $925 million. Burt felt he was the biblical Esau who had sold his birthright for “a mess of pottage.”  However, the 20th century Thoreau refused to let bitterness erode his Eden. He stated, “I had no desire to be an upward- mobile rising yuppie with a trophy wife, a trophy home, a trophy car.” He was content in his home where he lived with his three golden retrievers, wildlife, and stunning sunsets. Burt enjoyed his role as paid mascot for Burt’s Bes though he was miffed at a clause, “I’m contractually obligated not to say ‘Buzz off.’”