There are fascinating facts about Maryland. Harriet Tubman was born on one of its plantations that became a station on the Underground Railroad. Native Francis Scott Key, (ancestor of F. Scott Fitzgerald from whom he received his first and middle name), penned “The Star-Spangled Banner.” The state’s baseball team, the Ravens, stems from Edgar Allan Poe’s poem. And a king christened Maryland after Queen Henrietta Maria, known as Queen Mary.

The daughter of Henry IV of France and Navarre, the king who bagged the crown by stating,  “Paris was worth a mass,” was the first monarch of the Bourbon line. When his daughter was six months old, Henry met his end through assassination. Her mother was the Italian Marie de’ Medici. The couple married by proxy in 1626 at Notre Dame Cathedral, while the ceremony took place a month later in England. The 4’10”, fifteen-year-old bride’s pale blue velvet train was so heavy a man walked beneath to shoulder the weight. When the Bourbon princess married the Stuart king, England branded her “the Flemish whore” and feared she would tempt her husband from their Protestant religion. Due to her Catholicism, Henrietta Maria did not have a coronation. The queen kept busy by buying paintings by Rubens, dancing at masques, and spending time with Jeffrey Hudson, her court dwarf. Their marriage produced nine children. 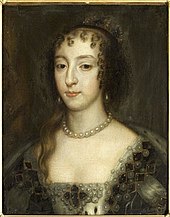 The royal couple also became involved with the New World when Lord Baltimore appealed to Charles for a royal charter to found an overseas colony that eventually became a Catholic refuge. As Charles already had places that bore his name such as North and South Carolina, from the Latin for Charles, Carolus, and Charleston, he christened it Terra Mariae, Maryland, the anglicized version of Henrietta Maria.

The idylls of the king and his queen came with an expiration date. Two decades after their nuptials, the British Isles erupted in a civil war between the royalists and Oliver Cromwell, dedicated to ending the monarchy. When the war forced them to part at Dover, as her ship The Lion sailed away for safety to the Continent. King Charles galloped along the White Cliffs, waving until the vessel disappeared into the horizon. The queen travelled to the Continent to raise funds and pawned treasures such as the Three Brothers, a crown jewel. The following year she returned and became the focus of attack by enemies of the crown. She wrote Charles, “The balls were whistling upon me and you may easily believe I love not such music.” The self-styled “Generalissima” was also a warrior queen, with Jeffrey always at her side. In 1645, after the Royalist defeat at Naseby, the couple’s enemies discovered letters between Charles and Henrietta Marie. The king’s letters to his wife opened, “My dear harte.” The parliamentarians published them to prove the queen was “the true controller of the breeches.” Regarded as the Stuart Lady Macbeth, few consorts better exposed the lie that women were “the weaker sex.”

When Cromwell proved victor, he ordered the king’s beheading on a public scaffold outside the Banqueting House at Whitehall. On Charles’ walk to his martyrdom-as he viewed his death-he passed under the ceiling painted by Rubens. The toll of his death and the war left the queen, then residing in France, in a state of devastation. She assuaged her grief with the vision of her son’s birthright: the restoration of his father’s throne.

Although Charles had left Henrietta Maria bereft of fortune, crown, and spouse, his love had bequeathed her a namesake-Maryland-a place upon which she never stepped foot. In “Sonnet 18,” William Shakespeare expressed the concept of immortality born of love, “So long as men can breathe or eyes can see/So long lives this, and this gives life to thee.”