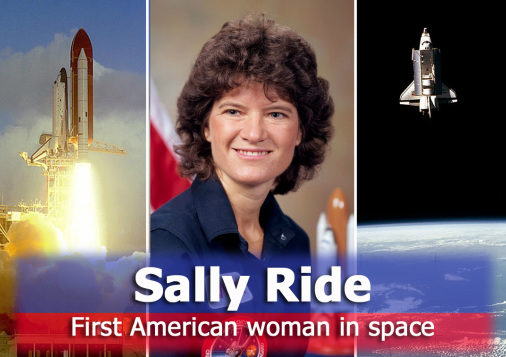 The men who heeded the siren call of the sky are legendary: Shepard, Glenn, Armstrong, Aldrin. Then came Sally Ride, who blazed a cosmic trail when she became the first woman astronaut and shattered the glass dome of the galaxy.

The trajectory of Sally’s life changed when, at Stanford, she answered a college newspaper advertisement for a position at NASA. She beat out 8,370 applicants thereby infiltrating a solidly entrenched boys’ club.

Ms. Ride, an astronaut and physicist, reluctantly served as an idol of feminist strength, and  made history when she orbited the Earth aboard the aptly named space shuttle the Challenger.  She later recalled of her historical mission, “The most fun that I’ll ever have in my life.” When the astronauts took off, a crowd of 250,000 (including Gloria Steinem and Jane Fonda) watched the launch, many singing the words from the Mack Rice song “Mustang Sally.” Ms. Ride donated her first flight suit to the Smithsonian where it hangs inside a mock-up of a space shuttle. The light-blue jacket bears a name tag, “Sally.” Upon retirement, she wrote science books for children; she signed them, “Reach for the stars.”

In an obituary on her website, Sally outed herself as a lesbian for the first time, naming her partner of twenty-seven years as Tam O’Shaughnessy, thereby becoming a posthumous gay rights activist. A fitting epitaph to the trailblazer could be a lyric from the Rice song, “Ride Sally Ride.”

~ Excerpted from Fabulous Female Firsts: Because of Them We Can