A tongue twister popularized in the 2010 film, The King’s Speech, “I have a sieve full of sifted thistles and a sieve full of unsifted thistles, because I am a thistle sifter.” A century earlier, a popular tongue-twister was, “She sells seashells by the seashore.” While most assume ‘she’ was merely an anonymous pronoun, it refers to Mary Anning.

Jane Austen, in her novel, Persuasion, portrayed the women who lived in the 19th century coastal community of Lyme Regis, Dorset, as preoccupied with revealing their cleavage to rich men in britches in order to ensnare a husband. In contrast, their non-fictional contemporary pursued a far different prize. 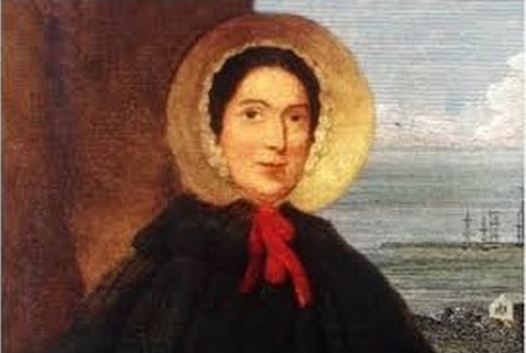 With the same passion that Indiana Jones searched for the Ark of the Covenant, Mary Anning was on a pilgrimage for fossils from the Jurassic era. Born in 1799, Mary caught the paleontology bug from her father, Richard, a cabinet maker who sold fossils-that he referred to as curiosities- to summer tourists. She never had the remotest interest in following in her mother’s, Mary, footsteps to work as a lace-maker. Of the ten Anning children, only Mary and one brother survived.

The Dorset village was ideal for the dedicated fossil hunter; two hundred million years ago, the sea covered the area and left behind the fossilized bodies of huge reptiles. While most of us are thrilled to find a four-leaf clover, the twelve-year-old Mary unearthed the remains of a sixteen-foot fossil sea monster, Ichthyosaurus, the first extinct creature discovered. Other of her geological gems: an almost extant Plesiosaurus and the first skeleton of a Pterodactyl. The price of her endeavors was steep: in 1833, a landslide injured her and took the life of Tray, her faithful canine companion.

Out of necessity, Mary was also an entrepreneur who sold her finds in Lynne Regis. Souvenir hunters and the local villagers were intrigued with the woman who defied classification. She was low on the social hierarchy: uneducated, poor, and a religious dissenter. Despite her outsider status, Mary garnered attention in an era when gentlemen ruled the geological roost. She sold her unique finds to such men, who then bequeathed the artifacts to institutions such as the Natural History Museum. In a letter to one of her admirers she apologized for not including a sketch of her find, “My eyes are so inflamed with picking at the fossil that I could not see to draw.” The removal of 200 million years of dirt from a humongous fossil was a formidable task. Although the Geological Society of London was aware of her findings, it did not permit membership. Compensation was also not forthcoming. A contemporary wrote, “Men have sucked her brains while she derived none of the advantages.”

Mary, who never married, spent her where she had been born; a small government grant from the Prime Minister, Lord Melbourne, financed her fossil shop.  As her reputation grew, men who published scientific journals started to seek her expertise. Although they picked her brain, they gave her no credit. After all, she was a woman trespassing on a man’s domain. Moreover, her lowly station made her unsuitable for a field that was the provenance of the rich.

The pioneer paleontologist passed away in 1847 from breast cancer, followed by posthumous accolades. Charles Dickens wrote of her contribution to geology, “It was not a science when she began to discover, and so she helped to make it one.” Although associated with a tongue twister, the paleontologist could be described by the woman in the nursery rhyme, “Mary, Mary, Quite Contrary.”