A slice of Americana is the Wendy’s hamburger emporium with its mascot of a red-haired girl, pigtails bound with blue bows. Behind the fresh-faced child lies a Horatio Algier's story.

The fast-food chain originated as a twinkle in the eye of Dave Thomas, born in 1932 in Atlantic City, New Jersey, to an unmarried mother. Rex and Auleva Thomas, from Kalamazoo, Michigan, adopted the six-week-old baby. Auleva, passed away when Dave was five from rheumatic fever, and he lost two stepmothers before age ten. Rex travelled from city to city searching for jobs, and home was dilapidated trailers. Rex and Dave ate meals at diners, and, as his distant father did not care to converse, Dave watched the working of the restaurant. Dave’s dream was to open his own business that would serve his favorite food. He quipped, “Popeye wasn’t my hero. Wimpy was, because he loved hamburgers.” His only close relative, his maternal grandmother, gave him the advice, “Don’t cut corners.”

His high school education ended in the tenth grade, and after military service in Germany, Dave managed four floundering Kentucky Fried Chicken outlets with the promise that if he turned them around, he would receive a 45 percent ownership. The arrangement resulted in meeting Colonel Harlan Sanders, and, after he sold his stake in KFC, Dave pocketed $1.5 million. Equipped with the funds and his vision, (his hamburgers would be square, a nod to his grandmother’s words “to never cut corners”), Dave launched his restaurant in Columbus, Ohio. All he needed before he opened its doors was a name and a figurehead, a lesson he had learned from the Colonel.

For the christening of his enterprise, Dave thought of his five children’s names, “but calling it Pam’s or Kenney’s or Molly’s or Melinda’s or Lori’s didn’t have the right ring.” He then landed on his daughter’s Melinda Lou’s nickname that had originated when her siblings, unable to pronounce her name, called her Wanda, that turned into Wendy. 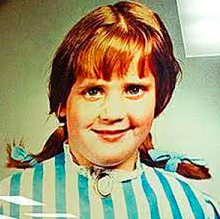 Dad instructed his eight-year-old daughter to put her hair in pigtails-supported with pipe-cleaners; after he took her picture, he declared he had the image for Wendy’s Old Fashioned Hamburgers. The original caption was, “Quality is our recipe;” currently, her ruffled collar spells out the word “mom.” His aspiration was to eventually own five eateries so each of his children would have a secure future; today there are 6,000 Wendy’s. A wildly successful advertising campaign featured the octogenarian Clara Peller who asked, “Where’s the beef?” a dig against competitors’ smaller patties.

Dave admitted that he was not a perfect father and explained it was because he never had a role model. His son stated, “He doesn’t seem to know how to be with us. For him, home is a nice place to visit, but he doesn’t want to live here.” Shortly before Dave’s passing at age sixty-nine, he told Wendy he wished he had not named his restaurant after her as that had placed undue pressure on her. Wendy quipped that serving as the mascot helped when she needed a reservation. Another reason to be at peace with her association to the franchise is it made her the possessor of a $100, 000,000 fortune, a net worth not many could have a beef with. Rather than relying on her Midas father, Wendy graduated from the University of Florida with a degree in consumer behaviorism. She is married to Paul Morse and has a daughter McKenzie.

Dave regretted not finishing high school, and in 1983, he passed the G.E.D. exam. Coconut Creek High School in Fort Lauderdale made Thomas a member of its senior class, and he and his wife Lorraine were king and queen of the senior prom. He was voted, “Most Likely to Succeed.”