In yesteryear, children who heard the name McDonald sang along to the rhyme about an old man on a farm. Post 1950s, the connotation was of Happy Meals, playgrounds, and a ketchup-haired clown. The chain’s golden arches form the letter M- (and, subliminally, a woman’s breasts,) after the company’s founders, Richard, (Dick,) and Maurice, (Mac,) McDonald.

The seductive commercial jingle, “You deserve a break today,” had its genesis in rural New Hampshire where Dick and Mac were born to Scottish immigrants. The boys desired a better lifestyle than their father, Patrick, could provide. Equipped with high school diplomas and the ambition to make one million dollars before they turned fifty, they headed for California.

In 1948, with the mindset of ‘if you feed them they will come,’ the McDonalds opened a small barbeque restaurant in blue-collar San Bernardino. Their eureka moment: they changed production to an assembly line dubbed the Speedee Service System. They replaced their carhops, and, in the new system, customers drove up to a service window for 15- cent hamburgers and 10-cent fries. Business skyrocketed, and the brothers earned $350,000 a year-a million in contemporary currency. Dick originated the logo of the Golden Arches-based on the M for their surname as well as a sign that displayed the number of hamburgers sold. By 1954, the brothers had sold twenty-one franchises and indulged in custom Cadillacs.

The embodiment of the American Dream, Ray Kroc, a native of Oak Park, Chicago, was born in 1902, the son of an unsuccessful real estate agent who had emigrated from Bohemia, (current-day Czechoslovakia.) A high school dropout, he was a travelling milkshake-machine salesman who hawked his wares in the Midwest. After a restaurant purchased eight of the machines, taken by the size of the order, Ray drove halfway across the country to San Bernardino to investigate. Sensing a golden goose hidden in the golden arches, Ray persuaded the brothers to hire him as a franchise manager in exchange for 1.9 percent royalties. 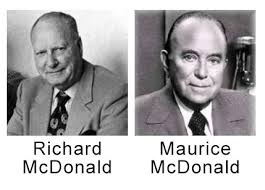 In 1955, Ray opened his own McDonald’s and, in 1961, through a series of legal maneuvers and $2.7 million buyout, he maneuvered the brothers out of their burgers and their name. He explained, “What are you going to do with a name like Kroc?” The brothers insisted on keeping their flagship restaurant they called the big M; in retaliation, Ray opened one close by. Ray boasted, “I ran ‘em out of business.” Another backstab came when Ray published his autobiography, Grinding It Out, where he claimed that the chain had been his brainchild. Until the time he had sold the business, Dick claimed he had never heard Ray mention he was the founder, “If we had heard about it, he would be back selling milkshake machines.” A further indignity was the McDonalds claimed Ray had cheated them out of future royalties that would have led to hundreds of millions of dollars.

After selling his birthright for a mess of pottage, Dick moved back to New Hampshire. He saw how anger had driven his brother to an early death and he forced himself to move on. He spent his years in a modest house, one far different that Ray’s McMansion in Rancho Santa Fe, California. He rationalized that if he had stayed on in the business, “I would have wound up in some skyscraper somewhere with about four ulcers and eight tax attorneys trying to figure out how to pay all my income tax.”  However, one honor he accrued was when the 50 billionth McDonald’s hamburger was cooked in 1984, Dick, who had grilled burger No. 1, was chosen to eat it. Ray, who went on to buy the San Diego Padres-because he needed a hobby-never heeded the biblical injunction, “For what shall it profit a man if he shall gain the whole world, and lose his own soul?”