GREAT SECOND ACTS: IN PRAISE OF OLDER WOMEN Prologue: “The Best is Yet to Be” 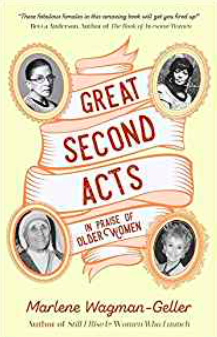 Prologue: “The Best is Yet to Be”

With the optimism of youth, there is an inherent belief that, in the words of Dorothy from The Wizard of Oz, “the dreams that you dare to dream really do come true.”  However, as the calendar pages turn, our aspirations tend to recede into the distance, placed on the back-burner by financial survival, child-rearing, male maintenance. Then, in a dizzying blur, we gasp at the pigment-free image staring back from the mirror reminding us how quickly time passes. It is essential we do not go gentle into our twilight years. Ladies who experience late in life reinvention are the embodiment of what Antony said about Cleopatra, “Age cannot wither her/Nor custom stale/Her infinite variety.”

The nineteenth-century novel was the contemporary soap opera, and Charles Dickens did a number on older gals with his depiction of Miss Havisham in his book Great Expectations. Jilted at the altar, her mansion became a mausoleum; in a decaying wedding-dress with matching white hair, she existed in perpetual mourning. Her cinematic heir, Norma Desmond, dwelt on the aptly named Sunset Boulevard. Rather than look ahead, she anxiously awaited the return of a parade that had long passed her by. Another fictional character that helped foster the stereotype of women in their later years as unable to retain their marbles was Bette Davis’ role in the movie Whatever Happened to Baby Jane? The answer to the title’s rhetorical question: she became a mad woman not confined to the attic and became the worst a lady can be in her twilight years: delusional, homicidal, sadistic. The meal she served her sister consisted of a pet bird is not one that can ever be unseen.  In contrast, the non-celluloid Bette retained her clarity and sagely remarked, “Old age is not for sissies.”

Fortunately, the long-established paradigm of we’re beyond our expiration date of achievement/sanity has received a well-deserved shakedown as women have obtained late-in-life success. After all, the rings on a trunk make for the most majestic of trees. An important idea to keep in mind and yes, we still have one- is that the golden years can be rewarding creatively, emotionally, and romantically.

Maggie Kuhn, an octogenarian who proved frail bodies can mask iron spirits, called herself a little old woman. She celebrated her forced retirement-a gesture of out with the old and in with the new-by founding the Gray Panthers, a name derived from the radical Black Panthers. In 1972 she told The New York Times, “I have gray hair, many wrinkles, and arthritis in both hands. And I celebrate my freedom from bureaucratic restraints that once held me.” Kuhn refused to be defined by the year on her birth certificate.

Another kidney-punch to time was Sue Ellen Cooper’s the Red Hat Society that proved girls just wanna have fun. Her organization is a nod to matrons who have earned their stripes- AKA wrinkles and bags. The purple hats are a variation of a Purple Heart: proof positive they have survived all life has dished out.

In China, the elderly members of the family are venerated patriarchs while in Western cultures senior citizen homes proliferate. Perhaps the finger of blame should be pointed at the German siblings Wilhelm and Johann Grimm. In their classic fairy tales, the villain was the ancient crone. She was the one whose version of hospitality was to shove Hansel and Gretel into the oven, to imprison Rapunzel in a tower, to turn into a hag to trick Snow White into eating the poisoned apple. The reason why Snow White’s stepmother replaced maternal nurturing with malice is because she was no longer the fairest in the land. Grimm indeed.

Fortunately, the world has made strides and is more accepting of its seniors. Anna Mary Robertson, forever known as Grandma Moses, was in her late 70s when arthritis made her beloved embroidery a hobby of the past, and her sister suggested she switch to painting. Her folksy canvasses of the quieter, gentler New England of her childhood sold for thousands of dollars-a princely sum in the 1930s. Presidents Harry S. Truman and John F. Kennedy lauded the little lady, and a 1950 documentary about her life received an Oscar nod. Despite the accolades, she retained her modesty. She wrote in her autobiography, “I look back on my life like a good day’s work. It was done, and I feel satisfied with it.”

Thankfully, there exists what stayed in Pandora’s Box: hope. At age 85, Supreme Court Justice Ruth Bader Ginsburg is so respected she received a street name: The Notorious R. B. G. The former head of the Federal Reserve, Chairman Janet L. Yellen, 71; and the International Monetary Fund Chief, Christine Lagarde, 62, prove ladies know more about money than how to spend it. The time to shed the garment of invisibility has arrived. Lives well-lived help shatter the mindset that older gals are either off their rocker or belong on one.

Rather than view wrinkles as a mark of shame, ladies of a certain age should embrace their lines-testimony to laughter, love, and life. They should not stress if they did not merit a mention in Forbes Under 30 or see their names on the Best-seller lists. Hope must spring eternal: there is still time to pursue dormant dreams and to wallow in the joy of proving the naysayers wrong. The lives of the ladies profiled remind anyone who shrugs off the idea of great second acts of the mantra “never say never” that the silver-haired can actualize their aspirations in their golden years.  In the words of Robert Browning, “Grow old with me/The best is yet to be/The last of life, for which the first was made…”