The television series, The Nanny, cemented the image that women from Queens have voices that can shatter glass. While the winsome Fran Fine may have reigned over the heart of Mr. Sheffield, the Noo Yawk borough from which she hailed became known as Queens after a woman cut from a far different cloth: Catherine of Braganza.

The European map is dominated by places christened after crowned heads, but it seems incongruous to name a working-class borough after a blue blood. Yet history is made of such twists and turns. In the 17th century, King Charles II of England married King John IV’s daughter, Princess Catherine from Portugal, in order to forge a political alliance. The bride’s dowry consisted of $500,000 in cash, (a king’s ransom in contemporary currency), the colonial trading posts of Tangiers, Morocco, and Bombay, the latter of which became England’s foothold in India. She also brought over loose-leaf tea, popular among the Portuguese aristocracy, the origin of the British love affair with the brew. In return, the Portuguese received military protection from Spain. 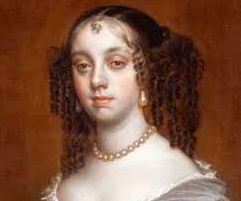 The royal hook-up made Catherine the Queen of England, Scotland, and Ireland, but it did not make her happy. Her husband could not keep his scepter in his pants, and her adopted country viewed her as the infertile Roman Catholic interloper. Her subjects accused her of trying to poison her husband in retaliation for his flotilla of mistresses that had produced fifteen illegitimate children. Their hope was their king would divorce the sterile Roman Catholic foreigner and remarry a Protestant who would birth heirs. Charles defended Catherine against her detractors who wanted to send her packing to Portugal. After Catherine became a widow, she returned to her homeland where she served as regent until her death in 1705.

Although Catherine became a forgotten footnote, her legacy lives on in the New York borough. After England gained control over what was then known as New Netherlands from the Dutch, King Charles II gifted the territory to his brother, the Duke of York, who reciprocated by calling the land Queens after his sister-in-law’s imperial status.

Three hundred years after Catherine’s passing, a Portuguese group proposed to Queens Borough President, Claire Shulman, that the Manhattan suburb erect a statue of the royal that would face the United Nations building from its pedestal on Hunters Point. The sculptor, Audrey Flack, was excited to design a memorial to a woman in a city with few female statues. The organization- that included Donald Trump who was born in a twenty-three-room manse in Queens-raised $2 million for the project. Fund-raisers included concerts, Plaza Hotel dinners, and an event that included Lipizzaner stallions flown in from Portugal.

The completed likeness of the Queen was to stand only second to the Statue of Liberty, bronzed and bejeweled. However, the organization met with the sculptor’s last name from those who felt that the queen’s likeness should not be displayed as a portion of her fortune had stemmed from the slave trade. Therefore, she did not deserve to be celebrated-eponymous title notwithstanding. Opponent Betty Dopson argued that the Jewish Claire Shulman would not accept a statue of Eva Braun just as African Americans should not accept someone affiliated with racial subjugation. Protestors wore buttons bearing the words: Slave Queen.

In the end, the Colossus of Catherine became scrap metal. The best course of action would have been for both sides to have met over a cup of tea. Then they could have discussed: WWND? What Would the Nanny Do?