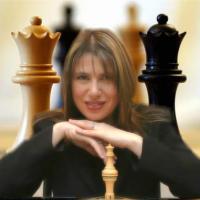 The only piece on a chessboard that symbolizes a woman is the queen-its most powerful player-able to move in any direction. Ironically, females are treated as second-class citizens in the male-dominated game. A blow to sexism arrived when Susan Polgar became the first female grandmaster of chess.

Chess was not always a male domain. In medieval Spain, women indulged in the ancient art in bed while recovering from childbirth. A French tale from 1230 relates how a knight must triumph against an emir’s chess-master daughter in order to win her hand. Around the 17th century, women disappeared from the chess scene until the advent of three sisters.

Tiger Mother Amy Chua had nothing on tiger father László Polgár, a Hungarian psychologist.  The stepson of a rabbi and the product of a broken home, László grew up in an orphanage and wanted a far more ordered life for his future children. After studying the biographies of 400 intellectuals from Einstein to Socrates, László came up with the theory that geniuses are made, not born. To espouse his hypothesis, he published Bring Up Genius! He also conducted an epistolary courtship with Klara, a Ukrainian foreign language teacher. His letters did not wax eloquent on her beauty or profess declarations of eternal love. Instead, they centered on a pedagogical experiment. In one he told her, “Miss Klara, we both agree that the school system produces the gray average mass. But give me a healthy newborn and I can make a genius.” Klara fell for him as well as his plans for their future offspring, and the two wed in 1973. László delivered on his promise, not just once, but three times with daughters Zsuzsa, Zsofia, and Judit.

Although László knew he was to “specialize” his first-born, he was unsure of the best discipline: mathematics, finance, or languages. The question was answered when Zsuzsa, (she currently uses the Anglicized Susan) the highly energetic first-born, discovered a chess set while rummaging through a cabinet in search of a toy. Klara, not familiar with a single rule of the ancient game, was delighted her daughter was quietly absorbed in the figurines and promised that her father would teach her the game. Rather than drilling his daughter in the rules, he described the pieces as characters in a fairy tale, filled with adventures of the king, queen, horses, and knights.

Chess, Polgár decided, was the perfect outlet as it was an art, a science, and, as with competitive athletics, could yield measurable results. He decided he had found his child’s calling card-despite the fact that less than one percent of the top players were women. Six months later, Zsuzsa arrived at Budapest’s smoke-filled chess club. One of the regulars guffawed when László asked him to play against a diminutive opponent; sitting on phone books and a pillow to reach the table, the little girl earned her first competitive victory. Soon afterwards, she dominated the city’s girls-under-11 tournament by achieving a perfect score. Judit, not one to stand in her sibling’s shadow, by age five was beating her father.

László had read that Yehudi Menuhin’s father had sacrificed his career to devote himself to his son’s concerts, and although it meant living in a cramped apartment and bread dipped in gravy for meals, he decided to do likewise for his daughter. Hungary’s communist regime threatened to throw Polgár into a mental institution when he refused to send his children to school. His rebuttal was he was paving the way for his girls’ destiny as the best chess players in the world and would provide home-schooling for five to eight hours a day with instruction in German, English, Esperanto, history, and chess. To show he was not an adherent of all work and no play, he claimed he would slot time for table tennis and swimming as well as a 20-minute break for jokes. Apparently, this latter activity bore fruit. For entertainment, the sisters challenged each other to blindfold matches, envisioning the moves in their minds. On one occasion, a Budapest restaurant owner invited them to perform in a local mach. Observing Judit’s smug smile when she took first place, he told her, “So you play chess well and I cook well.” She responded, “With a blindfold?” Another indulgence was junk food. László stated he was very strict about their diet, but their mother and grandmother were more permissive. Their world was consecrated to sixty-four black-and-white squares.

The government informed Polgár that he could not treat his offspring as guinea pigs; however, what helped his case was communist leader, Janos Kadar, was a chess fan. The authorities were also mollified by East Germany’s dabbling in human engineering of creating athletic champions. Most people felt that rather than creating another Bobby Fischer, he was a contemporary Dr. Frankenstein. While László orchestrated his daughters’ lives, Klara took care of the pragmatic aspects of their home, and in later years, coordinated her girls’ travels to tournaments in forty countries. She was happy to follow her husband’s lead and stated, “The thread follows the needle. I am the thread.”

The Hungarian Chess Federation wanted the girls to compete against other girls, something of which László opposed. He argued that they could only become the best by playing against the best-which meant men, the seasoned players. The dispute with the communist-controlled Chess Federation became bitter, and in 1981, Polgár renounced his Party membership. In retaliation, the government refused to allow the family to travel to tournaments in the West in fear of defection from the Iron Curtain. In 1988, László relented and agreed that his daughters could compete in the women’s Chess Olympiad in Salonika, Greece. For the first time, Hungary beat the Soviets, a feat that thrilled their homeland and shocked the chess world. The Polgár sisters became the royal chess sisters.

At age 19, Zsuzsa had made more money than most Hungarians could dream of earning in a lifetime. Similarly, while most of her countrymen lived their entire lives in the communist bloc, Zsuzsa has travelled the world and met dignitaries such as President Bush. She also spent time with Bobby Fischer when he fled to Budapest to outrun criminal charges in America. He had chosen Hungary partly to pursue 19—year-old Zita Rajcsanyi and because Zsuzsa had recommended her homeland for its culture and prodigious chess talent.

Zsuzsa’s accolades grew to include the first woman to qualify for the Men’s World Championship; nevertheless, she was not allowed to compete as females were not permitted. Because of Polgár, the world chess federation eventually changed its policy-as well as its name. In 1991, the twenty-one-year-old broke barriers once again by becoming the first woman to earn the grandmaster title. The lady who was once not permitted to play in men’s tournaments competed against all the big boys: Bobby Fischer, Boris Spassky, Gary Kasparov, and Anatoly Karpov. In the process, Zsuzsa sent the entrenched belief that competitive chess was a man’s domain the way of the dodo.

Only one woman who achieved more in her field-her sister Judit-who became the youngest chess master at age fifteen and the greatest female chess player of all time. She beat the previous record of American prodigy Bobby Fischer, a month older when he achieved the eminent distinction. Zsophia, at age 17, held a ranking of No. 10 among female chess players.

After Zsuzsa’s historic win, Joop van Oosterom, a Dutch billionaire, suggested the Polgárs adopt three boys from a Third World country to prove that racial barriers, as well as gender barriers, could be eliminated from the world of chess. At this suggestion, the thread defied the needle, arguing they had already proved their point.

The Polgár sisters triumphed over a communist regime and anti-Semitism, (all four grandparents were Holocaust survivors, and both grandmothers were interred in Auschwitz). Their victories stirred up the deeply chauvinistic chess world, littered with men who balked at playing with women. László called the world champion Gary Kasparov as “the Stalin of chess” when he belittled the notion of female chess players.

The sisters turned out to be not only accomplished but also well-adjusted, proof positive Polgár was not a daddy dearest. While his daughters had no trouble holding their own  playing their game, László served as their father, trainer, manager, and protector. Whenever he felt his girls were under siege, he attacked with even greater vigor than the sisters displayed when competing.

The overreaching question remains: was raising three grandmasters a result of László’s unique method of parenting, or was it an act of serendipity? The British Brontë sisters produced literary masterpieces in spite of growing up without a mother and a mercurial father who looked after his parishioners more than his three daughters. Regardless of the answer, the Polgár girls fared better than the Brontës.

The Polgár sisters, once as joined as a row of paper dolls, currently live in different countries, all married and the mother of two: Zsuana in the United States, Judit in Hungary, Zsofia in Israel and Canada. László must lament he cannot be Tiger grandfather to the next generation. In 1994, Zsuana married the American computer consultant Jacob Shutzman, and they opened a private chess club in New York City. Unfortunately, marriage proved more elusive than the moves on an ancient board, and after having sons Tom and Leeam, the couple divorced.  Abiding by her philosophy of, “There’s no crying in chess,” Susan rebounded and tied the knot again with Paul Troung who had been the chess champion of his native South Vietnam.

In 2019, the U.S. Chess Hall of Fame inducted Zsuzsa Polgár in a special event in St. Louis where she currently lives, the youngest woman ever to be so honored. Thus she joined members such as Bobby Fischer, Edward Lasker, and founding father Benjamin Franklin. In her speech, she spoke of her Hungarian and Jewish roots, as well as her determination to shatter the black-and-white squared ceiling of chess. She began on a humorous note, “After I retired from competitive chess, I was told by some people that it would be harder for me to be inducted to the Hall of Fame than to go to Mars. OK, so after tonight, Mars is a piece of cake, right?” She then switched to a serious note and revealed her iron motivation stemmed from her desire to honor her parents who had sacrificed on her behalf and to pay tribute to the members of her family who had perished in the Holocaust.

Zsuzsa Polgár, chess prodigy, carved a niche in the game of kings where she made herself queen. And thanks to her father she can say-in Hungarian, English, German, Russian, Spanish, Hebrew, and Esperanto-checkmate.