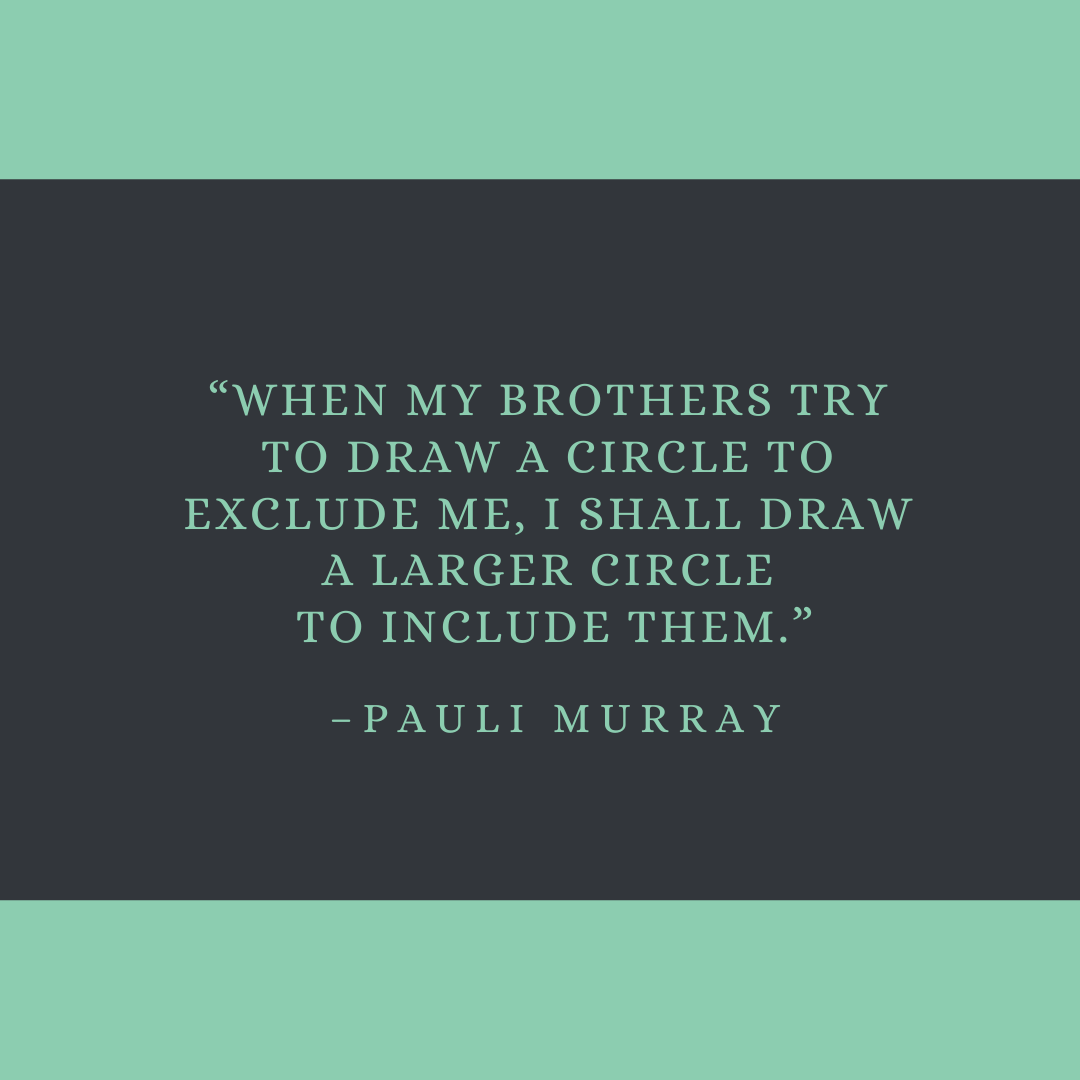 Kermit groused, “It ain’t easy being green.” It was also not easy being black, female, and lesbian, with a propensity to psychological breakdowns. However, Pauli Murray prevailed and accomplished historical female firsts.

The trailblazer was born in Baltimore, in 1910, an era when Jim Crow held sway. At age three, she lost her mother to a cerebral hemorrhage; at age twelve, she lost her father after a white guard murdered him with a baseball bat.

A gifted student, Pauli set her sights on Columbia; the rub in the academic ointment was the university was a male only domain. Instead, she enrolled in Hunter College, open only for women, a fact she viewed as another form of segregation. Her years there were marred by the Great Depression, poverty, and a marriage that disintegrated after three days. The abortive honeymoon led to her revelation that she was not attracted to men. After graduation, in solidarity with the hoboes, she rode with them across the country on freight trains.

Lacking employment, Murray applied to graduate school at the University of North Carolina despite its whites-only policy. In protest against their exclusion policy, Pauli wrote a letter to President Roosevelt; Eleanor replied. Thus began a decades long friendship between the First Lady and the radical.

The University of North Carolina never admitted Pauli, although she did get into two other notable institutions: jail and law school. In 1940, Murray was on a bus in Richmond, Virginia, and upon her refusal to take a seat in the back, her trip ended in her arrest. Determined to fight injustice, Pauli enrolled in law school at Howard University. As it was an all-black institution, she escaped racism; however, as the professors and students were all male, she suffered from gender bias, a phenomena she termed “Jane Crow.”

Disillusioned with her career at a New York City law firm, she accepted a position at the recently opened Ghana School of Law. However, as the country teetered towards dictatorship, Pauli returned to the States, a country embroiled in the civil rights movement. Nevertheless,  she dedicated most of her efforts fighting for feminist causes, and, along with Betty Friedan, became a founder of the National Organization for Women. A female Faustus, Murray enrolled in Yale Law School which, in 1965, awarded her a Doctor of Judicial Science, the first African-American to be so recognized.

Dr. Murray was a tenured professor at Brandeis when she resigned her post at age sixty-two to become an Episcopal minister though the church did not ordain females. Serendipity stepped in while she was in divinity school as the ecclesiastic branch changed their policy, and Murray became the first African-American woman to be vested as an Episcopal priest. A month later, Reverend Murray administered her first Eucharist at the Chapel of the Cross-the little church in North Carolina where, a century earlier, a priest had baptized her grandmother Cornelia, a slave. Her posthumous sainthood in 2012 paved the way for fellow black women clergy.

Despite a life far from Langston Hughes’ crystal stair, Pauli refused to give in to the hydra heads of hate. In her words, “When my brothers try to draw a circle to exclude me, I shall draw a larger circle to include them.”

– The blog is an excerpt from my book Fabulous Female Firsts: Because of Them We Can